“We stand with the Filipino people and the rest of the world to save Mary Jane Veloso from death row.”

MANILA – Up to the last minute, activists and members of progressive groups stood by Mary Jane Veloso, gathering their collective strength, focusing their efforts to do what they can to help save her from execution.

Activists gathered in Paseo de Roxas in Makati City at around 4 p.m. and marched toward the Indonesian embassy an hour later. They carried placards that read, “Save Mary Jane,” “Trabaho sa Pinas, hindi sa labas” (Jobs in the Philippines, not outside).

They were, however, not able to hold a program in front of the embassy as more than a hundred police blocked the road.

Police Supt. Ernesto Balram, who introduced himself as ground commander, said they blocked the road to keep “peace and order.” He refused to provide details on who gave the order for police to block the road. He did not negotiate with leaders.

Karapatan, in a statement, said they have received appeals signed by more than 11,000 individuals from at least 50 countries, calling on Indonesia President Joko Widodo to spare Mary Jane from execution.

“We stand with the Filipino people and the rest of the world to save Mary Jane Veloso from death row. She is a victim of human trafficking. She was betrayed, neglected by the Philippine government and from then on, suffered grave injustice and violations to her rights,” the appeal read. 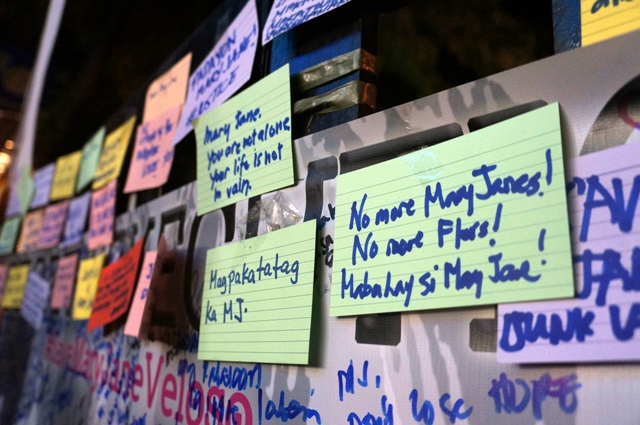 Workers from nearby offices also joined the vigil. Some lit candles and signed the freedom wall, extending their support to Mary Jane.

“Her story is the ‘usual story’ of a Filipino wanting to have a better life for her family,” Angelie Galvez, 24, told Bulatlat.com.

“She does not deserve it.”

This morning, Mary Jane’s godsister and alleged recruiter Ma. Kristina Sergio surrendered to authorities, citing threats to her life. Authorities, in turn, said they will file corresponding charges to Sergio.

Sergio, in an earlier television interview, claimed she is innocent of the accusations against her, and claimed that Mary Jane, during their stay in Malaysia, talked to strangers in the hotel lobby.

Her arrest is reportedly the reason Widodo has called for an emergency meeting with migrant rights group in Indonesia who are also calling to save Mary Jane from execution.

Garry Martinez, chairperson of Migrante International, told the media that Mary Jane’s supporters have nothing to be thankful to Sergio’s surrender as she has put a fellow Filipino’s life in danger.