How ready is the government to implement K to 12’s Senior High School in 2016?

MANILA – One more year to go and the K to 12 program will be fully implemented.

Despite what its critics called “haphazard” implementation and the looming unemployment of college teachers, the Department of Education (DepEd) is confident that it’s “all systems go” in 2016 for Senior High School (SHS).

“On this fifth year of K to 12 implementation, we are running a marathon and I can already see the finish line. We are in our last mile,” said Education Secretary Brother Armin Luistro, FSC in his presentation of the DepEd midterm report to the 16th Congress on the K to 12 Basic Education Program.

Luistro said that of the 7,941 public high schools in the Philippines, only 5,800 public schools are set to offer SHS. 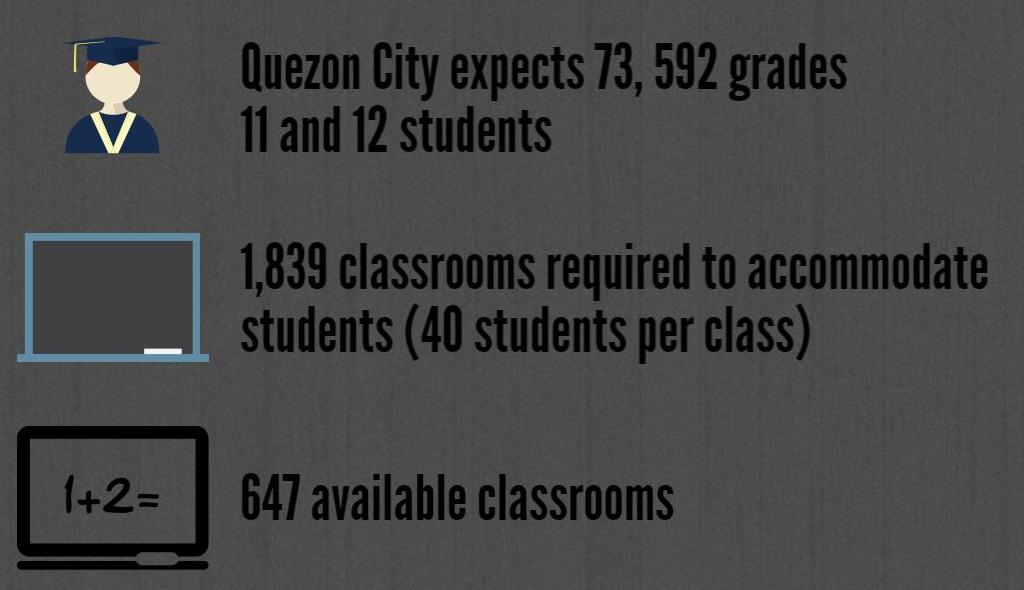 Critics who have said from the start that the K to 12 program does not improve the quality of education see a disaster unfolding.

San Juan said that through the years, the government has never allocated more than four percent of the country’s gross domestic product (GDP) for education despite the global standard of at least six percent.

Despite DepEd’s optimism on its preparations for SHS implementation, the fact that it will not be provided by all public high schools in the country poses a serious problem.

Louie Zabala, president of the Manila Public School Teachers Association (MPSTA) said ideally, all public schools should accommodate all incoming SHS students. He said in the first place, these students are in public schools because they cannot afford to enroll in private schools.

Based on the data acquired by the Alliance of Concerned Teachers (ACT), in Quezon City alone, more than 1,000 classrooms are needed in order to accommodate incoming SHS students in 2016.

But Priscilla Ampuan, president of the Quezon City Public School Teachers’ Association (QCPSTA), and a high school teacher in Doña Rosario High School, doubts if such plans are enough.

“All procurements in preparation for K to 12 should have been made two years ago. Why only now when we only have barely a year?” she said in an interview with Bulatlat.com.

Zabala said the F.G. Calderon Integrated High School where he currently teaches will not offer SHS, and their students will have to transfer to other schools.

Zabala added that Grade 10 students who will be not accommodated in public schools will be given P15,000 ($339) to pay for tuition in private schools.

In Muntinlupa, only four out of eight public high schools will offer SHS and not all tracks are available in the four schools. The three tracks offered under K to 12 are: Academic, Technical-Vocational-Livelihood; and Sports and Arts.

“Students can look for other schools that offer tracks they are interested in taking,” Anaya said in an interview with Bulatlat.com.

She said that construction of additional buildings has started in the four schools, which include MSHS.

Zabala said teachers who are at the forefront in the implementation of government Aquino’s K to 12 program are even more burdened, because their salaries remain low. This unresolved issue is as basic as the lack of classrooms and chairs, and he said the “haphazard” implementation of the program makes it more of a burden to the teachers.

Teachers complain of the lack of modules and books appropriate for the K to 12 program. Ideally, Zabala said, textbooks and modules should have been distributed before the school year.

“There is a curriculum, but what we teachers, and the students, also need are textbooks and modules,” Zabala said.

Anaya said with the absence of the modules, they had to make their own so that students will have something to use. She said she had to research online based on the curriculum given by the DepEd.

Mass trainings will also be held in the first week of May, which, Zabala said, have proved to be ineffective.

“Five days of training is not enough to swallow all that is in the thick pages of books that were discussed during the training. The first two days of the training is just all about appreciation of the program, and it is only on the third day that training begins,” Zabala told Bulatlat.com.

Zabala also mentioned that teachers who will teach in grades 11 and 12 are required to get a National Certificate one and two (NC 1 and 2) issued by the Technical Education and Skills Development Authority (Tesda). Teachers have to undergo an assessment by Tesda, with fees ranging from P100 ($2.26) to P700 ($15.85).

Teachers have to spend their own money to get national certificates.

“This is a burden, because teachers’ salaries are not enough for their own expenses and on top of that, we also spend for our teaching needs, researches,” Zabala said.

Mañego said her school also held a forum on K to 12 with the parents, and conducted surveys asking parents on what track their children will take.

The teachers had also attended Tesda seminars to get their NC 1 and 2, Mañego said. The construction of classrooms has begun, with donations from a local businessman. She also cited the school’s tie-up with a local political party that agreed to provide equipment for the school.

The available tracks to be offered are: for the Academic track, General Science, Stem; and for the Technology-Vocational, classes in Cookery, Agriculture and I.C.T (Computer Hardware System).

“Our school is ready for K to 12,” Mañego said. “We already have partnership with different institutions, such as the factories, for the internships of our students,” she added.

Zabala said when the first leg of the K to 12 was implemented, the government was not ready and lacked classrooms, chairs and most specially teachers, for the Kindergarten pupils.

He said the DepEd has even violated the Philippine Teachers Professionalization Act of 1994 which requires all teachers to pass the Licensure Examination for Teachers (LET) for hiring volunteer teachers for Kindergarten pupils.

“It (DepEd) will again violate this law when they let professors from the tertiary level who will be displaced in the full implementation of the K to 12 program, to teach SHS even if they (have not passed) LET.”

In his paper, San Juan cited 10 reasons why K to 12 should be suspended.

“The government is not prepared to implement a 12-year Basic Education cycle as mandated by K to 12, as manifested by the actual insufficiency of classrooms, libraries, toilets, and other facilities; textbooks, modules, and other instructional materials; teachers, non-teaching staff, maintenance staff and other education sector personnel in the old 10-year Basic Education Cycle,” he said.

He also added that based on the National Achievement Test (NAT) result in recent years, the over-all quality of education in the Philippines is bad and stagnant if not declining.

He said the only way to improve the quality of education is to prioritize improvement of facilities and teacher training, and most especially, increasing the salaries of teachers and non-teaching personnel.

Again, Zabala reiterates that quality of education will not be achieved as long as all the existing problems are not addressed.

“Will a student appreciate the lesson if the room is jam-packed and there are not enough electric fans or there are no chairs to sit on? How can the teachers concentrate on their teaching when in the back of their minds, they are thinking of where to get food for the next day, or where they can borrow money so they can still come to work the next day.” (With reports from Kathrina Manuel)