“For months commuters have been squeezed dry by unjust MRT fare hikes even as the quality of train service has diminished or has even become hazardous.”

MANILA – A few weeks ago, the public received assurances of improvements in the Edsa-bound MRT with the repairs on its defective rails. Other repairs were done also but on parts of MRT operation that do not touch on the trains’ actual running. These included rewiring to make the purchase of MRT (Metro Rail Transit) ticket “contactless” with a ticket seller (they call it ‘tap and go’), and repairs of MRT toilets funded by the Department of Transportation and Communication.

Despite the rail repair that at times also delayed MRT operations last March, problems continue to hound the operation of the train system. Designed for 350,000, it is now ferrying up to 600,000 riders daily, amid numerous allegations of neglect in maintenance.


This Monday May 11, hundreds of frustrated commuters were forced to ride buses after having lined up for ages in queues that extended from North Ave. MRT station to Mother Ignacia St. near the next station at Quezon Avenue. The cause, based on breaking reports quoting the Traffic Control Center of MRT, was the reduction of regular train in operation from 20 trains to eight.

Party-list group Anakpawis criticized the MRT management for using only eight trains in the coming weeks to accommodate around 600,000 daily MRT commuters.

“The decision of the MRT management to limit its operation to only eight trains from twenty functioning trains is a total disservice to all the MRT commuters. The move is highly unacceptable especially to the commuting public who have long been provided with very poor train service,” Anakpawis party-list Rep. Fernando Hicap said in a statement.

The Anakpawis party-list lawmaker said the MRT management is obligated to explain to the public why it unilaterally decided to cut down train use. Hicap also said that despite the upgrading of the ticketing system and fare hike, train operations in general seemed to have worsened.

Since the imposition of higher fares this January in MRT, its ridership has dropped but its earnings have increased, the commuter group RILES Network said. It estimated that the MRT ticket sales now amount to P7 million per day compared to P5 million to P6 million per day before the January fare hike.

The sales per day of the North Avenue station alone are now estimated to be P1 million at least per day. The daily sales of the Cubao station increased to P 1 million from P700-800 thousand.

Unfortunately, as Hicap of Anakpawis noted, there were still no improvements in MRT services since the fare hike. “Train glitches gradually become rampant, commuters continue to suffer hours of waiting in lines and elevators and escalators are not functioning,” Hicap said in an earlier statement.

From discussions with employees of MRT, Sammy Malunes, spokesman of Riles Laan sa Sambayanan (RILES) Network and longtime union president of employees in LRT (Light Rail Transit), shared how not only the passengers but the operations personnel also of MRT are now always at risk everytime the train runs. 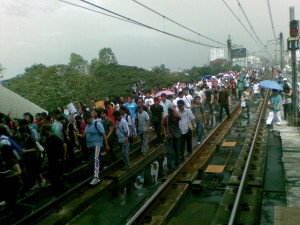 He blames the compounded effect of years of neglect especially under the Aquino government, when maintenance contracts were awarded to allegedly inexperienced, undercapitalized companies with links to leaders of Aquino’s Liberal Party.

As of March this year, Malunes said, only 16 trains were being provided to MRT operations personnel and of these, some would malfunction from time to time, further reducing the number of serviceable trains.

He said the 20 MRT trains that used to function under the Japanese maintenance firm are now no longer in action. The problem is lack of spare parts.

“The technicians themselves told us they are just there (in their work area) but there are no parts,” Malunes said. Without parts, repairs cannot be done, and what used to be a small damage would soon get bigger, and then the whole thing becomes unusable save for being cannibalized for parts.

As for the defective rails, some were indeed replaced last March, said the RILES Network, but the replacement apparently came from rails in MRT’s stabling area (which is like the MRT trains’ parking area in its depot). Some rails also remain problematic that the MRT drivers, Malunes said, are prompted to pray and thank their stars for every safe trip.


“Because the train system is defective – its employees say its rails have cracks and worse, even gaps; its trains and equipment are decrepit and improperly maintained – its supposed 65kph speed was reduced to 50 kph in 2014, and this year to just 40 kph,” Malunes said. The train’s speed would be even slower when it passes through rails with cracks or gaps, he added.

He said the rails and trains are not the only problem, because the sensors and safety indicators are also not being properly maintained and repaired.

The reason some MRT trains would stop at times is the defective sensor, Malunes said.

But often, as in the time when an MRT train overshot the rails, Malunes said, it is the MRT drivers who are being blamed for each mishap.

Both the riding public and the different sets of workers behind the MRT operations and maintenance are suffering from the train system’s neglect and disrepair, Malunes of RILES Network emphasized.

Of the MRT’s operations personnel of around 700, Malunes estimated that only 56 are regular on the job, the rest are what they call as permanent contractuals.

These operations personnel include the train drivers (estimated to be less than 90 now) and the ticket sellers (estimated to be 365 and in danger of retrenchment due to electronic ticketing). They are employed by the government through the Department of Transportation and Communications (DOTC), and it is they who suffer first-hand the ire of riders, and the danger of each ride, Malunes said.

These workers also have ongoing issues with the government because their overtime pay are not being paid on time, and they have to fight for it.

Meanwhile, the mostly contractual workers in the private company maintaining the rails and the trains are in an even more miserable conditions, said Malunes.

“Nakakaawa sila. They have no benefits, SSS, they just work for job order,” Malunes told Bulatlat.com. He estimated this group to be around 100 shifting workers, composed of workers on heavy and light maintenance, or workers at the depot and at the main line. Malunes said they are on call at all times, yet, some of them were unable to finish the job because of lack of parts or equipment. And some are not being paid because according to them, their employers told them the DOTC is not paying their company or is late in paying their company.

Given that there are billions of budget allotted to MRT, why is the train system not being properly maintained? Why are there no adequate parts? For the sorry state of the MRT now, progressive partylist representatives have long been demanding the accountability and liability of DOTC and MRT officials. Last February, Hicap has called for “heads to roll in the DOTC and MRT management” for having hired what he calls as unreliable MRT service providers.

“In recent years, the DOTC and the MRT management knew about the technical operational problems of the MRT but they did not do anything about it. The DOTC continues to ask for MRT’s operational budget including its maintenance but MRT’s performance says it otherwise. What happened to the millions of pesos budget for MRT’s maintenance?” Hicap asked.

According to Hicap, the Aquino government’s Public-Private Partnership (PPP) program has only preserved the interest of private corporations for profit while sacrificing the welfare of the commuting public. MRT is being operated by the government, but it is owned by Metro Rail Transit Corp. led by businessman Robert John Sobrepeña.

“For months commuters have been squeezed dry by unjust MRT fare hike even as the quality of train service has diminished or has even become practically hazardous,” Hicap said. He concluded that “Once again, the Aquino government, the DOTC and the MRT management have all displayed their incompetence and anti-train commuter policy.”