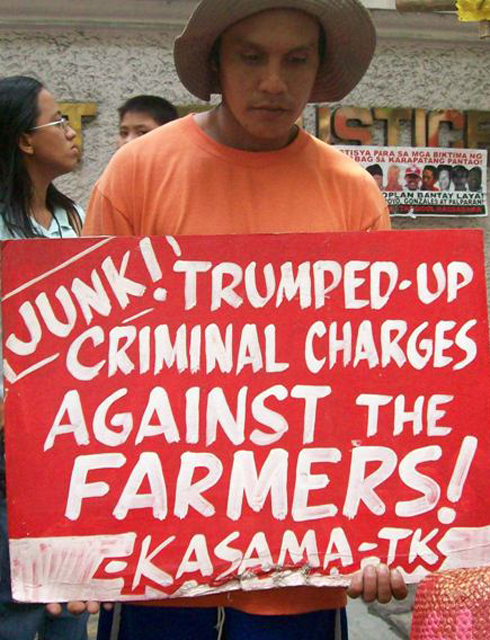 “We are thankful that truth and justice prevailed.”

MANILA – Three farmer-activists who had been detained in Laguna province for five years were released yesterday, June 1, after a court dismissed the charges of illegal possesion of firearms and explosives against them.

Darwin Liwag, Reynaldo Malaborbor and Aries Cuazon were freed shortly after the Sta. Cruz Regional Trial Court Branch 91 in Laguna granted their demurrer to evidence, with the failure of the prosecution to provide convincing evidence and testimony against them.

The three were arrested in the first 100 days in office of President Aquino.

“The cases were clearly trumped-up, intended to silence critics of the administration, but with an officer of the AFP (Armed Forces of the Philippines) caught lying under oath,” he added.

The three were on a jeepney on their way to Sta. Cruz, Laguna on Oct. 5, 2010 when they were arrested in Lewin village, Lumban by soldiers and local police, and brought to the military camp of the 1st Infantry Batallion in Cavinti. They were dubbed as the Lumban 3.

In a hearing last year, Lt. Aaron Nasataya testified before the court that they arrested the three farmers in a checkpoint, because they noticed a bulge on Liwag’s t-shirt. He said they asked Liwag to alight the vehicle and they discovered that an Ingram, a long fire arm, and gun magazines were tucked in his pants.

“Why would he tuck a long fire arm in his pants when he could have hid it in the bag he was carrying at the time? Would he be that stupid, especially since the military is claiming he is a high-ranking NPA?” he said in a phone interview.

Pahilga said that there was never a checkpoint. The three were on board a jeepney, when they were followed by a military truck, which then overtook and blocked the jeepney.

The so-called Lumban 3 were accused as high-ranking officers of the New People’s Army.

Pahilga told Bulatlat.com that the military initially refused to hand them over to the provincial jail as they were “high military targets.” They stayed in the military camp for nearly a month, where they were interrogated, threatened and were forced to falsely admit that they were guerrilas.

Pahilga added that the military was eventually forced to transfer them to the provincial jail, following a court order on their detention.

Liwag is the secretary general of the Pagkakaisa at Ugnayan ng Magsasaka sa Laguna (Pumalag), a local peasant organization in Laguna province. Malaborbor and Cuazon are staff members of Pumalag.

Pahilga said he would consult the three farmers if they plan to file charges against the military. Although they are now free, “the fact remains that the three were incarcerated for five long years,” he said.