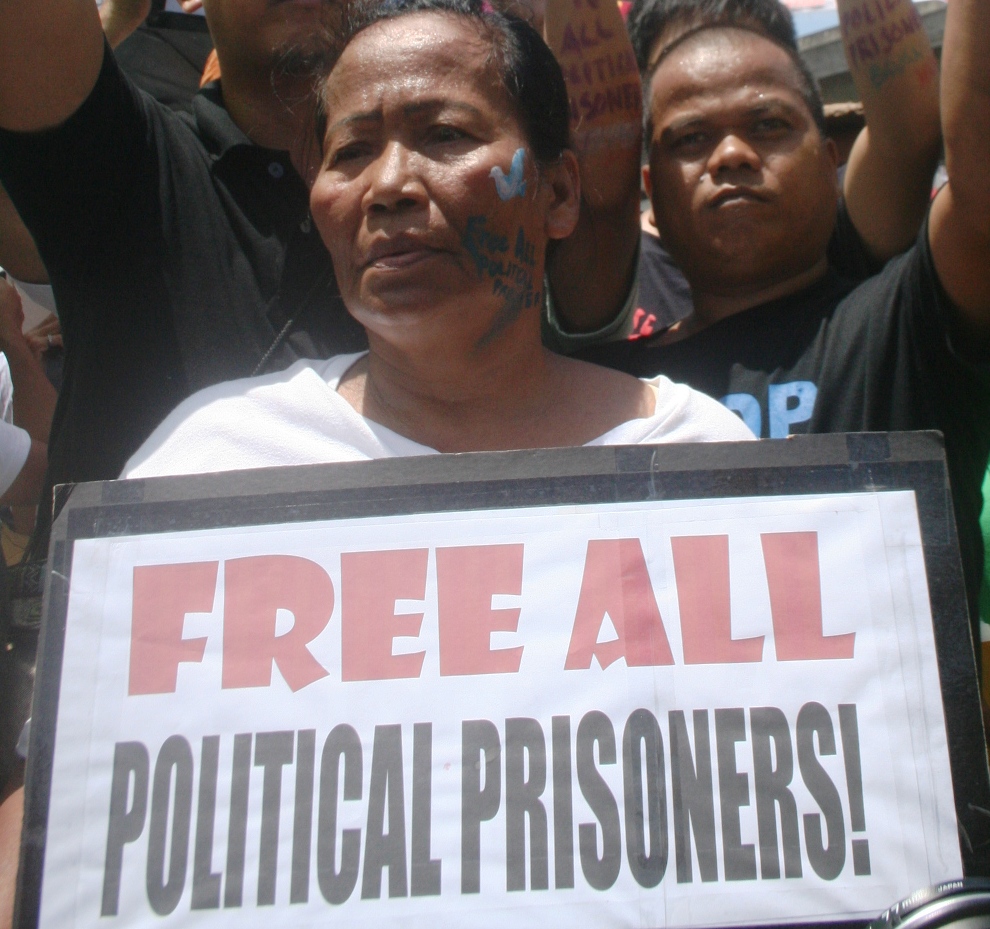 “The arrest and detention of Adelberto Silva, Rosanna Cabusao and Isidro de Lima are illegal and most unjust.”

MANILA — Workers led by national labor center Kilusang Mayo Uno and members of Gabriela women’s alliance picketed Camp Crame’s Gate 2 along Santolan Road in Quezon City June 9 to call for the immediate release of all political prisoners in the country including the three political detainees arrested a week ago.

The groups called for the release of Adelberto Silva, a veteran labor organizer and currently a peace consultant of the National Democratic Front of the Philippines, Rosanna Cabusao, a women’s advocate and former officer of Gabriela, and their companion, Isidro de Lima. The three were arrested in Bacoor, Cavite on June 1.

“I know Sharon personally and I know for a fact that she does not and cannot take part in any activity involving explosives or grenades. I visited her in detention and she attests, ‘hindi nga ako marunong humawak ng kwitis, granada pa!’ (I could not even hold fireworks, much less a grenade.) De Jesus said after visiting the detainees last week.

De Jesus appealed for their immediate release in the light also of Cabusao being on medication for thyroid ailments and blood-related diseases. “Her current situation could worsen her medical condition. We appeal for her immediate and unconditional release.”

“The arrest and detention of Silva, Cabusao and de Lima are illegal and most unjust,” said Roger Soluta, KMU secretary-general. He said the three do not deserve such treatment as they are not criminals. “They are activists and revolutionaries being persecuted by the government for fighting for radical changes in society,” Soluta said.

The two groups also said the arrest was illegal because Silva is protected by the Joint Agreement on Safety and Immunity Guarantees signed by the NDFP and the government of the Philippines in 1995 to ensure the peace talks would proceed.

The groups maintained that the charges of illegal possession of firearms and explosives against the three were fabrications, based merely on planted evidence, and filed only in an effort to justify their detention.

In doing that, “The government is making a mockery of its own laws,” Soluta of KMU said. He said the three were unarmed and not committing any crime, just resting, in fact, when they were arrested in that house in Molino, Cavite.

The labor leader also condemned the numerous fabricated criminal cases of murder and frustrated or attempted murder that were filed before the courts in Aparri, Cagayan and Laoang, Northern Samar against Silva.

The KMU said that in arresting a peace consultant like Silva and the persons with him at the time, the government is demonstrating its “refusal to address the root causes of poverty.” It decried the government’s pursuit of a militaristic mindset in facing the armed conflict, instead of solving the causes of unemployment, poverty and hunger.