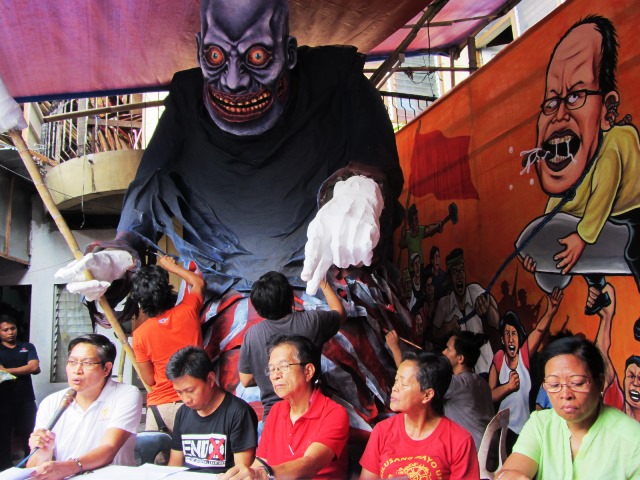 A man who introduced himself as a soldier approached Renato Asa, public information officer of labor center Kilusang Mayo Uno (KMU), to recruit him as an informant of the military, and issued a veiled threat telling him his life is in danger if he refused.

MANILA – Renato C. Asa, secretary of the public information office of labor center Kilusang Mayo Uno, received a “recruitment offer” he could not forget as he was coming out of his family’s residence in Quezon City early Monday morning June 22.

A man who introduced himself as a soldier approached Asa, or RC to his colleagues, to recruit him as an informant of the military, and issued a veiled threat telling him his life is in danger if he refused.

When Elmer “Bong” Labog, chairperson of KMU, learned of this, he condemned the “clear case of harassment” against one of their officers. Asa’s office in KMU is in charge of issuing the labor center’s press releases, primers, pamphlets and other information and education materials. He said the harassment aims to silence the labor center or disrupt its work.

Labog said the soldier, who refused to state his name and his unit, had packaged the threat he delivered to Asa as if it was an “offer of help”. The “soldier” asked Asa to decide immediately about “cooperating” with the military, “before it’s too late.”

In a statement, KMU likened the harassment of Asa with those experienced by members and leaders of the Confederation of Unity, Recognition and Advancement of Government Employees (COURAGE). In both cases, the military recruiters wanted the members and leaders of legal, organizations to work for them as “informants.” At the same time, the military recruiters presumed the persons they are “recruiting” are rebels despite their affiliations to legal, government-registered organizations.

Last year’s report of the Center for Trade Union and Human Rights noted the increasing number of workers slapped with trumped-up charges. From 28 workers in 2013 who were slapped with false charges, 49 workers were charged in 2014 while 15 workers were arbitrarily arrested and imprisoned as a result of these false charges filed against them.

Charges filed against unionists range from minor crimes such as alarm and scandal to more serious offenses like illegal possession of firearms and explosives and murder, the CTUHR report said. It said the charges were also meant to harass local workers, to quell local organizing or actions or to implicate union leaders in armed offensives of the New People’s Army as part of the government’s counter insurgency program.

“The Aquino government’s implementation of anti-poor and anti-worker policies goes hand-in-hand with the repression of pro-people and workers’ organizations whom it accuses of being ‘communist fronts,’ Labog explained. As Aquino prepares for his final State of the Nation Address, he is expected to intensify the repression of groups exposing the real state of the nation, Labog said.

Aside from KMU, various human rights organizations have decried the persecution of leaders and organizers of labor groups and of other people’s organizations as part of the Aquino government’s counter-insurgency plan Oplan Bayanihan.

Labog warned that they will hold the Department of National Defense and the Aquino government liable should Asa and other labor leaders and activists experience any form of intimidation, harassment, or violence in the future.

“Instead of improving the plight of working people, the Aquino government is only intensifying its attacks on unarmed activists who serve the working people,” Labog said.