Aquino’s Final SONA | ‘Our art is our voice’ 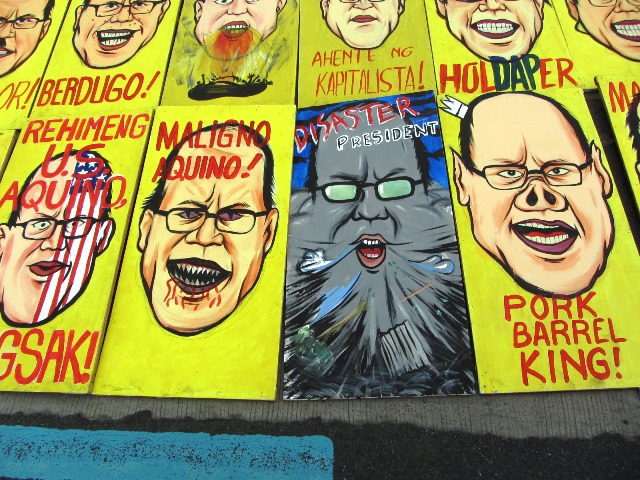 Artists bring their art, songs and dance to depict the people’s lives at the SONA protest.

MANILA – For Aquino’s sixth and final State of the Nation Address, protesters went all out with this year’s program amid an overcast sky and rain.

This year’s effigy was conceptualized by Bagong Alyansang Makabayan-National Capital Region and created by Ugat Lahi Artist Collective which was a 13.5-foot depiction of President Aquino riding a decrepit MRT carriage with the words “Impyerno” and “Kamatayan” emblazoned as its destination.

“The concept of the effigy is the broken-down MRT train that symbolizes the ‘daang matuwid’ of Noynoy which has led to harm and death. It also reflects the misgovernment of Aquino and his administration in its five years of rule,” Rensi Managase of Ugat Lahi Artist Collective said.


“It shows the everyday struggle and suffering of a commuter which is also a metaphor for the other struggles Filipinos face such as corruption. The broken down train symbolizes the rotten government and the President’s indifference to the people’s suffering,” said Renato Reyes Jr., Bayan secretary general.

The rain failed to dampen the people’s spirits. A multitude of performances was presented during the program of the “SONA ng Bayan.”

“We wanted to increase the people’s awareness through songs, and we believe that the Filipino talent must have significance,” Saivitri Villareal of LAPIS said.

Meanwhile, Sining Kadamay sang most of the program’s songs that covered a range of topics from imperialism to unity of the people.


“As an activist rapper, I get my inspiration from immersing in all the different communities. I see their experiences and I am inspired by those who are trying to free themselves from where they are,” said Francis Diaz, a member of Ugat Lahi and Sining Bugkos.

He said that he used hip hop as his genre of music because it echoed the trials of the people who struggle against a dominant power. Hip hop became popular in the 1960’s among African Americans in breaking down racial discrimination through music and dance.

In the mainstream genre, Sining Lila of Gabriela performed a song number to the tune of “Worth It” by American pop group Fifth Harmony. But they changed the chorus to “Noynoy, you’re worthless” to sum up the President’s five years in power.

“It is a judgment of the women on Aquino’s worthlessness concerning the issues of the people, especially women,” Jane Balleta of Sining Lila said. She cited the issue of K12 which she said affected mothers, as well because of the additional costs of in education.

The Central Luzon Aeta Association (Claa) performed their ancient war dance in response to the land grabbing recently by big corporations such as Aboitiz.

The war dance depicted arm movements that show the tribes taking up arms and using weapons, this time guns, in defending their ancestral land. “We fight through legal processes too, but we know that the law doesn’t favor the Aetas and in some cases, the fight becomes an armed one and the dance represents our determination to fight for our freedom,” Sonny Serrano, chairman of Claa said.

Street artists from the University of the Philippines Asosasyon ng Kabtaang Artista, Kritiko at Iskolar ng Sining at Kultura (UP ASTERISK) also joined in the people’s SONA. They created a street art that depicted Aquino with his tongue illustrated as a road towards a row of jagged red teeth.

“This represents our condemnation of Aquino’s administration. His ‘tuwid na daan’ caused the deaths of many Filipinos just to implement changes that he says will change the system,” said Mikka Cabangon of UP ASTERISK.
.
“Art is an important weapon and is an integral part of changes in society, and our art is our voice,” she said.