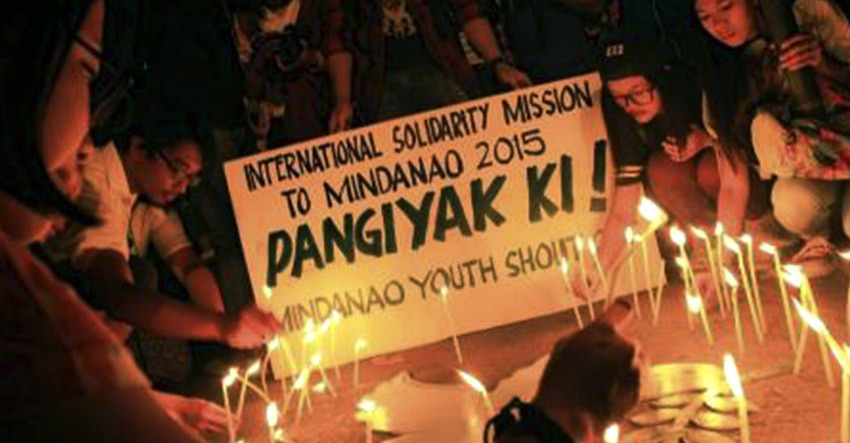 “Hearing the problems of the lumads (Mindanao’s IPs), they really inspire you and put your problems in perspective.”

DAVAO CITY – Young Filipino-Americans who spent a week in Mindanao formed an alliance with their local counterparts to “strengthen” the campaign for human rights and protection of the environment.

The alliance name, Senubaden, is an indigenous Bagobo term meaning “unity arrived at after an assembly”.

The young Fil-Ams joined 300 other youth for “Pangiyak Ki! (Mindanao Youth shout out for human rights and ecological justice).”

United States-based North America-Philippines Solidarity Affair (NAPSA) and the Kapit-Bisig Kabataan Network (KBKN) sent 23 of their members to the Philippines for the activity.

The activity ended with “Pinoylympics” or a sportsfest.

It was the first time 20-year old Justine Figuerres set foot on the Philippines. “And it’s not to shop around in Manila or to go to the beaches,” she said.

“I get to sleep in a maybe six by twelve foot house with only tarpaulin walls and no doors of the Talaandigs who are fighting for their ancestral land,” said Figuerres.

She was among the youngest members of the 23-member contingent of KBKN.

Figuerres said she “did research” on the situation of IPs before she came to the Philippines “but it’s actually a very different realization (even) just for a short time.”

“Hearing the problems of the lumads (Mindanao’s IPs), they really inspire you and put your problems in perspective. They have to experience it every single day and not by choice,” she said.

“I had no idea that a single person can possess so much determination,” she said.

Figuerres said one of the problems of the Talaandig IPs was how “ranchers made an agreement with them that they would occupy the lumads’ land in exchange for cattle.”

“The contract ended in 2009 but the ranchers did not leave. The lumads believed the ranchers are behind the threats and intimidation. Their houses have been destroyed and they were shot at. There were bullet holes in the ceiling,” she said.

Figuerres said it was “hard to mentally prepare” for the experience she had with the Talaandigs.

“I did not learn about this in school; the history and the politics behind it is really deep. Sometimes it’s a lot to take in,” said Figuerres, a fourth year electrical engineering student at the University of California, Los Angeles (UCLA).

Figuerres said the “situation of the lumads is not just a front” and that one of their most immediate goals as a group is to “share their (lumads’) narratives.”

She said they have to “report back” to the members of their organizations and “start a social media campaign or adopt a school (Save Our Schools Network), start fund raisers.”

“(It’s about) getting the story out there,” she said.

“The alarming human rights situation in Mindanao is an undeniable proof that justice and genuine peace remain elusive,” he said. Reposted by