“Instead of prohibiting the consumption of infant formula milk, the Aquino administration has partnered with a company that targets Filipino children.”

MANILA – Rachel (not her real name), 26, thought that having inverted nipples would make breastfeeding impossible. When she gave birth to her first newborn, she did not get any medical advice about breastfeeding from health professionals and so, she gave her son infant formula milk.

Rachel spends P4,000 (US$86) a month for infant formula. Her son Matthew, now 10 months old, has been hospitalized three times for various illnesses.

Rachel is just one of the thousands of Filipino mothers who are burdened with the consequences of feeding their children with formula milk.

A 2009 study by the International Lactation Consultant Association among infants younger than six months in Manila showed that formula-feeding was associated with increased odds of hospitalization for any infectious cause, pneumonia, and diarrhea compared to exclusively breastfed infants.

According to the 2013 National Nutrition Survey, only 28 percent of Filipino infants are exclusively breastfed up to six months.

The Department of Health (DOH) revealed that such low breastfeeding practice in the country contributes to 800,000 infant deaths worldwide.

The World Health Organization (WHO) estimates that 16,000 number of child deaths in the Philippines per year can be traced to formula feeding. 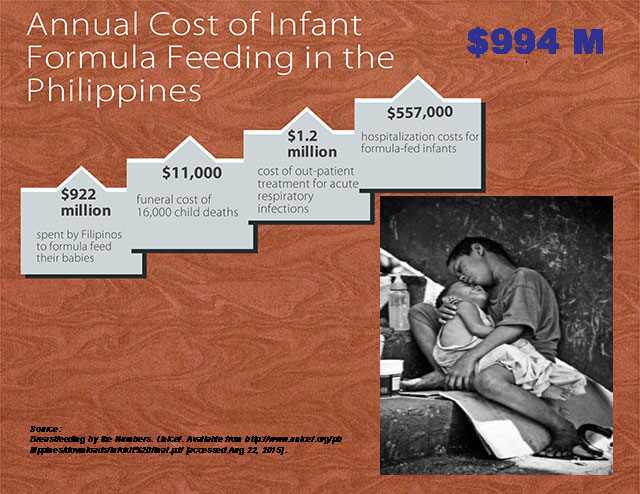 According to Unicef, babies who are formula-fed are also more vulnerable to asthma, allergies, childhood cancers, Type 1 diabetes during childhood and later in life, cardiovascular disease, obesity, gastrointestinal infections and ear infections.

Seven infant formula brands have been withdrawn from the market and classified as potentially life threatening by the United States Food and Drug Administration. Between 1982 and 1994, the US FDA recalled 22 infant formula products due to either deficient or excessive amounts of certain nutrients.

In 2006, Wyeth destroyed batches of its infant formula milk that had rust on the cans.

In the first half of 2006, more than $100 million was spent on the advertising of infant formula milk, according to a report from AC Nielsen.

Filipino mothers exposed to infant formula milk ads are 6.4 times more likely to stop breastfeeding babies within one year of age, a 2011 study published by the Social Science and Medicine Journal revealed.

A similar study in 2009 stated that ‘voracious global marketing by the formula-milk industry over the past 60 years has …dislodged breastfeeding as a viable and desirable strategy for infant feeding.’

Even families with young children living on less than $2 dollar per day purchased formula milk, according to a 2003 study published in the Journal of Human Lactation.

The Milk Code explicitly requires the labeling of infant formula products with the following messages in English and Filipino :
1. Breastmilk is best for babies up to two years of age and beyond;
2. Important Notice: There is no substitute for breast milk; and,
3. This product may contain pathogenic microorganisms and must be prepared and used appropriately.

Milk Code also states that the information display panel of infant formula should also include the messages “The use of infant formula/milk supplements must only be upon the advice of a health professional,” and “The unnecessary and improper use of this product may be dangerous to your child’s health.”

Andaya-Castillo noted that since 2010, such messages have disappeared from the advertisements of infant formula milk. Her group Breastfeeding Philippines has initiated an online petition https://www.change.org/p/president-benigno-s-aquino-iii-department-of-health-secretary-janette-loreto-garin-please-bring-back-breastfeeding-messages-to-all-non-human-milk-advertisements to bring back the messages to all non-human milk advertisements and to regulate the marketing of so-called milk supplements for 0-3 years old children.

Andaya-Castillo also questioned the partnership between the Food & Nutrition Research Institute (FNRI) of the Department of Science and Technology and Nestle Philippines.

Nestle, a company that manufactures infant formula milk and other food products intended for babies, has embarked on a campaign called United for Healthier Kids. The FNRI is part of the “advocacy.”

“Instead of prohibiting the consumption of infant formula milk, the Aquino administration has partnered with a company that targets Filipino children,” Andaya-Castillo said.

The breastfeeding advocate added the DOH is not fully implementing the Milk Code and Republic Act 10028 or Expanded Breastfeeding Promotion Act.

RA 10028 provides for the establishment of lactation stations in establishments and institutions. The law also states that nursing employees are entitled to break intervals in addition to the regular time-off for meals to breastfeed or express milk.

In a statement released last week, Health Secretary Janette Garin said that non-compliance to lactation breaks, and unavailability of lactation stations in workplaces are among the factors that hamper continuous breastfeeding.

Andaya-Castillo said that while the DOH promotes breastfeeding, there should also be protection and support for Filipino mothers.