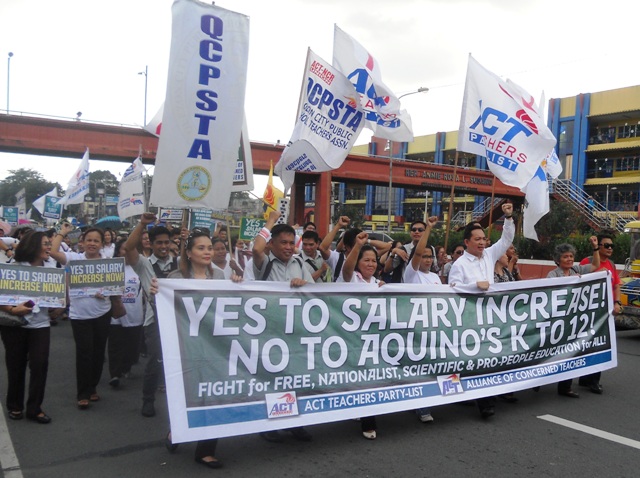 MANILA – Just as they persevere to teach their students, the tireless teachers once again took to the streets by the thousands to demand salary increase.

“We will not stop until the government gives what is due to us,” said France Castro, secretary general of the Alliance of Concerned Teachers (ACT) during a protest in front of the House of Representatives’ South Wing gate, on Tuesday, Sept. 8.

The protesting teachers were surprised to see steel barriers a few meters from the gates. “Looks like they prepared for our arrival. What are they afraid of?” Castro said. She lambasted the congress security for preventing them to get near the gates.

Bayan Muna Rep. Neri Colmenares spoke at the protest and commended the teachers who diligently join protests to press government for a salary increase.

Colmenares said there are funds that can be used for the salary increase of government employees. He cited the P30 billion funds ($639 million) under the Risk Management for Performance Undertaking in the proposed P3 trillion 2016 national budget.

He said the funds will only be used by the government to “settle its sovereign guarantee pledges to private contractors or concessionaires.”

Colmenares explained that with the Aquino government’s favors for big business, the funds may be used only as payment to the private concessionaires of the MRT and LRT, and the Maynilad and Manila Water if water price hikes are stymied by people’s protests. Colmenares pointed out that this money is the tax payer’s hard earned money.

ACT Teachers Partylist Antonio Tinio, meanwhile said the pensions of soldiers are not deducted from their salaries, unlike teachers and other government employees. “We pay for their retirement pay,” said Tinio.

He said ordinary government employees get salary deductions to fund half of their pension. He said the government should fix this unequal treatment of teachers and the military, who are just being used to terrorize the people in the countryside, said Tinio.

Benjamin Valbuena, national chairperson of ACT and president of the ACT-National Capital Region Union said the P50.6 billion (P1.078 billion) proposed funds for salary increase in 2016 is an insult to teachers and other government employees.

Divided among 1.4 million government employees, this amounts to only P3,000 ($64) increase per employee.

He stressed that a family of four needs at least P30, 000 ($640) a month in order to sustain their basic needs, yet public employees make do with their salary amounting to P18, 549 ($395) per month. “This is the reason why majority of Filipino public school teachers are tied to debts to loan sharks,” Valbuena said.

One of the protesters, Teacher Diane, a science teacher in Quezon City said she believes that teachers are not paid enough considering the workload they have.

“We shell out from our own pockets for the students’ needs. But, we also have to provide for our family. Nothing is left,” she told Bulatlat.com in an interview.

The protest kicked off of the series of mass actions for National Teachers’ Month, which, Valbuena said, gives them no reason to celebrate as the government continues to neglect their call. Also on Sept. 8, in the morning, public school teachers held a sit-down strike.

The teachers also called for zero budget for the Department of National Defense amid the escalating human rights abuses committed against the people, the most recent of which was the killing of their fellow educator, Emerito Samarca, executive director of Alternative Learning Center for Agricultural and Livelihood Development (Alcadev) in Lianga, Surigao del Sur.
The protesters condemned the killing of Samarca, Dionel Campos and Datu Juvello Sinzo.

“The Congress should stop allocating funds to these butchers. The DND should not receive a single centavo from the people’s money. We call on them to rechannel these funds instead to teachers’ and employees’ salary increase, education and other social services,” Valbuena said.