“The penalty payments are the result of an onerous contract entered into by the Aquino government and the winning bidders. This is a form of sovereign guarantee that will be borne by taxpayers.”

MANILA – Secretary Joseph Emilio Abaya of the Department of Transportation and Communication (DOTC) disowned this morning September 5, 2015 the unsigned letter he reportedly wrote seeking the release of billions of pesos from budget allotted for sovereign guarantees. But he did not categorically deny that he had indeed asked Budget Secretary Florencio Abad for something like that.

Bayan secretary general Renato Reyes Jr revealed this morning in a national TV broadcast that they received last night a copy of Abaya’s letter to Budget Secretary Abad, dated August 7, asking Abad to release P7.519 billion (over $160-million) as penalty payments to the Ayala-Pangilinan consortium Light Rail Manila Corp. The copy of the letter he showed the media has no signature of Transportation Sec. Abaya, but, Reyes said, their reliable source has Abaya’s signed copies.

The request for billions of public funds as “penalty” to be paid by the government to the private group before the latter takes over LRT1 is alarming for many reasons, Reyes told reporters. For one, he said it represents a big example of how public funds are already being turned over to private groups owing to the “onerous privatization contract” or concession agreement of LRT1 and its expansion to Cavite.

Of the P7.519 billion Abaya is allegedly asking the Department of Budget Management (DBM) to release for the LRMC (Light Rail Manila Corp), some P5 billion ($107-million) are penalties because the government would be turning over the LRT1 to the private group lacking the contract-stated number of train coaches, there are leaking roofs, the operation is below their agreed upon frequency of trips, the structural integrity of some aspects of the train system is not up to international standards, among others.

“If we’re going to spend billions for the improvement of LRT1, then why are we giving it away to private groups?” asked Reyes.

“Why doesn’t the government invest it directly and operate the LRT1 instead?” asked Reyes.
It appears that the public is subsidizing the building and operation of LRT1 but it is the private group that would operate it and profit from it, he concluded.

Bayan and many other progressive groups have been opposed to the privatization of LRT from the beginning. Now, a few days before the scheduled turn over to the LRMC which bagged the privatization contract, Abaya’s letter to Abad shows what they have been warning about. It is the first big example of public losses and private gain resulting from privatization.

“The penalty payments are the result of an onerous contract entered into by the Aquino government and the winning bidders. This is a form of sovereign guarantee that will be borne by taxpayers. The amount is scandalous and unconscionable,” said Bayan secretary general Renato M. Reyes, Jr.

Last year, the LRMC won the LRT 1 line extension contract, and the management and operations of the existing LRT 1 as well as the construction of a common terminal at Trinoma in North Edsa. On October 2, 2014, the Aquino government and the LRMC signed a 32-year contract that would allow LRMC to take over the operations of LRT 1 and at the same time build the extension of the train lines to Bacoor, Cavite. LRMC is supposed to pay the government a concession fee of P9.35 billion.


Under the contract, LRMC only needs to pay 10 percent of the total concession fee, or P935 million ($20-million) upon signing. The rest of the payments will be made starting the 5th year of the contract.

As such, against the P935 million ($20-million) paid upfront by LRMC, it is poised to collect billions already from the government’s sovereign guarantees, an amount which Bayan said the government should directly spend instead on improving LRT1 – without the private group LRMC set to profit from the train’s operations.

Reyes of Bayan said that based on Abaya’s letter to Abad, the government is also looking to pay the LRMC some P106 million ($2.3 million) to make up for the current minimum LRT fare of P11 which is below the P12.13 minimum fare agreed upon in the concession agreement. They called it “deficit payment” — if LRMC does not get its required fare hike, the government will shoulder the deficit.

In his letter, Abaya also asked for the release of P500 million ($11 million) for the government “blocked account” that will pay for future penalties to LRMC. The P106 million is just the total gap between the LRMC’s required fare and the actual fare, multiplied by the number of train riders in the last quarter of 2015. The gap or deficit will increase in the coming months, for as long as the current fares remain in force.

Apparently, Abaya also anticipated that the Philippine government will pay LRMC P1.05 billion should it lose a possible dispute regarding certain items in the contract. 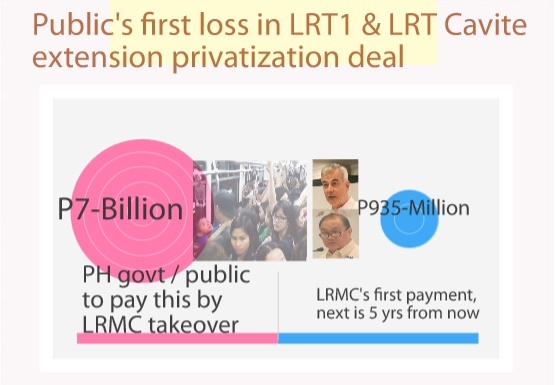 Finally, Abaya sought the release of P444 million ($9.5 million) for right-of-way acquisition that needs to be settled by the third quarter of 2015. This is in connection with the LRT expansion to Cavite.

In his letter, Abaya said the DOTC’s requested amount is to be drawn from the P30 billion “Risk Management Program Fund” which the Aquino government sought funding for in the national budget to cover its obligations to the private sector in relation to the Public Private Partnership programs and contracts. The lump-sum amount falls under the Special Purpose Funds in the national budget. “It is discretionary in nature, and therefore it is pork,” Reyes said.

He added that the tone of Abaya’s letter suggests that the decision (to release the funds) rests on Abad, showing he has an alarming power or discretion over such huge public funds.

All in all, even before the Ayala-Pangilinan tandem in LRMC takes over the operation and management of LRT1, this is how the public stands: Reyes said the investment, costs and risks are borne by the public but the gains or profits from operations and advertising are to be cornered by private concessionaire.

“Government is set to pay LRMC a total of P7.519 billion (over $160-million) in penalties and fees. In contrast, the LRMC has only paid government P935 million ($20 million) or 10 percent of its concession fees. Ginigisa tayo sa sariling mantika. (We’re being fried with our own fat.)

The private concessionaire stands to get more from this than the government. It’s already as if government is the one financing the private investors,” Reyes said.

The bad news does not end there. He warned that the privatization contract is set to last 32 years, guaranteeing LRMC a fare hike every two years.

As a solution, Reyes of Bayan suggests terminating the LRT privatization contract this early, because it is grossly disadvantageous to the public.