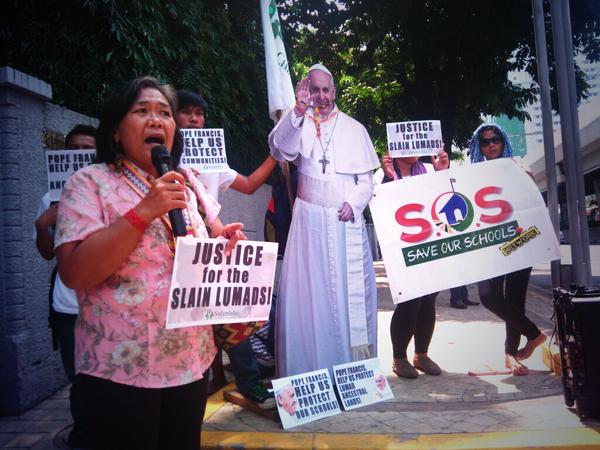 “Pope Francis, hear our misery and prolonged sufferings. Help us protect the indigenous schools, communities and people in Mindanao.”

MANILA – Indigenous peoples and child rights’ groups appealed to Pope Francis to heed the plight of thousands of Lumad children caught amidst the massive militarization of communities in Mindanao.

The Salinlahi Alliance for Children’s Concerns, along with Lumad from Mindanao under the Save Our Schools network, gathered in front of the Apostolic Nunciature in Malate, Manila on Tuesday, Sept. 22.

“With his solicitude and high regard for human rights and dignity, we are confident that Pope Francis values children, especially the frail and marginalized such as our Lumad brothers and sisters in Mindanao. They have a special place in his heart,’ said Salinlahi secretary general and Save our Schools Network lead convener Kharlo Manano. 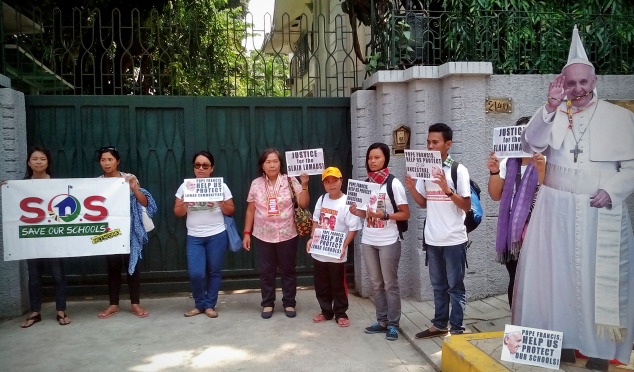 Manano said there is now a massive exodus of people threatened by state forces in Mindanao. In Surigao del Sur, nearly 3,000 individuals – half of whom are children, were forced to flee their homes after paramilitary forces Magahat-Bagani killed a Lumad educator and two leaders earlier this month.

The Lumad also offered a bead necklace, a traditional emblem for friendship and peaceful solidarity, to the Pope together with their letters of appeal.

“Pope Francis, hear our misery and prolonged sufferings. Help us protect the indigenous schools, communities and people in Mindanao. Impart us your Apostolic Blessing,” Manano said.

Text by ANNE MARXZE D. UMIL
Photo grabbed from Save Our Schools Network