You Are Here: Home → 2015 → October → 3 → Advocates call for resumption of peace talks amid Lumad crisis

Advocates call for resumption of peace talks amid Lumad crisis 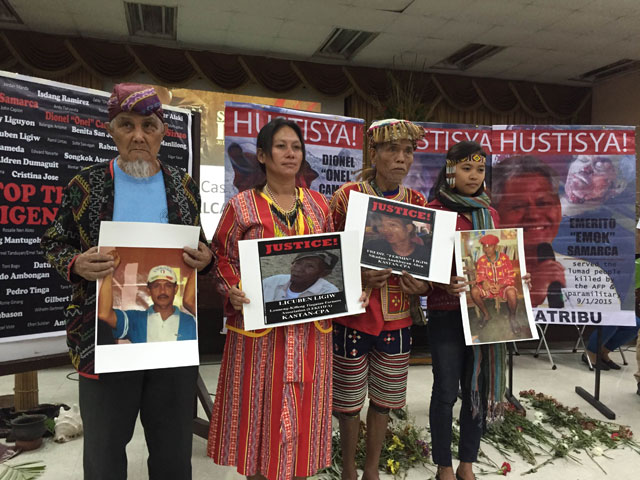 MANILA — Peace advocates, mostly from religious groups, appealed both to government and the Left to resume peace talks in the light of the Lumad killings.

Ogan said the killings and other forms of attacks on Lumad schools and communities started in 2011 with the murder of Fr. Fausto “Pops” Tentorio https://www.bulatlat.com/?s=Fr.+Pops , a staunch ally of the Lumad. The Sept. 1 massacre of Emerito Samarca, Bello Sinzo and Dionel Campos in Lianga, Surigao del Sur has brought the issue to the fore.

Ogan said 55 battalions of the Armed Forces of the Philippines are deployed in Mindanao. “There is supposed to be peace talks [between the GPH and the Moro Islamic Liberation Front], why the huge deployment of forces in Mindanao? The soldiers are not after their enemies. The AFP is a protector of investments,” Ogan told the gathering at the College of the Holy Spirit, Sept. 30.

The Lumad leader said the military has been trying to quell their resistance to the encroachment on their ancestral lands.

Ogan added that the 146 schools set up by Lumad with the help of religious groups are threatened to be closed down. “Our government does not want indigenous peoples to be educated. We know what Mining Act of 1995 is. We know how mining would destroy our environment and plunder our mineral resources,” he said.

He added the Lumad schools teach sustainable agriculture not only to the students but also to their parents. “The government does not want our lives uplifted. If we have remained miserable, we would be enticed by the deceptive tactics of mining companies,” he said.

Ogan cited how the SMI-Xstrata allegedly tried to bribe Daguil Capion with P60,000 per hectare of land. Daguil is a Blaan leader who has waged a pangayaw (armed resistance) against the Tampakan gold project in South Cotabato. Daguil’s wife and two sons were slain by alleged soldiers of the 27th Infantry Battalion on Oct. 18, 2012.

“The military is not after their enemies. The AFP serves as a protector of big business interests,” Ogan said.

Another Lumad, Glorivic Belandres, a teacher at the Tribal Filipino Program in Surigao Sur (Trifpps), said they just want to go home.

As of this writing, 3,000 Lumad who have fled their communities are staying at the Tandag City Sports Complex.

Belandres said they are also calling for the disbandment of paramilitary forces, which she said were formed by the AFP.

Imbong said it is clear that the victims on Sept. 1 massacre are civilians. “They are unarmed. Why is it that the government tags as NPA those who protect the environment, who uphold the welfare of Lumad?” Imbong said.

The NPA is the armed wing of the Communist Party of the Philippines (CPP). The military has repeatedly claimed that NPA guerrillas are operating in Lumad communities.

Imbong added that the GPH and the NDFP should go back to the negotiating table and discuss the next substantive agenda, the Comprehensive Agreement on Socio-Economic Rights (Caser).

“Both parties should address the roots of the armed conflict,” Imbong said.

For her part, Lizette Tapia-Raquel, professor at the Union Theological Seminary, called on fellow Christians “to cry out and cry with those who need God the most.”
“It is not enough to pray. We must cry out. We must resist,” Raquel said.

Raquel added, “Resistance is essential in upholding life and dignity.”

Members of the Association of Major Religious Superiors in the Philippines (AMRSP), Ecumenical Bishops Forum and Philippine Council of Evangelical Churches also expressed their solidarity with the struggle of the Lumad.