You Are Here: Home → 2015 → October → 8 → Underage Filipina domestic remains in coma in Riyadh 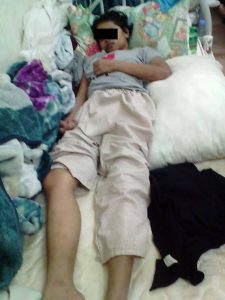 “Her appearance has improved. She is no longer pale and her lips are reddish. But she remains comatose.”

MANILA – A reported underage Filipina domestic helper in Saudi Arabia remains comatose nearly two weeks after she was brought to a welfare agency by her employer, a migrant rights group said.

“Rina,” not her real name, was brought to the Saudi Social Welfare Agency last Sept. 19 by her employer. Several days later, some concerned Filipino ward alerted Migrante Sectoral Party chapter in Saudi as her condition began to deteriorate.

Migrante Middle East coordinator John Leonard Monterona decried the abuse suffered by Rina, who reportedly told fellow patients that she is only 17, and that she was raped. Her passport showed that she was born on Feb. 16, 1990 in Kabuntalan, Maguindanao.

Francis Dungca, MSP-Riyadh spokesperson, said Rina told her fellow ward patients that “she was gagged with clay and silicon after the rape incident.” Days later, Rina could no longer stand, walk, and talk, and eventually fell into coma on Sept. 24.

On Sept. 25, Monterona said officials of the Philippine Overseas Labor Office – Overseas Workers Welfare Administration (Polo-Owwa) coordinated with the Saudi Social Welfare Agency and asked to transfer Rina to the Kingdom Hospital, where she underwent surgery after doctors found a clot in her brain.

Monterona told Bulatlat.com that members of the #SaveOFWRina campaign paid her a visit on Sept. 28 and 29. At least 12 OFWs donated blood for her and more pledged to donate if needed.

“We visited her last Saturday (Oct. 3). Her appearance has improved. She is no longer pale and her lips are reddish. But she remains in comatose,” Monterona said.

Monterona called on the Philippine government to act on Rina’s case, and on the rising cases of deployment of minor OFWs. He said Philippine Overseas Employment Agency (POEA) chairman Hans Cacdac should investigate how she was recruited and deployed abroad in spite of being underaged.

As of this writing, her family from Maguindanao is asking the Philippine government for assistance to visit Rina.