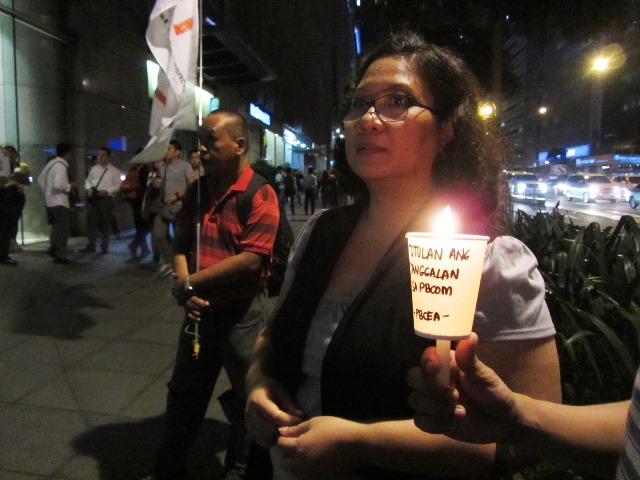 Reorganization, streamlining and productivity management initiatives would cut down on the bank’s labor costs at the expense of its long-standing employees.

MANILA — Monday is the start of workweek in most banks, but this particular Monday begins a period of uncertainty for many PBCom employees, more so to those affected by the bank’s recent layoffs. Their termination begins to take effect this week.

PBCom is implementing what it calls as reorganization, streamlining and productivity management initiatives. Under this, some employees, or their jobs, are being adjudged redundant, leading to the termination of those affected. Last year, 77 employees were reportedly told to go; this year, 44 and another seven employees were terminated.

Most of the affected employees interviewed by Bulatlat.com last Friday, Oct. 16 said they did not see it coming. They or their union were never made a party to any decision making regarding their jobs. Some of them were simply replaced by employees from other branches.

John Rainier Castillo, president of PBCom Employees Association (PBCEA), said the management had denied the planned retrenchment when the union asked them months before. The terminations were just a nasty gossip then.

But on September 18, PBCom issued a letter or memorandum to selected employees from various branches, telling them their positions were pinpointed for management productivity initiatives, and as such, while thanking them for their services, they are being told to go. They were promised separation pay as prescribed by law, one month after October 18 when their termination would have been final.

Forced retirement in another name?

A senior branch service associate or teller who has worked for PBCom in the last 25 years, received the memo on Sept. 24. He did not sign it – but he was told he would be fired all the same, whether he signed his acceptance of the memo or not.


“The letter says termination is effective by October 18, but on Sept 28, Monday, they didn’t want to let me in for work. I stayed till 5:30, but I can’t work because they denied me access,” the affected senior teller told Bulatlat.com.

The next day he again reported for work but they asked him to go.

He quoted the region head telling him, “If you want to come here, you sit on the chairs for clients.”

This time, he left the bank after a few hours.

As the sole breadwinner, he worries for his family. He has been a union shop steward for 10 years. He is now in his late 40s.

“Wala sa imahinasyon namin na aalisin kami,” (It didn’t enter our imagination that we’d be fired), the senior teller told Bulatlat.com. Others like him said the letter telling them of their termination also surprised them.

He would rather continue working in PBCom, as do the others given termination papers and who have worked there almost as long as he had.

Some of the employees terminated have worked at the bank for just a few years, but many more have worked for almost or more than two decades. 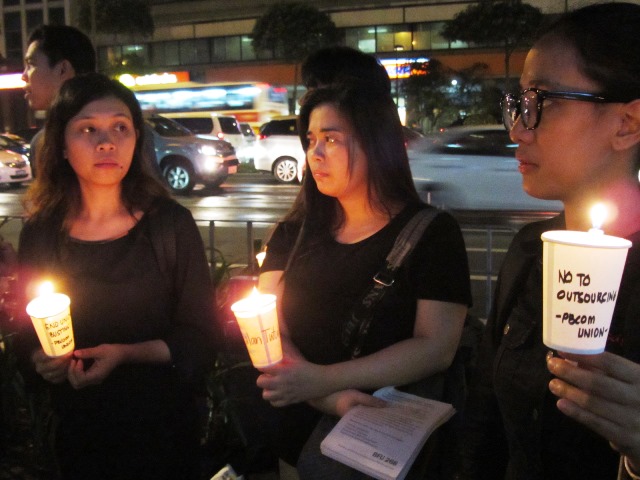 In PBCom’s Binondo branch, two senior bank tellers who were retrenched have worked there for 26 and 27 years, respectively.

“We are the two who are in service the longest (in the branch),” said a 48-year old senior bank teller. She, too, said the termination came without warning.

In Binondo, one of the three main banks of PBCom, they were suddenly told they are “redundant,” but after they were made to sign their agreement to the memo (which came with a quit claim, too), three tellers were brought in to take their place at the bank on Sept 24. Plucked from other branches, they are younger and paid lower compared to the two retrenched senior tellers.

In PBCom’s Caloocan branch, the lone terminated senior teller has worked there for nearly 22 years. She told Bulatlat.com the employees who remained in the branch are mostly newly hired, young employees, some of whom are not yet permanent on the job.

Aside from waves of mass termination, where the more senior among staff or rank-and-file bank employees are targeted for replacement by younger, lower-paid new employees, PBCom is merging some of its units and branches, according to its union leaders. As such, the retained employees are expected to shoulder additional tasks.

Last week, Castillo of the bank employees’ union said the PBCom management has been calling on employees to be “universal processors,” meaning they are to do more jobs than before.

Aside from that, Dennis Fernandez, vice president of PBCom employees’ union, said PBCom has been hiring “officers” who, unlike the usual high-ranking and highly paid bank officers, are receiving less salaries and benefits, performing jobs of rank-and-file employees, and are contractual-based.

All these would cut down on the bank’s labor costs, at the expense of its long-standing employees.

“Those deemed as not friendly to management are declared redundant,” commented one of the younger retrenched employees.

Fears of being the next on the retrenchment block grip some of the bank employees, preventing those who wanted to voice opposition to the lay-offs, or act in sympathy to co-workers praying to be rehired. 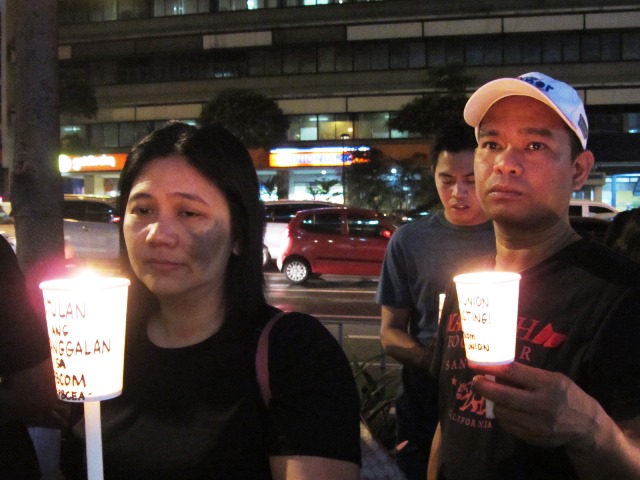 Despite fears, employees joined the union’s picket protests in PBCom’s three main branches. Last Friday, Oct 16, they held a candle-lighting ceremony in hopes to shine light on the calls of their co-employees to be given back their jobs.

Castillo told fellow employees that the retrenchment is mostly geared for the bank’s increasing profits.

None of the retrenched has so far received their mandated separation pay of one month per year of service. They still hope to be rehired, but, if PBCom will not, they worry that if they did something it dislikes, some of its executives might delay releasing their separation pay.

Newly jobless, and at their age (mostly in their forties), they are aware that looking for another job with comparative pay is a challenge. For those who have worked more than two decades in PBCom, their separation pay would amount to a little more than two years’ worth of salaries. This means they have to find another job within that time frame. Beyond that, they have no more income.

For a 42-year old employee retrenched from his documentation job in their head office in Ortigas, he hopes his 13-year work record in PBCom will serve him well in getting hired back in his old job in the bank’s armoured cars. They deliver and pick up money.

In the 13 years he had worked in PBCom, eight years were in armoured cars. He said there had never been a day he was absent on the job; and they had never lost money.

His separation pay, when it came, would amount to just a year’s income – so he just has that time frame to find another job.

He admitted to feeling low and worthless without a job, much like what he felt when he was just starting. But when on the job, he said, he gives his all, reporting to work even when not feeling well.

Challenges to union amid PBCom’s drive to increase retained profits

The retrenchment in PBCom is reducing the number of rank and file bank employees, and the unionized including its union leadership.

Castillo said that in 2013, their union P.R.O. was terminated; in 2014, their assistant treasurer; this year, their auditor, their vice-president for Mindanao, and most of the union shop stewards from different branches. These, just when they are about to renew talks for another collective bargaining agreement (CBA) in January. 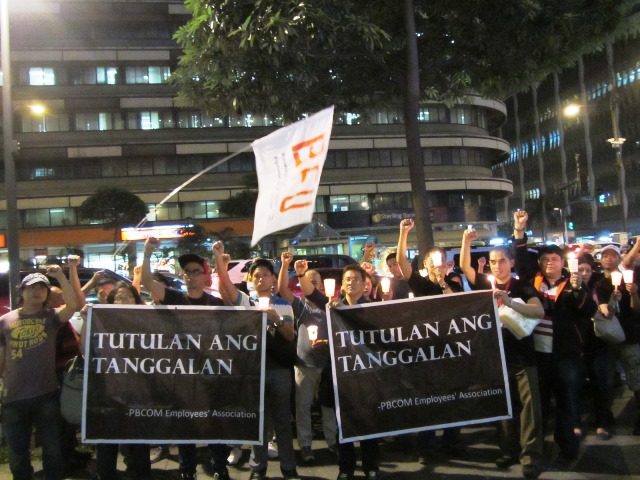 PBCom is controlled by business tycoon Lucio Co, who also owns the Puregold supermarket chain. His P.G. Holdings acquired 49.9 percent stake in the bank in 2014.

By most accounts the bank is earning money and collecting profits.

It is reporting profits, but compared to last year, PBCom’s reported net income in the first half of this year is 56 percent lower, at P83.52 million (or more than $1.8 million). The lowered profit is reportedly due to increase in its expenses.

The bank, after all, has acquired just last year the Rural Bank of Nagcarlan Inc. and Banco Dipolog Inc. Reports ascribe much of the increase in its expenses not to labor costs but on the increase in taxes and licenses and to depreciation and amortization costs.