“We cannot turn a blind eye for our members who are being eased out of their jobs one by one by the management just to save on costs in the name of profit.”

MANILA – Bank employees in the Lucio Co-owned PBCom spent their lunch hour on Thursday October 8 holding a picket protest in front of their main branch at the posh Ayala Avenue, Makati. Employees also went out to protest at the bank’s branch in Binondo, Manila and in Ortigas, Mandaluyong. They are opposing a series of terminations affecting tenured employees of the bank.

“We find no reason for why PBCom Management is terminating employees, much so those who are tenured,” said John Rainier Castillo, president of PBCom Employees Association (PBCEA). Asked what the bank management was telling them by way of explanation for the termination, he said the bank management is giving them “artificial and illogical reasons that are, in fact, just sugar-coating for their real intention — to bust the employees’ union.”

PBCom (Philippine Bank of Communications) is one of the largest and oldest commercial banks in the Philippines, with over 80 branches nationwide. Though it has its roots in Binondo, Manila, its headquarters are now in PBCom Tower in Ayala, a skyscraper officially ranked as the tallest building in the Philippines. 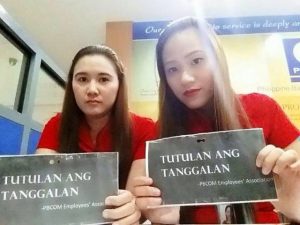 PBCom has reportedly decided that other banks in similar status employ only 1,200 or so employees, while PBCom employed 1,800 nationwide, before the start of a series of termination following a declaration that certain jobs are “redundant.”

This month, PBCom Management announced the termination of seven union members after it declared that the Credit Assessment Department (CAD) where they work is “redundant.”

Last month, PBCom terminated 44 employees, all are members of the bank employees’ union. The union has 400 rank-and-file members nationwide.

PBCOM has terminated a total of 74 regular employees since 2013. It cited its ongoing reorganization, streamlining and productivity management as reasons for the termination.

In an interview, Castillo said majority of those hit by termination work in various branches and many happen to be their union stewards. He questioned not just the basis for the termination but its timing also, considering that they are set to negotiate January next year for a new collective bargaining agreement (CBA).

The union’s auditor who handles new accounts is also one of the newly terminated employees.

The bank employees expressed that the real reason behind redundancy announcements and terminations is the bank’s drive to replace regular employees with contractuals.

Castillo said the union has monitored that the bank has been replacing the employees handling messengerial or liaison jobs with contractual employees who are paid lower wages, and denied the regular workers’ benefits and bonuses.

PBCom is also reportedly pushing its employees to do more work on the job, or to be “universal processors.”

“We cannot turn a blind eye for our members who are being eased out of their jobs one by one by the management just to save on costs in the name of profit. Management has to respect the collective bargaining agreement and our right to security of tenure,” said Dennis Fernandez, Vice-President of PBCEA.

The union is calling on PBCom management to discontinue or take back their recent announcements of termination.

In other branches of the bank, union members held placards and had their pictures taken to post their protest against termination. Castillo said they will also regularly hold “Black Friday” protests.

A day before their picket, conveners of BFU 268 (Banking and Financial Unions against BSP Circular 268 (BFU268) expressed support of the struggle of PBCom employees. BFU268 is an alliance of bank unions against outsourcing and contractualization of bank functions.

“For as long as BSP Circular 268 is not repealed and that the government remains true to its claim that Filipino workers must be the most flexible and the cheapest among workers in South-East Asia, many more regular employees will lose their functions to outsourcing agencies. We detest this,” said Josephine Celles, president of HSBC’s employees’ union.

Like PBCom, HSBC has been cutting down its workforce. Its regular rank and file posts have now considerably been diminished. From 770 regular employees and union members covered by collective bargaining agreements in 2009, its union members are now reduced to 220. HSBC’s latest outsourcing scheme was implemented this June.

Joseph Macalinao of PNB Employees Association warned that with the full entry of foreign banks in the country, termination will worsen in banks.

BFU 268 urged the bank employees to unite and take actions with them, given the threats they’re all facing now. Macalinao foresees that with bank liberalization, there would be “More outsourcing, more streamlining, meagre wage and eventually losing jobs.”

“It is imperative for us employees to fight for our livelihood”, said Louie Figueroa, Vice-President of Maybank Employees Union.