“This anti-worker scheme, implemented by the bank with the connivance of BSP, only favors employers by saving on labor cost.”

MANILA – Employees of HSBC Philippines (Hong Kong Shanghai Banking Corporation) raised the red flag against their management on Thursday, April 16, in an act which footballers and bankers usually do to call attention to a committed foul, breach of security or fraud.

The bank employees are protesting HSBC’s recent announcement that it would transfer 54 positions currently held by regular employees to its outsourcing company in Alabang. It is just the latest of such transfers, and it was announced while the union and management are crafting a new collective bargaining agreement (CBA).

From the employees’ experience with past “migration” or outsourcing of HSBC jobs, even to an HSBC sister company, the affected employees lose their job security and union membership along the way. Outsourcing of bank jobs was formally approved and detailed by the Bangko Sentral ng Pilipinas (BSP).

Protesting outsourcing and the attendant union-busting and overall slide in employees’ working condition, the members of Hongkong Bank Independent Labor Union (HBILU) were joined by unionists from other banks in raising red flags at the offices of HSBC in Bonifacio Global City, Taguig (BGC) and iHub building Alabang.

Kristel Esteban-Cabalhin, HBILU union president, said their union members have been “continuously bust” by their employer since 2009 because of the outsourcing of banking functions as approved and expanded by the BSP.

“This anti-worker scheme, implemented by the bank with the connivance of BSP, only favors employers by saving on labor cost,” Cabalhin said during their red flag protest. 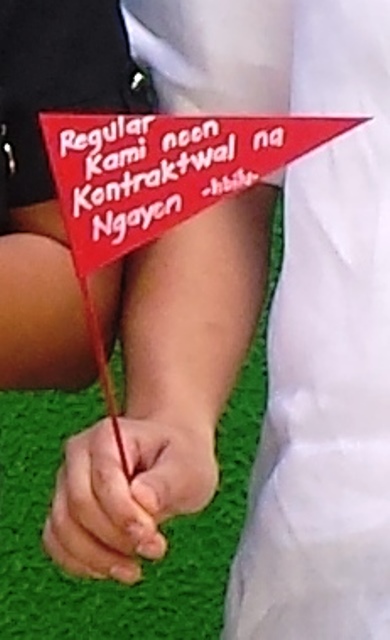 The transferred employees became like contractual employees, receiving lower pay than when they were regular and part of a union and covered by a CBA.

Regarded as the second largest bank in the world, HSBC has been doing business in the Philippines for 140 years now. Its website says it has a 15-strong branch network (including eight branches of the locally incorporated HSBC Savings Bank) in Metro Manila, Cebu and Davao.

HSBC is currently embroiled in a scandal after some leaked documents were revealed by the International Consortium of Investigative Journalists (ICIJ) pointing to a “culture of corruption” not just at HSBC but at the entire international banking system. Featured one Sunday evening on CBS News’ 60 Minutes program, the files allegedly show HSBC meticulously catered to some of the world’s biggest dictators and criminals, that it did business with a collection of international outlaws: tax dodgers, arms dealers and drug smugglers. The files also allegedly show that HSBC was a popular place for people in trouble with the law to stash their assets.

Contractualization and union-busting in banks

In the Philippines, HSBC and all other big banks have expressly been allowed to outsource jobs or functions, provided that, based on the Bangko Sentral ng Pilipinas circulars, the banks also take responsibility for the security of its data and transactions.

In 2000, the BSP issued its first circular for the outsourcing of banking functions. It revised and expanded its scope in 2005, and revised parts of it again in 2012 to ensure that the outsourcing banks are managing the attendant risks with job outsourcing.

Local bank unions have opposed the job outsourcing of banks and financial institutions, citing that it results in union-busting and worsening of job insecurity and condition of the bank employees.

Under the circulars (Nos. 268, 488 and the latest, 765), banks and non-banks (other financial institutions) are now allowed to outsource up to 60 bank and non-bank jobs.

Among these “outsourceable” jobs are some core banking functions, said Restituto Figueroa, assistant secretary at Planters Bank Development Employees Association and one of the conveners of an alliance called BFU 268 (Banking and Financial Unions Against BSP Circular 268 and related succeeding circulars).

Under the outsourcing scheme, regular and permanent positions covered by the collective bargaining agreement can be contracted out to third-party agencies. It can also be “intra-group” or implemented between a bank’s head office, another branch or related company.

Figueroa said the unionized among bank employees have “tremendously fallen in number” no thanks to the BSP outsourcing circulars. In HSBC, for example, the union members have shrunk from 770 in 2009 to just 265 in March of this year.

“Outsourcing is not beneficial to employees as it threatens their security of tenure. This is basically contractualization that the Aquino government has been encouraging all throughout his administration”, Figueroa added.

Campaigns led by the BFU268 have resulted in the holding of committee hearings in Congress. The group has also written the BSP governor, who responded with amendments in 2012 but outsourcing continues, said Figueroa.

In HSBC, the employees’ union president, Kristel Cabalhin, said outsourcing is set to decrease the union by another 54 members.

Joseph Macalinao, president of the Philippine National Bank Employees Association, said, “The implementation of outsourcing, usually, does not involve the participation of the labor union in the concept of industrial partnership. We find contractualization an abuse of management prerogative as it dwells on unfair labor practice and is anti-worker, anti-people.” The latter’s union also expressed its support to the members of Hongkong Bank Independent Labor Union saying they share the same calls against outsourcing.