‘Spare us from outsourcing’ – bank employees

MANILA – Members of an alliance called BFU 268, or Banking Financial Union Against BSP Circular 268 and its Related Succeeding Circulars, held a picket on Friday April 24 in front of Bangko Sentral ng Pilipinas (BSP) main office in Manila in defense of their regular jobs, wage, benefits and unions against outsourcing.

Mark Oliver Gonzales, president of Planters Development Bank Employees Association, one of the conveners of BFU268, said the BSP “abused its authority” when it enumerated bank functions that could be outsourced.

In December 2000, the BSP issued Circular No. 268 listing functions which it considered “not necessary and desirable for bank operations.” BSP revised and expanded its scope in 2005, and revised parts of it again in 2012, mainly to ensure the outsourcing banks are managing the attendant risks with job outsourcing.

The outsourcing of bank functions dovetails for the banking industry the labor department’s orders on “permissible” contractualization. Under the Aquino administration, that order is D.O.18-A which outlined requisites to legal contractualisation.

As a result, up to 90 functions in banks and financial institutions have now been classified as non-core functions, thereby allowing its outsourcing to third party agencies, Gonzales of BFU 268 said.

Because regular bank employees are being declared as redundant and soon terminated after their jobs are outsourced, Joseph Macalinao, PNB Employees Association president and member of BFU 268, said the bank employees have no choice but to protest.

The members of BFU 268 brought to BSP one of the most recent casse of outsourcing their 21-member banks have encountered. HSBC announced this month the “migration” of 54 job posts to HSBC Data Processing Philippines (HDPP), a third party agency. The planned job “migration” will add to the positions previously outsourced by HSBC which has caused the union to lose members. The “migrated” jobs are passed to contractual or project-based employees who are not unionized, the BFU 268 said.

Hongkong Bank Independent Labor Union in HSBC has lost two thirds of its membership in the last six years, as its headcount dropped from 770 in December 2009 to 265 as of March this year, according to the BFU 268 statement issued to media last week.

The union in HSBC feared their membership will decrease further when the announced migration of 54 jobs becomes effective this June. They protested last week by raising the red flag, a sign which calls attention to a committed foul or fraud, at the HSBC.

Aceña said there are even instances today when bank employees are being paid under the piece-rate system. 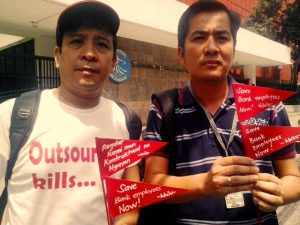 The statement issued by BFU 268 last weekend blames the redundancies and retrenchments for outsourcing schemes in the industry. It said it was only formalized in 2000 when the BSP issued circular no. 268.

The BFU 268 called on bank employees to join their campaign against contractualization and the wage diminution that accompanies it.

Citing the Labor Code, particularly Article 280, they reiterated that an employment is deemed to be regular when the employee has been engaged to perform activities which are usually necessary or desirable in the usual business or trade of the employer.

“Our rights are protected under the Philippine Constitution Article XII Sec 3: The State shall afford full protection to labor, local and overseas, organized and unorganized, and promote full employment and equality of employment opportunities for all. But in contrast to this, they said, the Aquino administration through the Department of Labor and Employment has strengthened outsourcing and contractualisation with Department Order 18-A.

“We abhor the permission to outsource given to banks by BSP. This is a red flag,” said Citibank Employees Union Vice President, Arnel Bismonte.

Similar to what the HSBC bank employees did last week, unionists from other banks grouped together in BFU 268 raised red flags as they marched toward the main office of the Bangko Sentral ng Pilipinas.