Manilakbayan thanks UP community with Narra trees 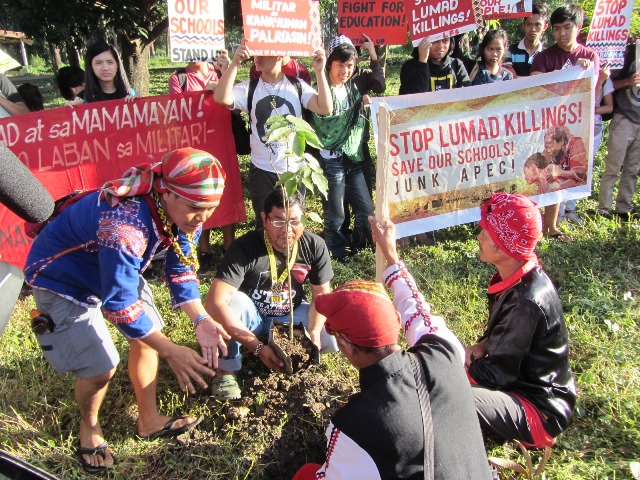 Narra is dubbed as the Philippines’ national tree. It is also indigenous in the country and noted for its superior strength, hardiness and resilience.

MANILA – Before they dismantled their kampuhang bayan (people’s camp) after a week of turning a part of UP Diliman into a day in day out cultural and political reality classes, 18 Lumád leaders datu and bai, planted seedlings of Narra tree at the open grounds leading to the university’s College of Human Kinetics.

“This is our way of saying thank you to the UP community, for having us here for a week,” said Jomorito Goaynon, or Datu Imbanwag, Kalumbay chairperson and first nominee of the Sulong Katribu partylist. The delegates of Manilakbayan camped out in the university grounds from October 26 to 31. 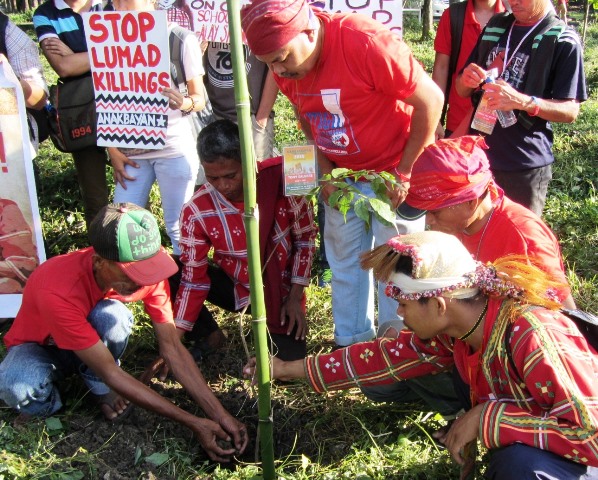 After a brief march from the Kampuhan at the grounds of UP’s College of Human Kinetics, the tribal leaders were met by members of Anakbayan at the site where Lumád datus and bais themselves cleared the soil of weeds and dug to plant the narra seedlings.

Narra is dubbed as the Philippines’ national tree. It is also indigenous in the country and noted for its superior strength, hardiness and resilience.

Aside from saying “thank you,” Lumads and Moros also reiterated their calls to stop Lumad killings and military and paramilitary-initiated attacks against the schools and indigenous communities in Mindanao.

Of the more than 70 victims of extrajudicial killings among indigenous peoples, nearly 60 were Lumád.They embarked on Manilakbayan, a caravan of protest to Manila, to bring to their calls to the capital.

Representatives of youth organizations expressed their solidarity with the “Lakbayanis.”

UP Professor Sarah Raymundo said that in fact, it is they who are grateful to the Lakbayanis for their courage, unity and hope and for sharing it with them.

Although they were made busier by the presence of the Lumád in their midst, she said it had been one of the happiest and most gratifying, as she thanked the Lumád for the discussions they had shared.

“We will miss you here,” she said.

The Lakbayanis’ camp-out will be moved to Liwasang Bonifacio in Manila where they are set to stay from November 1 to 22.