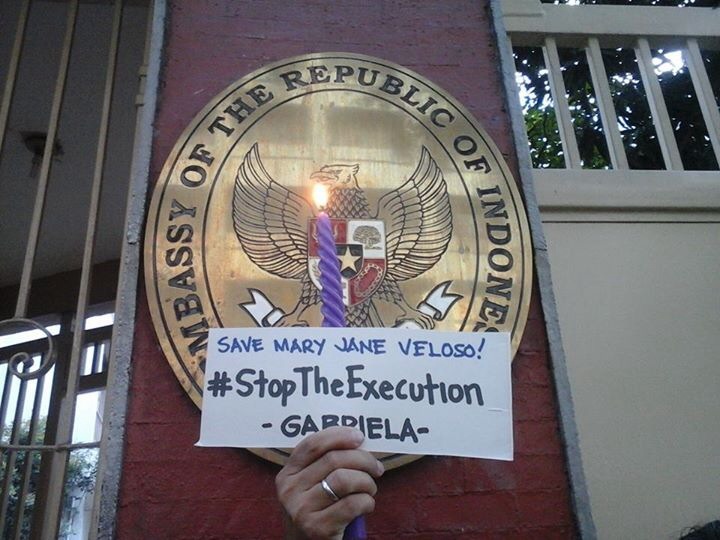 Whatever you call it — moratorium, postponement, suspension or not a priority — the net effect is that there will be no execution until further notice.”

MANILA – Mary Jane Veloso’s family rejoiced over news that ranking Indonesia official issued a pronouncement that they are not considering carrying out anymore executions.

“We are very happy because this would give the government and our lawyers to look into her (Mary Jane’s) case. But we are really asking God to give Mary Jane’s freedom as Christmas present,” Celia Veloso, Mary Jane’s mother, told Bulatlat.com.

Indonesian Politics, legal and security affairs Coordinating Minister Luhut Pandjaitan said in news reports today, Nov. 19, that executions would be put on hold as their country needs to focus on “fixing its weak economy.”

“We haven’t thought about executing a death penalty with the economic conditions like this,” Pandjaitan said in the report.

Meanwhile, the Department of Foreign Affairs said they are still verifying the information.

National Union of Peoples’ Lawyers and Mary Jane’s lawyer Edre Olalia said in a statement that if this is confirmed, it is “certainly welcome not only for Mary Jane Veloso but for all concerned.”

“We hope in time that it leads to a permanent abolition as we have serious objections and questions about its effect and purpose in deterring crime, it precludes rehabilitation and reformation and worse, may victimize innocent individuals who are wrongly convicted for different reasons or factors and brought irretrievably to the next life or world,” Olalia said.

Olalia told Bulatlat.com that this is a validation of earlier pronouncements of Indonesian Attorney General Prasetya that executions are not priority.

“But whatever you call it — moratorium, postponement, suspension or not a priority — the net effect is that there will be no execution until further notice for purported reason that they want to focus on their economy,” he added.

Mary Jane, a victim of human trafficking, was arrested and sentenced to die in Indonesia some five years ago for carrying 2.6 kilograms of heroin. Her execution was stayed at dawn of April 29 due to strong local and international outcry.