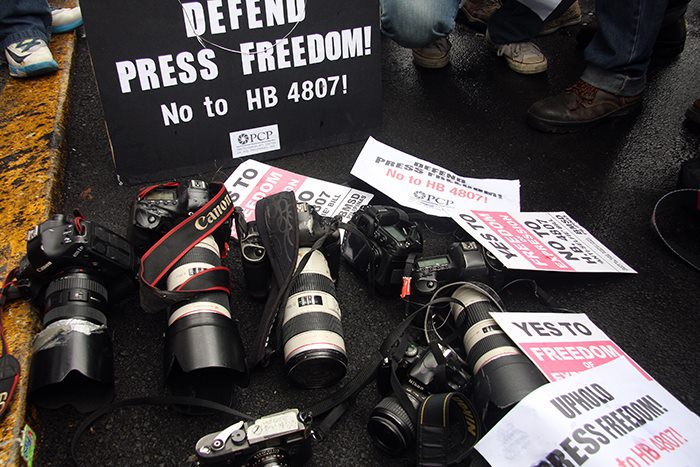 In the 2014 Impunity Index of the Committee to Protect Journalists (CPJ), the Philippines was ranked third next to Iraq and Somalia.

In his speech marking the International Human Rights Day on Dec. 10,2010, Aquino said, “Violators of human rights will be held accountable for their actions, and the state will protect, with unflagging commitment, the rights of all its citizens.”

Aquino added, “The culture of silence, injustice and impunity that once reigned is now a thing of the past.”

Or so he said.

The most recent killing of a journalist took place in Quezon City two days before the commemoration of the International Day to End Impunity on Nov. 2.

On Oct. 31, Jose Bernardo, a volunteer reporter at DwIZ, was shot dead by a lone gunman, in front of a fast food restaurant in barangay Kaligayahan, Quezon City.

If proven to be work-related, Bernardo is the 31st journalist to have been gunned down in the line of duty under the Aquino administration,according to the monitoring by the Center for Media Freedom and Responsibility (CMFR).

Besides Bernardo, three other journalists who were murdered were based in Metro Manila, something that did not happen in so many years.

Eighty percent of the victims were radio broadcasters and reporters based in the provinces.

In the 2014 Impunity Index of the Committee to Protect Journalists (CPJ), the Philippines was ranked third next to Iraq and Somalia.

The CPJ said there is 0.527 unsolved journalist murder per million inhabitants in the Philippines.

Those who were not literally silenced were slapped with libel charges.

According to CMFR data, there were 26 cases of libel filed against journalists in the last five years.

In the Philippines, libel is a criminal offense. This despite the strong recommendation by the United Nations Human Rights Committee (UNHRC) in October 2011 to decriminalize libel In October 2011.

In ruling on the complaint filed by radio broadcaster Alexander Adonis who was convicted of libel, the UNHRC said “the Philippine libel law is incompatible with the International Covenant on Civil and Political Rights (ICCPR), in which the Philippines is a signatory.”

Most of the libel cases stemmed from stories exposing alleged corruption and other anomalies. Sixty percent of these cases were filed by government officials.

Instead of heeding the call to decriminalize libel, the Cybercrime Law enacted in 2012 has expanded and strengthened the Philippine libel laws. The new law drastically increases the penalty for computer-related libel, with the minimum punishment raised twelve-fold, from six months to six years. The maximum punishment is doubled from six to twelve years in prison.

Other forms of attack

One hundred one other cases of attacks on journalists ranging from death threats, red baiting, physical assault, frustrated killing, among others, were monitored by CMFR.

There were nine recorded cases of frustrated killings. One of the victims, radio broadcaster Cosme Maestrado, was eventually gunned down in front of a busy shopping mall in Ozamis City, Aug. 27. Four years ago, he was able to escape death when unidentified men fired at him. He was not as lucky the second time.

In some cases, threats come repeatedly. TV news anchor and reporter Ces Drilon received death threats via text messages. Drilon told CMFR that she began receiving the threats after she wrote a story about the lawyer of the suspects in the Ampatuan massacre.

The Ampatuan massacre took place on Nov. 23, 2009 in Ampatuan town, Maguindanao claiming the lives of 58 individuals, of whom 32 were journalists. Primary suspects are members of the powerful Ampatuan clan.

Red baiting is another form of attack that has continued under Aquino.

Under the previous administration of Gloria Macapagal-Arroyo, several media organizations such as the National Union of Journalists of the Philippines (NUJP), Philippine Center for Investigative Journalism (PCIJ) and Bulatlat.com, were tagged by the military as “enemies of the
state.”

Recently, an award-winning journalist was tagged as a leftist.

In a meme posted last September on the Facebook page of Justice and Truth shall Prevail , Inday Espina-Varona of ABS-CBN online news site has been branded as an asset of the Communist Party of the Philippines (CPP), New People’s Army (NPA) and National Democratic Front of the Philippines. The meme has Espina-Varona’s photograph and a hammer and
sickle in the background.

Two months later, the military openly attacked Varona through red baiting. In a statement released to the media a few weeks ago, Col. Alexander Macario, commander of 401st Infantry Brigade, insinuated that Varona has links with NPA guerrillas.

Reacting on Varona’s post on social media regarding the burning of a Lumad school in Sibagat, Agusan del Sur, Macario said, “This brings everyone to question on where she gets information. Aside from the witnesses, the only persons who can give this information are the perpetrators. It seems that this incident is planned and orchestrated.”

The military has blamed the NPA for the incident.

Varona considers Macario’s statement a serious threat. She told Bulatlat.com she would file cases, including a writ of amparo.

No freedom of information

Seven cases were documented denying access to information and sources.

One such example is the incident on Sept. 17, 2014 when several journalists were barred from covering the Ampatuan massacre trial in Taguig City.

Despite strong lobbying from media groups and advocates, the Philippine Congress has not enacted the Freedom of Information bill.

Aquino will leave the presidency in June 2016. The culture of silence, injustice and impunity still reigns.