“Six years into his term, Aquino has only galvanized the fact that those who expose state excesses and injustices are bound to suffer behind bars or face possible death sentence in the hands of his fascist forces.”

MANILA – Various progressive groups called on the Philippine government to send US Marine Lance Corporal Joseph Pemberton to the National Bilibid Prison and release political prisoners, as they commemorated the International Day of Solidarity with Political Prisoners today, Dec. 3, in a protest in front of the Department of Justice.

Pemberton was recently convicted of homicide for the killing of Jennifer Laude last year. The Olongapo court had originally ruled that he should be sent to the National Bilibid Prison but later on issued a ruling to return him to the Joint US Military Assistance Group (Jusmag) in Camp Aguinaldo, where he has been staying since October 2014. The court gave five days for the Philippine Commission on Visiting Forces (PCVF) to submit a copy of a supposed memorandum of agreement between Philippine authorities which says convicted US troops will serve their sentence in the Jusmag facility.

The groups said that on the other hand, the Philippine government is quick to send activists charged with trumped-up cases to jail.

“If any political prisoner was freed during his term, it is not because of Aquino’s policy to observe human rights – because there is none. It is because of the people’s movement to fight it out in the courts, in spite of the odds, leading to the dismissal of cases for lack of evidence,” said Ilagan.

Progressives held a caravan from the DOJ along Padre Faura towards Mendiola, to further stress their call.

Ilagan said even as Aquino enters the last six months of his presidency, “it continues to criminalize just and militant political deeds. It maintains that revolutionaries are plain criminals who deserve neither justice or humane treatment.”

On Nov. 23, police arrested Jose Nayve III, the coordinator of transport group Piston in Cavite, along with George Bruce, Romel Nuñez and Armando Matres. All four of them were in Manggahan village in General Trias when arrested and charged as those behind the explosion that damaged the cable lines of a big telecommunication company.

Police barred the victims’ families from seeing them, and were only compelled to do so upon the intervention of human rights group Karapatan. When presented, the four bore bruises. Nayve’s left shoulder was also injured.

“It is clear that to avoid embarrasment over their failed attempt to capture the real perpetrators, the Gen. Trias police randomly captured mere civilians at the immediate vicinity. And now they are applying torture to force the falsely-accused prisoners to admit the crime. They are focusing on Nayve as he is a well-known activist in the country,” Marlene Gonzales of Bayan – Cavite said.

They were subjected to inquest proceedings on Nov. 24 without the presence of their lawyer. They were charged with malicious mischief and violation of election gun ban.

In an indignation rally, members of human rights group Karapatan-Southern Tagalog released balloons in front of the Camp Bagong Diwa in Taguig City, where at least 120 political prisoners, including peace consultants of the National Democratic Front of the Philippines (NDFP) are detained.

At least 62 out of the political prisoners in the country hailed from the Southern Tagalog region. These include the country’s longest-detained political prisoner Eduardo Serrano and activist Miradel Torres, who was four months pregrant when she was arrested last year.

For Serrano, two charges against him were recently dismissed by two separate Quezon City Regional Trial Courts, which said he was wrongly accused as Rogelio Villanueva, whose name was in the arrest warrant. The court also said the prosecution failed to prove guilt beyond reasonable doubt. Still, he cannot walk free as there remains charges before two other courts.

UP professor Judy Taguiwalo, who was a political prisoner during Martial Law, expressed dismay in her Facebook post on how at least half of the seven hearings for political prisoner Maricon Montajes this year was postponed. She attended the scheduled hearing yesterday, Dec. 2, but it was postponed yet again as the prosecutor called in sick.

Maricon, now 25, was arrested five years ago. She is the only female and the second longest-detained political prisoner in Batangas Provincial Jail, said Taguiwalo.

“Six years into his term, Aquino has only galvanized the fact that those who expose state excesses and injustices are bound to suffer behind bars or face possible death sentence in the hands of his fascist forces,” Karapatan-Southern Tagalog spokesperson Diana De Chavez said. 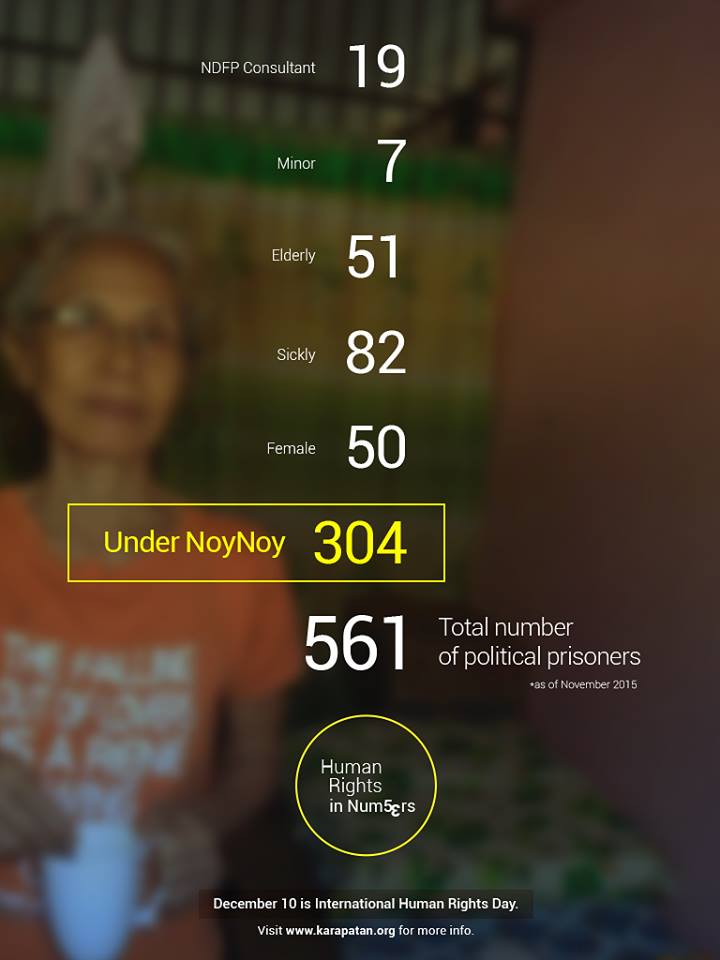 In a statement, the International League of Peoples’ Struggle-Commission 3 hailed the determination of political prisoners who have risked their lives for the defense of human rights. It also condemned the “diabolical attacks on these rights and freedoms as imperialism struggles from the fetters of its crisis.”

Commission 3 stands for the Defense of Human Rights at the Collective and Individual Levels in the Civil, Political, Economic, Social and Cultural Fields.

“Across the globe, anti-terror/national security laws and other legal instruments legitimate arrests and incarceration of activists, human right defenders and revolutionaries. Trumped-up criminal charges are slapped on them to hide the political nature of the violations against them. If they are put on trial, these proceedings are convoluted and lengthy,” the ILPS said.

The group added that political prisoners face torture and other cruel and inhumane treatment while in detention. This includes the use of isolation cells that is designed to break one’s spirit and force them to denounce their aspirations and political beliefs.

The ILPS said, “this current global scenario of gross violations of human rights and freedoms and the incarceration of multitude of peoples, who respond to the call of peoples against oppression and exploitation, exhort us to strengthen our solidarity and resolve to persevere in our struggle against imperialist plunder and wars that spawn a socially unjust and inhuman world.”