You Are Here: Home → 2015 → December → 8 → ‘Pablo’ survivors that Aquino talked about at COP 21 now displaced by militarization 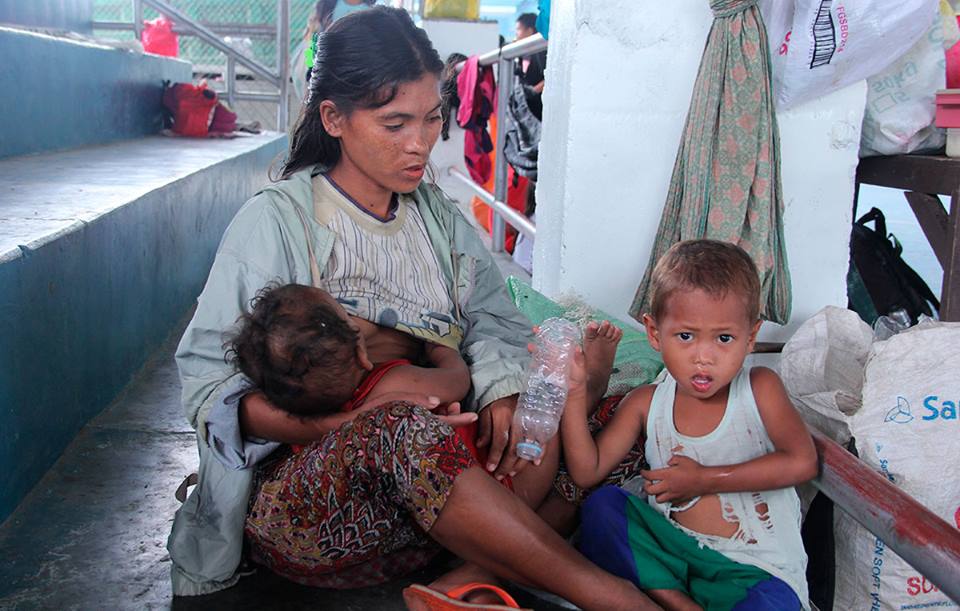 As President Benigno Simeon Aquino III talked about the devastation brought about by the 2012 typhoon Pablo (international name Bopha) before world leaders during his speech at the United Nations 21st Conference of Parties (COP 21) climate talks, around 200 survivors of the deadly storm were evacuating from the intensifying militarization of their rural communities and ancestral lands.

How cruel of Pres. Aquino that while he was pitching to COP 21 delegates the tale of his government’s so-called ‘innovations’ in response to Typhoon Pablo, its survivors were being militarized by state forces and forced to evacuate from their lands! Pablo survivors who have yet to recover from the deadly typhoon now face military operations aiming to clear the way for the entry of large-scale miner Agusan Petroleum.

In his COP 21 speech, Pres. Aquino said, “After typhoon Bopha in 2012, I had the opportunity to conduct aerial assessments of provinces where coconuts are the main source of livelihood. As far as the eye could see, not a tree was left standing. I note that it takes 5 to 7 years for a coconut tree to grow to maturity. What will the people do to survive in the meantime? We had to innovate by promoting intercropping, to ensure that communities will have other sources of livelihood to sustain our farmers until the new coconut trees reach maturity.”

Reports indicate that around 200 Lumads and other peasants, all ‘Pablo’ survivors, were now evacuees (bakwit) from the municipality of Compostela. They are now spending the anniversary of Typhoon Pablo in a makeshift refugee camp at Davao City to flee the occupation of homes by military troops last November 23.

This was the culmination of a series of human rights violations since Lumad and other peasants under the Compostela Farmers Association staged a people’s barricade against the entry of the Agusan Petroleum and Mineral Corporation (Agpet).

The Lumad of Compostela have long opposed the attempts of Agpet to explore their ancestral lands for gold, knowing full well destructive mining operations would worsen their vulnerabilities and amplify the natural hazards they face. For rejecting the threats of environmental disaster, the Aquino government gave Comvaleños the disaster of militarization.

Agusan Petroleum and Mieneral Corporation is a subsidiary of the Cojuangco-owned San Miguel Corporation, which covers 12,444 hectares in Compostela Town, are within the ancestral domains of the Mandaya and Mangwanon Lumad tribes.

Organizers of the Manilakbayan protest caravan of some 700 Lumads last month estimated that more than 40,000 indigenous people in Mindanao have been displaced to date by the interlinked problems of policies on plunder and militarization.

We call on the world leaders in COP 21 to bear witness and condemn the Aquino government’s militarization of climate-impacted communities like Compostela. It is proof that the global climate protocol under negotiation should hear the voice of climate refugees such as Filipino disaster survivors. The new climate agreement should also take decisive action against imperialist plunder and pollution as the root of the global climate, environmental, and social crises.

We also call for immediate support to the Compostela bakwits such as food, water, temporary shelter materials, and other basic necessities while they have taken refuge in Davao, as well as an immediate independent investigation into the worsening militarization of the Pablo survivors’ communities.

Leon Dulce is the campaign coordinator of the Kalikasan People’s Network for the Environment.