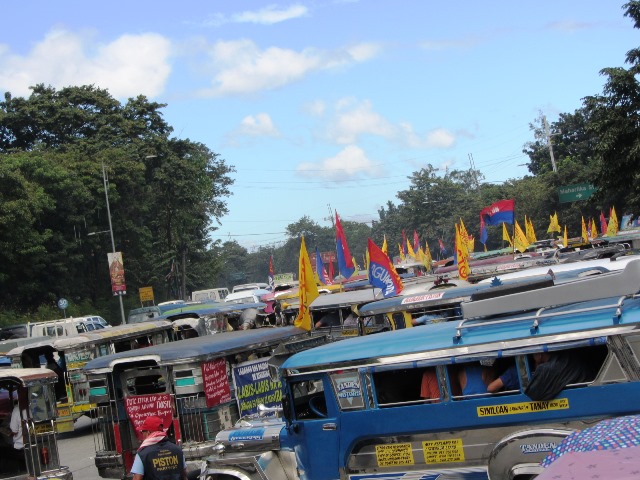 Instead of killing off small jeepney manufacturers, operators, the government could help them in acquiring new machines at friendly prices and contracts.

MANILA – At the Asia-Pacific Economic Cooperation summit held in Manila last November, President Benigno Aquino III gave some leaders a miniature décor depicting the jeepney, the vehicle assembled by ingenious Filipinos to cater to the need for short route mass transport after the war. It runs on machines salvaged out of abandoned military jeeps; it ferries commuters in a long coach modeled or fitted to the machine by Filipino tinsmiths.

Sarao Motors, one of the first, biggest jeepney assemblers, used the horse as a symbol in all its jeeps in honor of the former king of the road in this country, the calesa or horse-drawn carriage. As George San Mateo, national president of Piston, recalled, the colors and function of the calesa were soon transferred to the motor-powered jeepney.

Now, the jeepney is the target for wholesale discarding by the Aquino government. Before it bows out of Malacañang in 2016, it wants to phaseout the jeepneys, starting with those that have been registered for 15 years. If this pushes through, the jeepneys that would remain on the road will, in time, be phased out also.

To replace all of them, the Aquino government is pushing its pre-selected and approved suppliers of a finished jeepney. It wants the jeepney drivers and operators to comply, to source their replacement jeeps from the government’s chosen suppliers alone, for one, and to be taken over or placed under a corporation (under “fleet management, with GPS and other required accessories). These are the government “dictates” the jeepney operators and drivers mostly opposed.

“We can modernize our vehicles but surely, not to the point that it will have to be (thoroughly) phased out, regardless of the loss of jobs and livelihoods of those dependent on it,” Jobert Carandang, 55, driver-operator with two jeepneys from Capiz, told Bulatlat.com.

He said the government is only pushing for big business to create a new market. This, at the expense of tens of thousands of small jeepney operators who have invested long and hard for their jeepneys.

He added that all it takes to start modernizing the jeepney for cleaner air and fuel efficiency – if that were indeed what the government is after — is for the government to encourage and develop of new and better machines to replace those being used by current jeepneys.


A maker of custom-built jeepneys told Bulatlat.com that they have tried talking to vehicle makers to make new machines suited for the jeepney, but, he said, nothing has come out of such talks. He said government support in prompting that would have helped.

Unfortunately, the DOTC order as it stands now mandates the purchase instead of another jeepney altogether. As such, it seems to automatically rule out efforts of current jeepney assemblers and mechanics to be in on the design, building, testing and manufacturing or assembling of the jeepney, as had been the experience behind all jeepneys plying Philippine roads.

Before Anselmo Perweg became the spokesperson of the No To Jeepney Phaseout Coalition, for more than a decade, he was an officer of Bayyo Association Inc. (Bai), a group of jeepney operators in Metro Manila mostly comprised by Igorot tribesmen. Their work with the jeepney had trained them to become mechanics, welders, tinsmiths and, jeepney assemblers.

He told Bulatlat.com that the reason their association grew to have over 500 member-operators in Metro Manila is because of their skills in making or assembling and then maintaining their own jeepney units.

Examples of jeepneys assembled and being serviced by the Igorot of Bai include those of Dumag Motors, Lippad, Longboen, Damian and Torogi.

Perweg started with one jeepney in 1992, bought out of years of savings as an overseas Filipino worker in Saudi Arabia. Now he has three jeepneys. He is proud to say that because of their continuous maintenance and servicing, his jeepneys are “in good condition.”

Similar to Capiz jeepney operator and transport leader Jobert Carandang, Perweg believes they could replace the jeepney machine with something better and brand new, instead of totally sidelining the present jeepneys, body, chassis and all.

In a separate interview, Florencia “Leng” Francisco, 42, another jeepney operator and transport leader from Eastern Rizal, also said, “Our jeeps are being maintained as well as we can. We do what we can to make it run well, for our riders.”

She cannot comprehend why she has to be forced to dump these jeeps now and resort to loans just so she can get a stab at buying the government-approved, new jeepneys.

Given the expenses most of them incur in day-to-day maintenance, most of the jeepney operators said they could not afford the more than one million peso price tag of the DOTC-dictated jeepney.

Most also bucked the forcible placing of their jeepneys under “fleet management” by a new entity or corporation.

Don Salvaleon, 62, has been a jeepney operator for the past 32 years. He also operates Skipper Motors, maker of custom-built jeepney units based in Eastern Rizal. In the province, he knows at least five other jeepney assemblers like him.


As an operator, he ventured into custom-building jeepney units due to a desire to help fellow Filipinos wanting to have a jeepney.

Seven to eight groups of people according to their skills are responsible for making a jeep, he said. Like other small-scale establishments in the jeepney assembly business, Salvaleon employs less than 20 people, and they could produce one whole jeepney unit in about three months.

Before a spanking, colorful jeepney rolls out of their machine shop, it is worked on by the combined effort of a group of tinsmiths, mechanics, painters, electricians, artists, those in charge of buffing and polishing the stainless metal body molded for the jeepney. There are also those who work on its accessories, upholstery, among others.

Phasing out the jeepney should be voluntary, Salvaleon told Bulatlat.com.

In fact, that had apparently been the experience of most jeepney operators. They phased out their jeepneys when it cannot be improved anymore while salvaging parts that are still usable.

To “modernize” the jeepney, Salvaleon said, government support is crucial. Instead of killing off small jeepney manufacturers, operators, the government could help them in acquiring new machines at friendly prices and contracts.

Nationalist economics dictate that these machines be developed by Filipino engineers and mechanics – after all, they have successfully tinkered for decades with surplus and second-hand machines to “custom-build” the jeepney, to make it run safely in various Philippine road and traffic conditions.

Filipino mechanics and workers have been overhauling, tinkering, repairing various vehicles from tricycles to jeep, trains and airplanes. In some Bulatlat.com coverages, workers relate how they manage to keep these vehicles functioning despite government neglect. In an airline company, workers who overhaul planes have told us that the Philippine government commitments to trade agreements have forced them to stop making and repairing spare parts and instead import them. In the process, they revealed skills and knowledge at making these machines work.

“We’ve received no support from the government,” Salvaleon said about their efforts to improve the jeepneys.

Despite years of giving tribute to the jeepneys, to jeepney art, to even bringing the jeepney abroad for a photo op (for example under the FVR administration), Salvaleon is saying now that in practice, “dina-down kami,” (we’re being put down). And that it frequently also happens to them especially against any foreign rival.

But in keeping with the history of the jeepney – it is a vehicle assembled by small-scale Filipino enterprises from salvaged machines, and remodeled parts to suit local needs and condition – today’s operators would rather develop with their machine assemblers and mechanics its separate parts or components. From there, they want to achieve modernization by gaining support to local industries and manufacturing.

“It is not deferment or postponement (of phaseout) we’re asking from the government, but total junking of their phaseout scheme,” San Mateo said in a statement. In a speech in front of the offices of the DOTC last week, he vowed that drivers and operators will not be deprived of their livelihood, “just so the government can hand it over to big private corporations’ fleet management and operation of the jeepneys in Philippine public transport.”