“As long as the DOJ memorandum and the reward system remain, more innocent Moro men, most of whom are poor, will be arrested and paraded as terrorists.”

MANILA – A 20-year-old daughter of an imprisoned Moro vendor is asking incoming President Rodrigo Duterte to include her father Radjan Sahiddan and other Moro detainees in his grant of general amnesty to political prisoners as part of the new regime’s confidence-building measures for peace.

“I am appealing to him (Duterte) to free my father and the others. All the charges against him are false. I really hope that he can help us. My father is just one of the innocent people who are suffering behind bars,” Sorayda Suhali Sahiddan told Bulatlat in Filipino.

Her father Rajdan is among the hundreds of Moros who were arrested in government crackdowns and falsely accused as terrorists.

On Oct. 9, 2015, Rajdan was abducted by state security forces in a market in Zamboanga City, where he has been selling mangoes for decades. Two days later, he was able to phone his worried-sick family that he was brought to Manila to face charges, of which he had no idea.

He has been detained in Camp Bagong Diwa in Bicutan, Taguig City for almost eight months.

The basis of his arrest and subsequently, the charges against him was his supposed involvement in the kidnapping of six members of a religious group by suspected members of Abu Sayyaf Group (ASG) in 2002.

“I have never heard of the incident, until my own father was arrested for it,” Sorayda said in a phone interview. 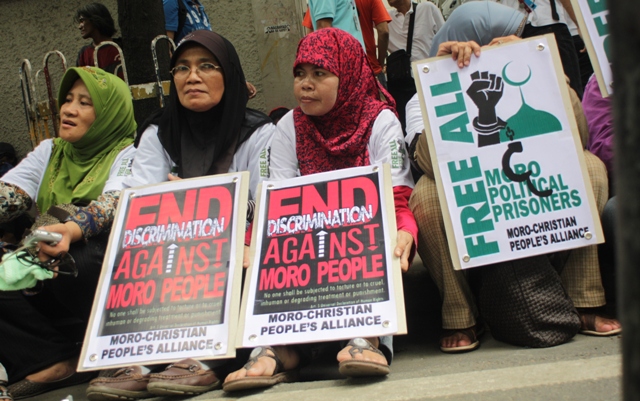 The two groups said in a joint statement that the crackdown began in 2001, following the Philippine government’s anti-terror policy and Department of Justice memorandum extending criminal liabilities to those who supposedly “fed” and “supported” local terrorists. This resulted to the arrest of at least 200 Moro men from Basilan, Sulu, Zamboanga, other parts of Mindanao, and even in Manila.

The groups said that those arrested were tortured to sign documents and false confessions that they were members of terrorist and armed groups.

“As long as the DOJ memorandum and the reward system remain, more innocent Moro men, most of whom are poor, will be arrested and paraded as terrorists,” the Moro rights groups said.

Amira Lidasan of Suara Bangsamoro told Bulatlat in a text message that the Moro people, especially those wrongfully detained and their loved ones, are also anticipating how the peace negotiations between the Philippine government (GPH) and the National Democratic Front of the Philippines (NDFP) would proceed.

When the peace talks resumed in 2004, Lidasan said the NDFP also called for the release of the so-called Basilan 73, who were arrested and accused as ASG members.

None of the cases of the detained Moros were discussed during the GPH-MILF peace negotiations under the Aquino regime.

Cases did not prosper

From the crackdown on Moro communities in 2001, 94 Moro political detainees are still awaiting court decision on whether they should be charged with kidnapping or be released for lack of evidence.

In February 2013, the Department of Justice agreed to the appeal by human rights groups to review their cases.

Suara Bangsamoro and Kawagib Moro Human Rights said the DOJ, through Senior State Prosecutor Peter Ong supported the review and even held a series of consultations with the lawyers, the Moro political prisoners and their families from May to November 2013. After these consultations, he promised to come out with his recommendation for their release.

“Two years after, Justice Secretary Leila de Lima has left the agency without any Moro prisoner released nor the case resolved,” said the Moro rights groups.

De Lima won a senate seat in the recently-concluded election.

Meanwhile, among those detained in Bicutan are 224 Moro men and women who were arrested during the government siege against the MNLF in Zamboanga City in 2013. Among them is 23-year-old Nur-Aiza Omar, a college student in Zamboanga City.

Effect on the family

Sorayda said the arrest and the continuing detention of her father gravely affected their family.
She recounted that she and her siblings looked for her father “almost everywhere” when they received news that Rajdan was taken by “armed men.” They were very surprised to learn that their father was taken to Manila and charged with a crime he never committed.

Their family is also suffering the brunt of losing their breadwinner, whom she described as a kind and generous person. Rajdan could never refuse a friend or a relative seeking help, said Sorayda.
“We are never sure when we will be able to eat our next meal until it is in front of us,” she said sadly.

Meanwhile, both Suara Bangsamoro and Kawagib Moro Human Rights urged the incoming Duterte administration to review its anti-terror policy, which has only arrested innocent people for bounty.

The release of Moro political detainees, the groups said, “will help address the historical injustice of military solution to the conflict in the Moro areas, of using discriminatory policies against the Moro people, such as equating terrorism to their identity and struggle.”