You Are Here: Home → 2016 → June → 1 → Gabriela Women’s Party thanks supporters, vows to fight for third seat in Congress

Gabriela Women’s Party thanks supporters, vows to fight for third seat in Congress 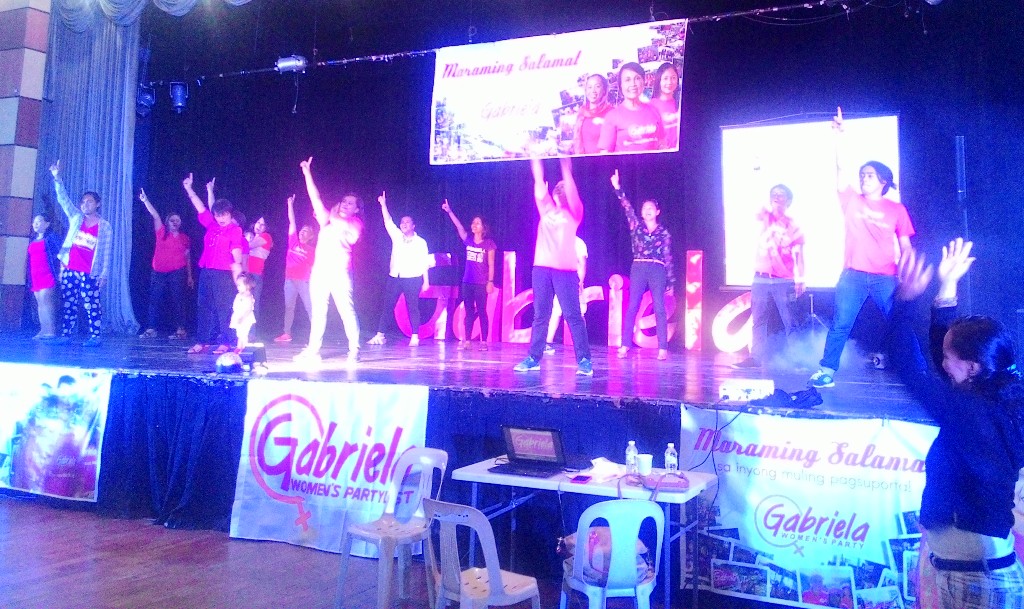 “Our victory symbolizes women who are fighting for their rights, for children and for the nation.”

MANILA — May 28th was a festive night for Gabriela Women’s Party, the sole partylist in Congress for and by women, as it celebrated its victory in the May 9 elections. The group garnered 1.3 million votes, its highest since its first electoral run in 2004.

Emmi De Jesus and Arlene Brosas, GWP’s first two nominees, pledged to continue to fight for the third representational seat as they garnered more than four percent of the necessary votes.

GWP also ranked second among the partylist groups with the highest votes, next to Ako Bicol Partylist.

De Jesus said they would push to get the third seat in Congress to make the voices of women louder and stronger in Congress, “especially the Moro women.” GWP’s third nominee, Bai Ali Indayla, is a Moro.

De Jesus said poor and marginalized Moro women need all the representation they can get in Congress, for which Indayla is best fit to do the job.

“That is why we are saying this is also a political issue, to have an additional seat, because we are serious and truthful in our advocacy,” De Jesus told Bulatlat in an interview.

In a radio interview Indayla, a Math degree holder, invoked the Carpio formula, which sets three stages for the distribution of seats for the partylist. The formula states that a partylist that gained at least two percent of the total votes cast for the party-list system shall have one seat in Congress.

The first stage gives one seat each to groups which obtained at least two percent of the total partylist votes. In the second stage, groups get additional seats, for every additional two percent they obtained of the votes. A maximum of three seats is allowed per partylist. A third stage follows until the remaining seats for partylist are filled.

De Jesus questioned the allocation of seat to partylist groups that failed to reach the required two percent votes, according to the Carpio formula.

“We know that there are some partylist that are only meant to obtain economic favors,” said De Jesus. She said percentage-wise, GWP should have a third seat.

On May 20, the group filed a motion for reconsideration and correction of manifest error and proclamation of additional seat.

“Our victory is a manifestation that we are indeed number one. This is because our chapters nationwide have persevered and sacrificed to campaign for our partylist, despite limited resources and attacks,” said Linaban during the program.

In its 15 years, GWP has pushed for the passage of laws for women’s rights and welfare, such as the Anti-Trafficking in Persons Act and the Anti-Violence Against Women and Children Act and the Magna Carta for Women. GWP also co-authored the Comprehensive Reproductive Health Bill.

As part of the Makabayan coalition, GWP also pushes for bills for national and sectoral interests, such as the Genuine Agrarian Reform Bill.

De Jesus pledged to continue to work for bills that will benefit women, alongside the ranks of organized women.

Brosas said that they will continue to fight all forms of abuse and face challenges inside and outside the Congress. “We will continue to raise awareness and give strength to women, in organizing and mobilizing. We will amplify the voice of women, children and the people,” she said.

GWP thanked their members, volunteers and their families who enthusiastically and passionately campaigned for the group.

Brosas thanked Filipinos who voted for GWP, saying that this shows the growing support and trust of the masses to the partylist. “Our victory symbolizes women who are fighting for their rights, for children and for the nation,” said Brosas.