10 years of searching for their loved ones 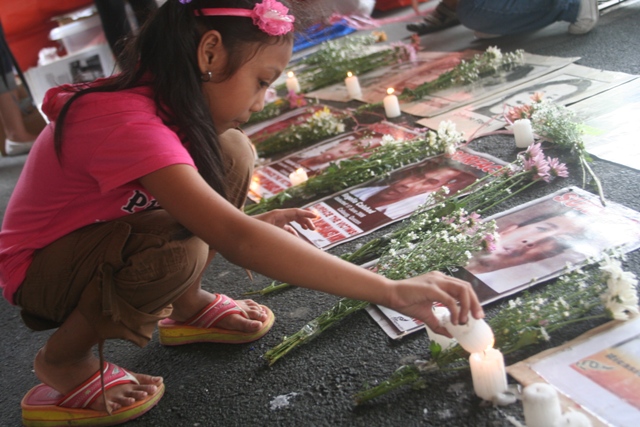 In this Bulatlat 2010 file photo, Sugar lights a candle for her father Gabriel, still missing for ten years. Sugar is now 12 years old.

On June 17, 2006, Calubad’s husband Rogelio and her son Gabriel were abducted by suspected military agents in Calauag, Quezon. They remain missing to this day.

In an instant, she was left alone to take care of her daughter Liza, then 13 years old, and granddaughter Sugar, then two years old.

“We were able to survive. Still, there are times I wish Rogelio were beside me,” Calubad told Bulatlat in Filipino, her voice breaking.

Rogelio is one of the eight NDFP consultants who have been forcibly disappeared during the reign of President Gloria Macapagal-Arroyo.

Nine days after Rogelio and Gabriel were snatched away by suspected soldiers, Ipe Soco’s mother Gloria was also abducted along with another NDFP consultant Prudencio Calubid, Celina Palma, Ariel Beloy and Antonio Lacno. Only Lacno was able to escape captivity; the rest have not been found since June 26, 2006.

Soco said he could not believe her mother has been missing for nearly 10 years. “Days and months have passed but still, I feel I’m stuck,” Soco told Bulatlat.

Both Calubad and Soco filed habeas corpus petitions before the courts. For two years, they attended hearings. Their petitions were eventually dismissed due to “lack of evidence.”

Soco said those two years felt like torture for the families.

“Habeas corpus is a petition to produce the missing persons. It’s a matter of life and death but our courts were so slow,” Soco said.

Calubad had to leave her hometown for security reasons and went to Quezon City to search for her husband and her son. She, who used to till a small patch of land in the province, barely had something to eat. “For months, we were only eating kangkong,” she told Bulatlat in an interview.

To feed her daughter and granddaughter, Calubad collected recyclable plastic materials to sell to the local junk shop. “If not for the children, I would’ve given up. They have nobody else,” she said.

Eventually, she sold her land in the province and used the money to relocate to Antipolo, Rizal. She bought a piece of land and renovated an old, dilapidated house. She managed to put up a sari-sari (retail) store and accept bed spacers so they would have income.

Meanwhile, Soco was left alone in the shanty he and her mother built in a relocation site in Valenzuela. His father is working in Cebu and his older sister has a family of her own.

Days after her mother left, Soco said he would wait for the distinct sound of the GI sheet, which served as their door, being moved aside.

The sound was never heard. The silence of many nights that followed would drive him to tears.

Soco found solace in the company of other relatives of victims of enforced disappearances. He and Calubad met at the office of human rights group Karapatan while searching for their loved ones.

Calubad would also join many of the activities of Desaparecidos, an organization of relatives of victims of enforced disappearances.

“When I miss Mama, I turn to the mothers of the disappeared. I now belong to a big family,” Soco said.

To this day, their hope of finding their loved ones has never waned.

“We long to see him, whether he’s dead or alive,” Calubad said.