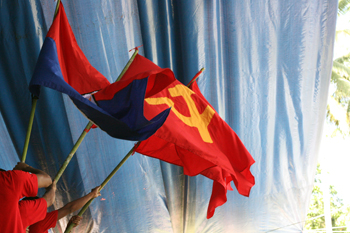 “This ceasefire declaration is encouraged by the GRP’s facilitation of the release of nearly all NDFP consultants who are set to participate in peace negotiations in the course of the next several months.”

MANILA – Following the release of 19 peace consultants of the National Democratic Front of the Philippines (NDFP), the Communist Party of the Philippines issued a seven-day unilateral ceasefire to bolster the resumption of formal talks in Oslo this coming week.

The CPP’s Central Committee and the National Operational Command of the New People’s Army (NPA) announced that the ceasefire will take effect starting 12:01 a.m. of August 21 and will last until 11:59 p.m. of August 27.

“This ceasefire declaration is encouraged by the GRP’s facilitation of the release of nearly all NDFP consultants who are set to participate in peace negotiations in the course of the next several months,” said the CPP and NPA.

The CPP said it anticipates the release of the rest of the detained NDFP consultants, citing in particular Eduardo Sarmiento who was slapped with trumped-up murder charges and unjustly convicted in December 2013.

The CPP is hoping that the ceasefire declaration will be reciprocated by the Duterte administration but clarified that even without GRP reciprocation, the CPP’s unilateral ceasefire will take effect.

During the ceasefire, the NPA will maintain a high-level of alertness against enemy troop movements.
The CPP and NPA said they are open to discuss the possibility of a longer ceasefire upon completion of the release of all political prisoners.

In support of the formal talks in Oslo, Norway, the NDFP in Norrtheastern Mindanao Region (NDFP-NEMR) announced the release of five prisoners of war of the NPA in Surigao del Norte and Surigao del Sur.

Maria Malaya, NDFP-NEMR spokesperson, said the release of the five prisoners of war is in response to the appeal of the families with the facilitation of religious members of the different churches in the two provinces.

“Their release signifies the revolutionary movement’s serious intent in pursuing peace talks between the NDFP and the GRP and as a gesture of goodwill for the resumption of formal talks in Oslo, Norway on August 22, 2016,” Malaya said.

Malaya said the concerned NPA units continue to ensure the safety police officers despite the military’s combat and community operations. Malaya said the NPA adheres to Protocol II of the Geneva Conventions and International Humanitarian Law on the treatment of prisoners of war.

Earlier, the NDFP-SMR also announced the release of three policemen in the custody of NPA units in their area.