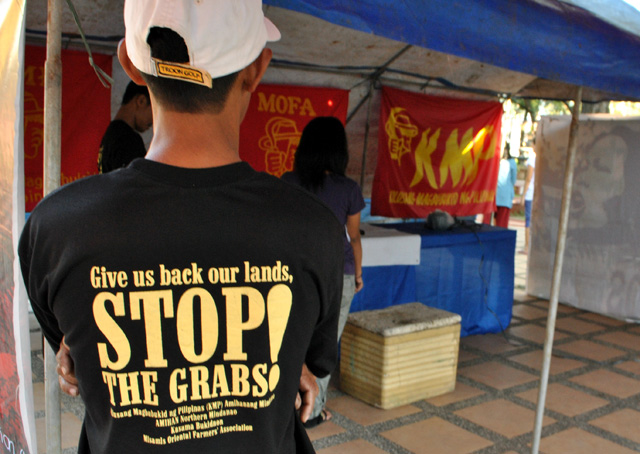 “The resumption of the peace negotiations is in the best interest of farmers and the peasant masses.”

Peasant groups and food security advocates who gathered at the Polytechnic University of the Philippines last Aug. 19, expressed high hopes that with the talks set to discuss the substantive agenda on the Comprehensive Agreement on Socio-Economic Reforms (Caser), a genuine land reform would finally be on the table.

The forum was attended by nearly a thousand PUP students.

Kilusang Magbubukid ng Pilipinas chairperson Joseph Canlas said past administrations “had no political will” and did not recognize that landlessness is “among the major root causes of the armed conflict and civil war in the Philippines.” This was why the past GRP-NDFP negotiations failed to forge the Caser, he said.

The peasant groups highlighted the dire living and working conditions of farmers, with about nine out of 10 having no land of their own to till. Many are farm workers, such as the sugar workers in Negros province who receive a beggarly pay of P500 ($11) for half a month of hard work.

“The resumption of the peace negotiations is in the best interest of farmers and the peasant masses,” Canlas said.

The forum at the PUP was spearheaded by Pagkakaisa Para sa Tunay na Repormang Agraryo (PATRIA) and the KMP.

Canlas, during the forum, said many farmers are still fighting tooth and nail for their right to till as semi-feudal conditions in the countryside continue to worsen. Farmers do not have money to buy for their own food, he quipped.

“The unrest in the country still boils down to landlessness,” he said.

Pamalakaya chairperson and former Anakpawis partylist Rep. Fernando Hicap said fisherfolk are not spared from the harsh conditions, despite the fact that the Philippines ranks third in Asia and 11th worldwide for its rich maritime resources.

“However, some one million fisherfolk are suffering, because only a powerful few are benefitting from (the resources). In this case, will we ever attain peace?” Hicap said.

Hicap said the dire living condition of fisherfolk and their families is rooted to the monopoly and control of the country’s fishing grounds by big and foreign business owners, with small fisherfolk unable to match their large fishing vessels.

For their persistent struggle for their right to till, peasants also combat human rights violations as they are being subjected to attacks from state security forces.

The landlessness is not just affecting those who earn a living from tilling the land. A recent study of the Philippine Network of Food Security Programmes Inc. (PNFSP) revealed that widespread landlessness is threatening the country’s food security.

The PNFSP, which co-sponsored the PUP forum, said with the widespread “land grabbing and subsequent land use conversion of agricultural lands, farmers who are producers of the country’s staple crops have become food insecure, are evicted from their lands, and experience dire poverty.”

From 1991 to 2012, agricultural lands have decreased from 9,854,000 down to 7,152,080 hectares. Such landlessness, the study revealed, has turned farmers from being poor to beggars. Vast agricultural lands, dedicated to food crop production, are being converted to palm oil plantations, or submerged by the construction of mega dams.

Meanwhile, laws that supposedly protect the interests of farmers, such as the Comprehensive Agrarian Reform Law (CARL) and Indigenous Peoples Rights Act (Ipra) have, instead, displaced them all the more.

Canlas welcomed the release of detained peace consultants of the NDFP who have the full trust and confidence of the Philippine peasant movement “with their vast experience and commitment in upholding the rights and welfare of the Filipino peasantry and the people.”

He said, “We continue to appeal to the Duterte administration and the GRP peace panel to show deep sincerity and determination in pursuing a just peace.”