Is change coming for the urban poor?

In a dialogue with over a thousand members of Anakpawis Partylist, NHA General Manager Marcelino P. Escalada, Jr and HUDCC Director Angelito Aguila signed unity statements pledging to work toward ending demolitions, commercialized housing and to cater to the basic needs of the urban poor, especially those in relocation sites.

MANILA – Vegetable vendor Rosalinda Angme, 42, calls a makeshift shelter of sheets of tarpaulin as her home. Her family and at least 200 other families living along Commonwealth Ave (in Quezon City) built these tarp ‘houses’ during the term of former Aquino administration.

Although they have lived in the area since 1970s, Angme’s community was demolished just before the Duterte administration took power. On the site where they used to have houses, and around it, there are ongoing or planned expansion of road widening projects, Payatas dumpsite, the building of a commercial zone including MRT-7, and construction of a power plant.

But Angme said they have nowhere else to go. Their houses were cleared away without a relocation site for them. So her family continued living in the Manggahan area of Commonwealth. Here, she earns a living by selling vegetables in the market. Her children continue to go to nearby public schools.

With others who also lost their homes to demolition, they ‘recycled’ tarpaulins typically used for ads purposes. They turned it into materials for a roof over their heads, and walls for a bit of privacy.

They use coal to cook their food. They fetch and pay for water to bathe and clean up. They pay for the use of toilets in the Commonwealth market.

Last Monday, September 5, Angme did not sell vegetables. With other fellow Muslim women in her tarpaulin community, she joined Anakpawis Partylist and Kadamay (Kalipunang Damayan ng Mahihirap) in a protest action. They rallied in front of the National Housing Authority headquarters in Quezon City. Then they entered the agency premises to hold a dialogue with officials of the government’s housing agencies.


Their demands: at the least, make the Duterte administration’s vow to hold no-demolition-without-relocation a reality; see to it that decent jobs and social services are available in relocation sites. These, in turn, mean demanding the scrapping of the Urban Development and Housing Act (UDHA), the law that, they said, has been repeatedly used as legal excuse for violent demolitions, without livable alternative.

Angme’s family and their tarp housing community remain fair game for demolition any time. As such, they remain needful of an assurance that they will not be “swept away just like trash,” only to be brought to dangerous, expensive relocation sites where death by hunger or by being in a dangerous relocation site await.

A tarpaulin for a roof may not be the coziest living arrangement to have at the peak of summer or typhoons. But as consolation Angme’s group of women pointed to their being near sources of livelihood and a public school for their children.

What they need, as the other protesters also keep saying, are decent housing in safe areas where there are jobs, public schools and public hospitals.

Unfortunately, when the urban poor are subjected to demolition, they recount how the government simply treats and views them like trash. They are denounced as eyesores, vilified as the causes of flooding, as hindrance to infrastructure-building. But from the struggles they shared during their gatherings, they are just trying to survive.

Toward this, they have joined organizations and are trying to bring proposals on how the urban poor problem can be addressed.

From their experience, government responses are not just inadequate or deplorable or violent. These do not really address the problems of urban poor communities.

Relocatees from different sites swear their neighbors go back to where they were before they were demolished. Either that, or they go to other urban poor communities.

At the program they held in front of the NHA last Monday, a ‘relocatee’ in Pandi, Bulacan for example, reiterated their need for jobs.


“We need jobs, which is why we come back (to urban poor settlements),” said Melinda Doctor, leader of relocatees in one of the Towerville sites in San Jose Del Monte.

Doctor urged the officials in charge of housing and urban poor to treat the urban poor issue as not just a matter of demolition but a matter of addressing the people’s needs to survive through having jobs and livelihood.

“When people no longer have something to eat, eventually they will leave their relocation houses and go back to being squatters,” said Doctor.

When that happens, the urban poor problem persists, and demolitions happen again and again. This vicious cycle is what the Anakpawis Partylist, Kadamay and Alyansa Kontra Demolisyon said they seek to stop in seeking the scrapping of UDHA.

The Anakpawis Partylist and Kadamay members from the urban poor also scored how oftentimes, the excuse being cited for demolishing communities are just lies meant to cover up how corporations and developers are just coveting the areas occupied by ‘informal settlers.’

In fact, they brought to the NHA fact sheets of urban poor communities targeted for demolition which include some relocation sites. An example is the more than 1,650 units of Katuparan relocation site in Manila. Kadamay’s Carlito Badion said the site is being coveted by private developers such as the Home Guaranty Corporation.

Putting an end to ‘commercialized and corrupt’ relocation

Most of the urban poor have insecure, low-paying jobs. Yet, most of the relocation being offered to them come with price tags too steep for them to sustain.

Melinda Doctor told Bulatlat that at the start they were made to pay just P200 amortization per month for their relocation home. But it turned out this was just an inducement to make them leave or self-demolish their homes.

In due time, the amortization increases, she said. Worse, joblessness in or near the relocation site means some of them eventually are forced to give up their house and forfeit whatever they have paid before.

The government funded projects meant to train the urban poor for jobs. But even here, Doctor said, they do not receive all the expected (and recorded) livelihood trainings and accompanying giveaways.

“Livelihood assistance gets stolen and as such it no longer trickled down to the urban poor,” Doctor told Bulatlat. She herself experienced it when, in a supposed livelihood training, the participants’ attendance was just called, but the training did not happen.

In training on how to give a foot spa, Doctor’s attendance was taken, but no teaching actually occurred.

In a training to handle a welding machine, Doctor said, some of the welding machines were claimed either by the housing agencies’ employees or those it tasked to implement the training. 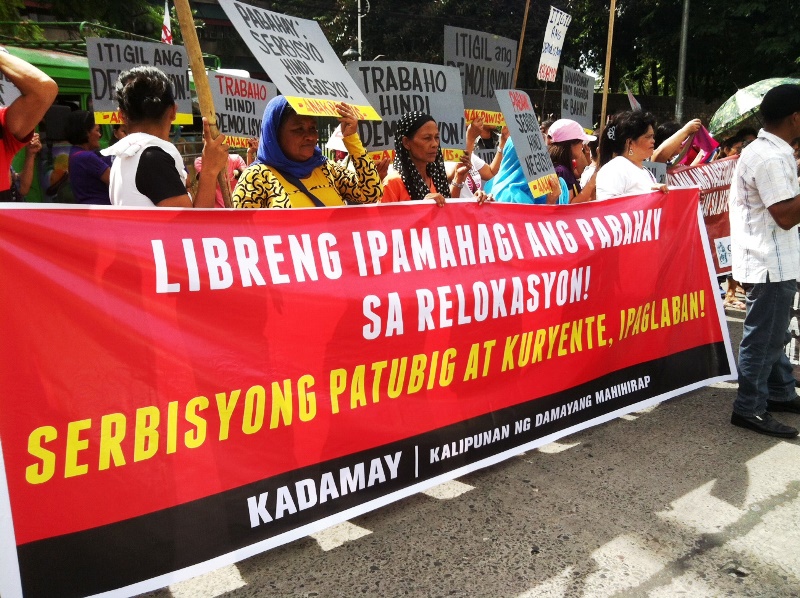 She said even if all those recorded by the government to have availed of their training managed to learn a skill, Doctor said they have few customers for foot spa, manicure or pedicure, or aircon mechanic, in their far off relocation sites. She thinks that steady jobs would come if there were establishments directly hiring them to make something.

Concrete actions on no demolition without relocation

In a dialogue with over a thousand members of Anakpawis Partylist, NHA General Manager Marcelino P. Escalada, Jr and Housing and Urban Development Coordinating Council (HUDCC) Director Angelito Aguila both signed unity statements pledging to work toward ending demolitions, commercialized housing and to cater to the basic needs of the urban poor, especially those in relocation sites.


Escalada said that within a year or two they can make things happen. Carlito Badion, Secretary General of Kadamay, vowed “we will wait with vigilance.”

Badion said that this covenant is a good step but all of them would be watching for possible actions taken by the agencies toward ending demolitions. “We will hold them accountable for any and all operations that will unjustly evict the people from their homes.”