MANILA – Some 400 members of indigenous people’s groups from Northern Luzon trooped to Makati for a series of picket protests on their first morning in the capital this Thursday, October 13.
With many of them in their traditional attire, they recounted their situation which they said the mining and energy companies have pushed to perilous points. They chanted their calls at the entrances to the headquarters of mining and energy companies operating in or near their ancestral domain. They interspersed these with their traditional music and dance.

Also, across the entrances of buildings where Lepanto and Oceania Gold hold offices, they unrolled yellow police tape or crime scene tape.


At Lepanto, they even threw samples of mine tailings which they scraped off the Lepanto Mines’ lone active tailings pond in Benguet. If you can dish it out, take some of it, they seemed to say. But the building security guards hastily brought down their steel shutters to deflect the mine tailings.

Citing Amianan Salakniban (Defend the North), the indigenous people came with posters forming the words “Stop the Plunder,” and placards shaped like their tribal shields.

Kalikasan Peoples’ Network for the Environment said the indigenous groups aimed their protests against big businesses that continue to encroach into their lands, often harming their sources of life and livelihood, their very culture and the environment.

Clemente Bautista, national coordinator of Kalikasan-PNE, said these companies exemplify the destructive and plundeorus nature of corporations. Recently, Environment Secretary Gina Lopez recommended some of these for suspension.


Bautista, however, said these companies’ track record of causing pollution and harm against people and the environment deserves no less than permanent closure.

IP march in Makati despite police effort to block them

Makati policemen, traffic enforcers and building security guards tried to stop the indigenous people’s protest action, but the latter persisted. They alternately marched and rode with their caravan to go to offices of mining and energy companies, all located in Makati City.
They succeeded at holding their program in front of Lepanto Consolidated Mining in Paseo de Roxas, and in front of Oceania Gold Mining in Legazpi Village.

In Ayala, the police barred them from taking the street toward the building housing the offices of Chevron. The latter’s geothermal project entered since 2008 the municipality of Pasil in Kalinga without getting the required free, prior and informed consent (FPIC) of the legitimate tribe leaders. The Cordillera People’s Alliance said the National Commission of Indigenous Peoples (NCIP) facilitated the granting of a fake FPIC. 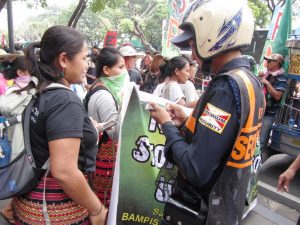 While Chevron has been entering and working a geothermal plant in their town without the indigenous people’s consent, their delegates from Cordillera were barred from even crossing the street to get to the entrance of the building of Chevron offices in Ayala. This forced the indigenous protesters to hold their program behind the said building instead.

After that they proceeded as a caravan to Bonifacio Global City. But the police blocked their vehicles at 32nd Street, forcing the indigenous people, including elders, to get off their vehicles and march to the entrance of NAC (Nickel Asia Corp) Tower housing the SN Aboitiz offices. It is in the process of building a 350-megawatt Alimit Hydroelectric Power Complex affecting parts and communities of the municipalities of Lagawe, Lamut, Mayaoyao and Aguinaldo in Ifugao. But according to indigenous protesters with Lakbayan, the company has been violating the process of securing free, prior and informed consent.

Hoping to put an end to destructive mining, energy projects

“Get off our land! Don’t force your dam on us!” was the recurring message delivered by tribe leaders and members at the entrance to SN Aboitiz office.

“We don’t want our water to be siphoned off by your dam. Your construction is detrimental to our rights,” said Rebecca Bumahit, an Ifugao.

In front of all the energy and mining companies where the northern indigenous people held a picket, their elders, youth, farmers and women, decried similar damages being inflicted on their lands, on their main livelihood of farming.

They said their farmlands have been shrinking due to siltation caused by mining. Their water sources are either becoming toxic, or else being diverted away from their lands.

Some, like those living in Mankayan, Benguet, had been forced to leave their communities as the ground has been sinking and rendered unstable after Lepanto’s eight decades of mining, said Lilian Falyao of Save Mankayan Movement. The indigenous people in Benguet had noticed unstability in the ground as early as 1972. But it was in 1999 when large swathes of land started sinking, taking with it houses and people. There have been recorded ground sinking in Mankayan and Bakun.

“Aside from stealing our resources, you have been trampling on our rights,” said Celia Bahag, barangay councilor from Bayombong, Nueva Vizcaya, in a speech outside the office-building of Oceania Gold.

Around her, fellow IPs agreed that mining companies such as Oceania Gold should be stopped for good.

They called on the DENR and President Rodrigo Duterte to indeed put a stop to the operations of these mining and energy companies. They also urged for the scrapping of the Mining Act of 1995, the law which they repeatedly blame for these companies’ destructive mining and energy projects.