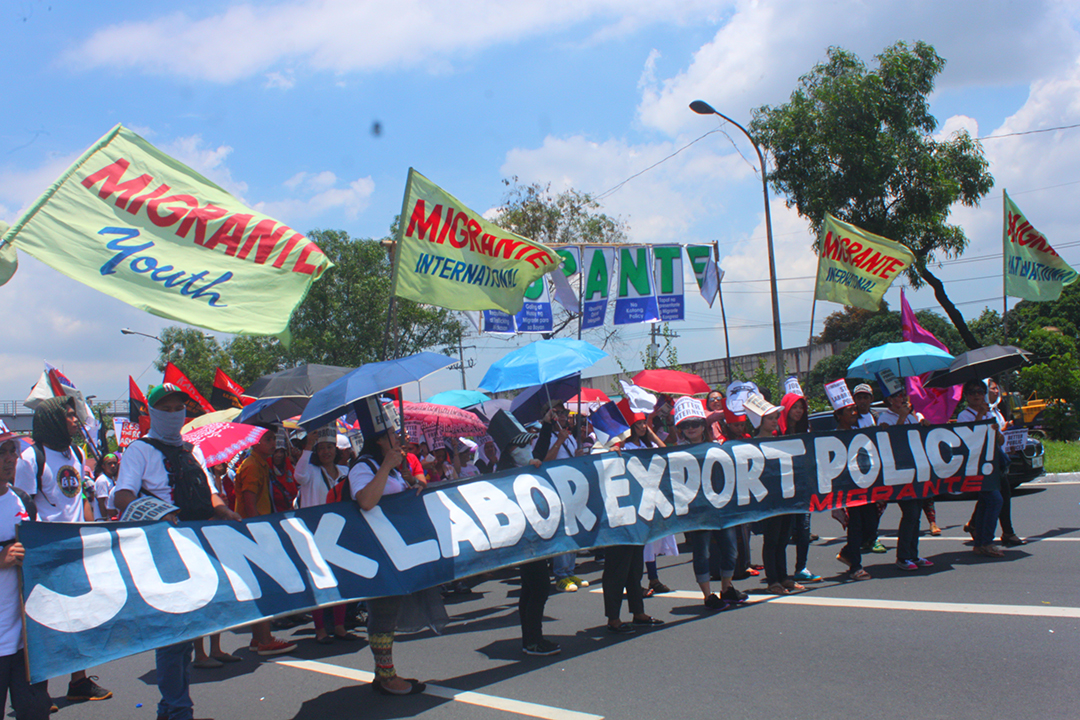 The women’s partylist hoped that with President Duterte’s statement, no woman will have the same fate as Irma Jotojot.

MANILA – Irma Edloy Jotojot was an OFW who died under mysterious circumstances in a hospital in Saudi Arabia. Up to now her case remains unsolved.
Gabriela Women’s Partylist expressed support for President Rodrigo Duterte on his statement to end labor migration and improve the country’s economy to provide more jobs.

Duterte made this statement in front of the Filipino community during his state visit in Japan this week. In his speech, Duterte said the current generation of overseas Filipino workers (OFWs) will be the last, as he promised to provide more work in the Philippines so that the next generation will not have to work abroad.

The GWP expressed its support as it joined the Justice for Irma Movement which was launched on Oct. 26, Wednesday. Justice for Irma Movement is an alliance formed by Migrante International composed of OFW victims of abuse, illegal recruitment, and their families , as well as different cause-oriented groups that vow to hold accountable the government and illegal recruiters victimizing OFWs.

“Women share the dream of having a local economy that is strong enough to support our labor force, creating an environment where it will not be necessary for women to leave their children and families to eke out a living,” said GWP said Rep. Emmi De Jesus.

Irma Edloy Jotojot was recruited by Rejoice Employment International Corporation to work as a domestic helper in Riyadh, Saudi Arabia but landed work in Jeddah. Migrante International said Jotojot died after her employer visited while she was confined in the hospital. She reportedly had bruises all over her body and was bleeding profusely.

Based on the fact sheet by Migrante, Jotojot, a mother of two, was recruited by a staff of Rejoice International Corporation in Valenzuela City. Jotojot, who was then working as a helper grabbed the opportunity to work abroad and immediately provided papers for her employment.

It was only on the day she left for Saudi Arabia on July 30, that she got a copy of her contract. It was stated in her contract that she would be deployed in Riyadh, but when Jotojot called her husband the next day, she said she was in Jeddah.

On Aug. 12, her sister Marietta got a call from an unknown number telling her to communicate with Rejoice Agency. The caller said that her sister was in the hospital for two days already, could not speak, and with contusions all over her body and bleeding profusely.

In the next days, Marietta went to the Rejoice Agency to inquire about her sister’s case but she was ignored. She sought help from Labor Secretary Silvester Bello and reported her sister’s case to the Department of Foreign Affairs.

On Aug. 19, the same unknown caller told Marietta that her sister passed away on Aug. 18, after she was visited by her employer.

Migrante said Jotojot’s medical records stated that she died of “unknown natural causes.” It was on Oct. 2 when Jotojot’s remains arrived.

According to Migrante, Rejoice Agency has a record of disregarding OFWs security and welfare, as well as recruitment and contract violations. Based on their records, at least 20 cases of OFWs from July 2015 up to the present were victimized by their foreign employer; all were recruited by the Rejoice Agency.

In 2015, Rejoice Agency was also one of the 11 recruitment agencies that were charged by the Philippine Overseas Employment Administration for violating recruitment laws.

Mic Catuira, Migrante deputy secretary general, slammed the POEA for not swiftly sanctioning the recruitment agency after learning about Jotojot’s fate. Catuira said Rejoice was only placed under “preventive suspension” by the POEA on Aug. 26. The agency was still able to deploy 22 OFWs from the period of Jotojot’s hospitalization until its suspension.

De Jesus urged the government to “take proactive measures to ensure the safety and protection of the rights of our Filipino workers abroad by holding accountable the persons and entities responsible for the abuses committed against them, as well as government officials who failed to protect and give the necessary assistance to them.”

The GWP has filed House Resolution 462, directing the Committee On Overseas Workers Affairs to conduct an inquiry, on the death of Jotojot with “a view to strengthen laws for the promotion and protection of the rights and welfare of Overseas Filipino Workers.”

Migrante said at least 6,000 Filipinos leave the country each day to work abroad. Research institution Center for Women’s Resources cited POEA’s 2014 Survey on Overseas Filipinos, which revealed that approximately 1.17 million women were working abroad. Most of them were found in Saudi Arabia (19%), United Arab Emirates (18%), Hong Kong (9%), Singapore (8.7%), and Kuwait (8%).

De Jesus said Jotojot is only one of the many cases of OFWs dying overseas under mysterious circumstances.

“We have long been aware of migrant women’s vulnerability to abuse and we hope that we will soon see an end to abuse cases such as that of Irma Jotojot and other Filipino migrants who have died under very suspicious circumstances abroad,” De Jesus said.