No moving on for kin of Ampatuan Massacre victims

“It’s been seven years that we have been dreaming of justice,” Arlene told journalists and press freedom advocates. “We hope you will not forget what happened to our loved ones.”

MANILA — For the first time, Arlene Lupugan and Erlyn Umpad went to the site where their loved ones were killed.

“It’s painful,” Arlene said of their visit last Nov. 20. She said that it was her brother who retrieved Lindo’s body after the carnage on Nov. 23, 2009 in barangay Salman, Ampatuan town, Maguindanao.

Like Arlene, Erlyn also took seven years to muster enough strength to go to the place where McDelbert Arriola of UNTV, the father of her son, had fallen.

“It’s been seven years that we have been dreaming of justice,” Arlene told journalists and press freedom advocates. “We hope you will not forget what happened to our loved ones.”

Seven years after the massacre, no one has been convicted yet for the murder of 58 individuals, of whom 32 were journalists. According to a media briefer issued by the Supreme Court , the special court handling the case heard 232 witnesses. The bail petition filed by one of the primary suspect Andal “Unsay” Ampatuan Jr. has yet to be resolved. The defense is now in the stage of presenting evidence.

Melanie Pinlac of the Center for Media Freedom and Responsibility (CMFR) said that despite the creation of a special court, the trial drags on due to legal technicalities.

The CMFR is closely monitoring the progress of the Ampatuan Massacre trial.

Dabet Castaneda-Panelo, secretary general of the National Union of Journalists of the Philippines (NUJP), said, “It’s a sin to forget, especially during these times that the powerful are revising our history.”

Panelo is referring to the hasty burial of the late dictator Ferdinand Marcos at the Libingan ng mga Bayani.

Panelo said there should be a conviction in the Ampatuan Massacre trial. She said that if no one would be held accountable, the primary suspects — members of the Ampatuan clan — might also end up being buried at the heroes’ cemetery. 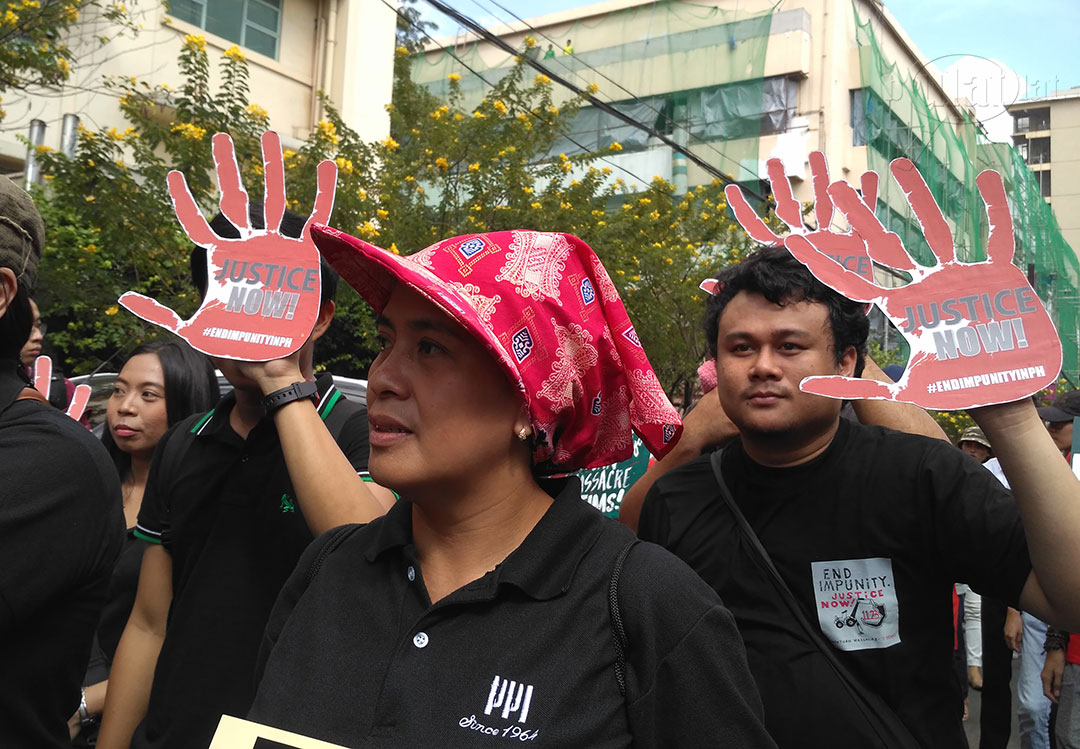 Journalism professor Danilo Arao condemned the culture of impunity that has allowed media killings. Arao noted that the Philippines ranked fourth in the 2016 Global Impunity Index of the Committee to Protect Journalists.

In a pooled editorial, Altermidya, a national network of alternative media outfits, said the “climate of unaccountability continues to embolden perpetrators to continue committing atrocious violations against Filipinos.”

Altermidya fears that the appointment of former Ampatuan counsel Salvador Panelo as one of Duterte’s top officials make the struggle for justice even more difficult. The network said that even as Duterte recently created a presidential task force to investigate media killings, there are no assurances that there would be a safe environment for media workers soon.

Student journalists under the banner of the College Editors Guild of the Philippines (CEGP) took turns in condemning the continuing injustice for the victims of media killings.

Jose Mari Callueng, CEGP national president, said that the campus press is not spared from violations to press freedom.

Karen Ann Macalalad, editor in chief the Philippine Collegian, said they have to borrow money to cover some of their expenses.

Moreover, the editors and staff of the Philippine Collegian are now being required to get permit from the administration before they could stay overnight in their own office during presswork.

The CEGP documented more than 800 cases of press freedom violations.

Also present during the commemoration were representatives of the Altermidya, Center for Community Journalism and Development and the Philippine Press Institute.