You Are Here: Home → 2016 → December → 1 → On Duterte’s promise to end contractualization, workers, youth see no development 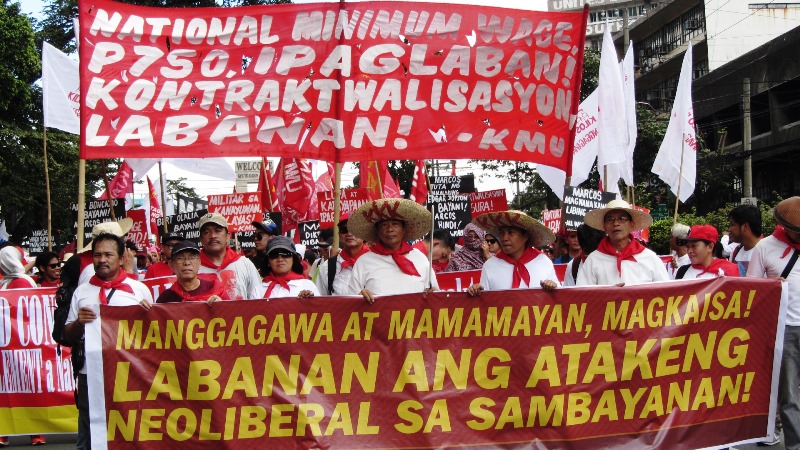 “The policies that would likely bring the people’s desired change would begin only if Duterte scrapped the neoliberal policies adopted by his predecessors and now by his economic team.”

MANILA – “No change has come yet. Instead, what happened was worse with the rehabilitation of the Marcoses.” At the Bonifacio Day commemoration, Bayan Muna Partylist Rep. Carlos Isagani Zarate described this way the status of ordinary Filipinos’ hoped-for change under the Duterte administration.

Rehabilitating the Marcoses is not moving forward but backward, and that is worse than having no change at all, Zarate said during his Bonifacio Day speech at Welcome Rotonda.

The workers ‘ group and other progressive organizations held their annual Bonifacio Day commemoration with a rally that began in Welcome Rotonda and concluded at Mendiola.

The Bonifacio Day rally has always been an occasion for assessing how much the Filipinos have achieved (or not) the freedoms that galvanized the Katipunan and its first Supremo. In this year’s ceremonies, the day was dubbed as a day of reckoning for promises of President Duterte that did not materialize.

The protests were aimed at the neoliberal system, which the Duterte administration maintains in full, said the various leaders of progressive peoples’ organizations.

After the October 17 Labor Summit where labor groups agreed to ban contractualization, the Labor department should already have come out with a policy decision by now, said Elmer “Bong” Labog at Mendiola.

Recalling also President Duterte’s promise to equalize the wage rates between all regions, he said this has also not happened yet.

What is worse is, instead of seeing moves toward the realization of these promises, what the workers are seeing are “maneuvers to get away from these,” said Labog. He cited the misnamed “win-win” proposals to tackle contractualization as drafted by employers’ groups and the government.


Both the KMU and other labor organizations have agreed that this so-called win-win will not really end or ban the practice of contractualization.

“Is Bello serious at ending contractualization? What is clear is that until now, nothing is happening yet,” Labog said.

“How will you end contractualization? That’s what the foreign investors want, that’s what the locators in economic enclaves want,” Labog said.

Similar to the Aquino administration, the Duterte administration’s 10-point program for the economy included reliance on foreign investments.

Anakbayan leader Vencer Crisostomo said the president seems to have forgotten his promise to end contractualization. Youth unemployment is frequently higher than rates reported for other age ranges in the country. Crisostomo’s group is concerned that after the difficult struggle of millions of families to send their children to school, they would have no jobs, or only contractual, low-paying jobs when they graduate.

The chairman of public sector unions COURAGE, Ferdie Gaite, said the policies that would likely bring the people’s desired change would begin only if Duterte scrapped the neoliberal policies adopted by his predecessors and now by his economic team.