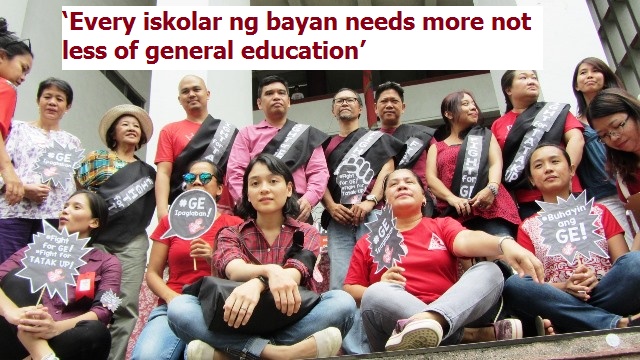 MANILA – A debate over the number of subjects in General Education (GE) that every iskolar ng bayan should be required to study is reportedly dividing the students and faculty of the country’s premier state university.

Some progressive professors and student leaders in the University of the Philippines (UP) in Diliman expressed hopes last Tuesday, March 28, that last week’s decision of the University Council to slash it to a minimum of 21 units would still be reversed in the upcoming Board of Regents meeting next week.

“How low can you go?” – they said it was the question which the University Council wrestled with on March 20, before it voted to lower the required GE units from 45 to 21. It went lower than the 36 GE units prescribed by CHED (Commission on Higher Education), making the Diliman campus’ GE the lowest among all the University of the Philippines campuses nationwide. It also ran counter to the findings of the ad hoc committee commissioned by last year’s University Council meeting.

The decision was propelled by the country’s education’s shift to K-12, which is also being protested by student organizations and teachers nationwide.

Authorities said all these shifts in education are geared to produce more “globally competitive” graduates, to address the so-called education mismatch – to cater to the needs of the labor market.

But that is precisely what the protesters of these “educational reforms” are saying the Philippines should not be focusing its educational system and economy on.

At the root of the UP students’ and professor’s struggle to hold on to the iskolar ng bayan’s expected well-rounded training is their effort to maintain its orientation toward producing graduates in service of the Filipino people, and not for increasing corporate profits.

Instead of the current economic thrust of giving huge corporations liberal access to businesses and resources in the Philippines for their maximum profit, the student and teachers organizations are pushing for an economic thrust that would develop the country for the benefit of its citizens. It would require implementation of genuine agrarian reform and national industrialization, and in campuses and schools, what they call as scientific, genuine nationalist education.

“If we’re to specialize in, say, engineering or sciences, we’d want to ground it on what the country needs to develop the economy,” said Bryan Leaño, an engineering student and one of the leaders of Stand-UP. He explained that their knowledge and skills are crucial for pushing for large-scale production of various goods that truly cater to and sustain the needs of the Filipino people.

Ben Te, also an engineering student from Stand UP, said the move to reduce GE in UP Diliman will only serve the purpose of remolding UP students for work in the service of foreign and big corporations.

“We’re just being retooled to become cheap labor,” he said, adding that a sad consequence of it is the ongoing division among colleges, students, and faculty in UP. That division (induced by competition), in fact, also lies at the core of neoliberal policies, the UP professors said. The shift to K-12, the “socialized tuition fee schemes” in state universities, and the reduction in GE courses to facilitate the years of schooling and chip away at the foundation for students’ critical thinking, all these are requirements for producing skilled but cheap, docile labor.

“They want efficient robots in the workforce who wouldn’t agonize over receiving bribes at the expense of justice, doctors who wouldn’t think twice about milking their patients, engineers and scientists who would worry only about the best ways of extracting minerals from under the ground regardless of displacing the communities and destroying the forest above it,” said Professor Gerard Lanuza.

This month’s struggle to retain GE in the education of every iskolar ng bayan is neither the first nor the last in UP.

Last Tuesday’s gathering for GE was attended not just by progressive teachers and students but also of teachers in science and engineering where the proponents of slash-GE units mainly came from.

Ben Vallejo, an environmental scientist from UP Diliman’s College of Science, and head of its Science and Society Program, said that not all from the sciences are in agreement with the moves to slash general education in their required curriculum. He said the humanities and sciences have no conflict. He wondered also why some groups in UP would want to slash GE when in the more advanced countries such as in Europe, they’re not reducing but increasing their general or liberal education.


Lanuza said that even with the present required minimum of 45 units of GE, the state university has been producing graduates that serve more the interest of a few exploiters. They conceded that the general education of iskolars ng bayan could do with improvement, but certainly not by cutting it down.

In every graduation ceremonies since the 1990s, the University of the Philippines uses the sablay, a loose garment worn over the shoulder and draped across the body, adorned with symbols which the wearer publicly respects and values. With indigenous origin, it embodies the university’s nationalism.

Last Tuesday, the professors and student leaders banded together for SagipGE (rescueGE) and wore black sablay, to mourn what they call as an assault and step-by-step killing of the heart and soul of the education of a iskolar ng bayan. They called on other students and professors to join them in the rescue mission.