You Are Here: Home → 2017 → May → 15 → Kentex fire after 2 years | Still no justice, no changes in laws abetting contractualization, violations of safety standards 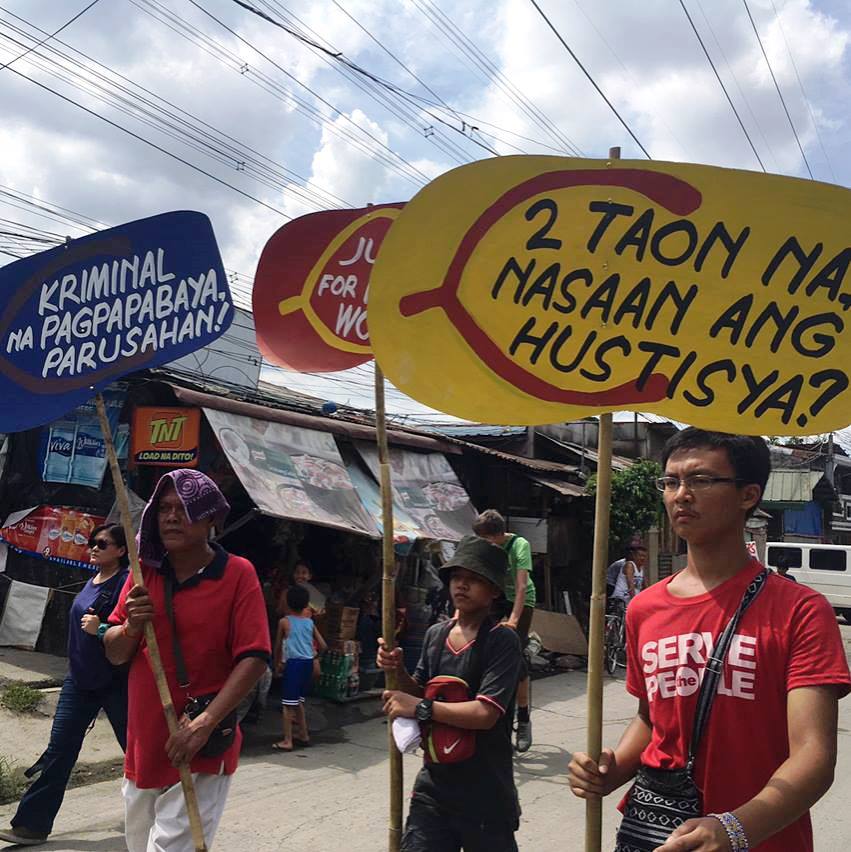 Almost coinciding with the two-year anniversary of Kentex factory fire was the 100th day since the HTI factory fire in Cavite.

MANILA – Two years ago today, the Kentex factory fire left more than 72 families grieving for their abruptly lost loved ones. They were trapped and charred in the factory building that not only had no fire exit, but also had steel grilles in every window supposedly to discourage the low-paid workers to pilfer any pair of rubber slippers from the company. Majority of Kentex workers were women working under various setups of non-regular employment, including high school graduates seeking to save money for further schooling.

During the mass and program held at the gates of the burnt factory on Saturday, May 13, the survivors and supporters denounced the absence of justice for the fire victims, their families and survivors up to now. “The owners of the slippers factory continue to escape prosecution and accountability,” said the workplace safety NGO Institute for Occupational Health and Safety Development (IOHSAD) in a statement.

Two years after the incident, civil court cases are still ongoing, said Ammied Rada, President of Justice for Workers Alliance and Area Coordinator of Kilos na Manggagawa. Rada was a contractual worker in Kentex at the time of the fire.

At the gathering, Nadia De Leon, IOHSAD advocacy officer, concluded that the country still has not learned from the Kentex factory fire, because less than two years after Kentex, evidences continue to mount that “worse, unsafe and precarious working conditions are still prevalent in sweatshops all over the country.”

In fact, almost coinciding with the two-year anniversary of Kentex factory fire was the 100th day since the HTI factory fire in Cavite. On the 100th day of HTI factory fire, the Task Force Justice to HTI workers conducted a day-long activity in the communities surrounding the HTI and in front also of the Cavite Philippine Economic Zone Authority (PEZA).

HTI or Housing Technology Industries is the biggest factory and employer in the Cavite Export Processing Zone. It burned more than 48 hours on February 2 this year. Until today, doubts persist over the official report by the company and the Cavite local government about the number of fire victims.

Rev. Eric Baldonado of Task Force Justice to HTI Workers said, in Filipino, during their program in front of Cavite PEZA, “There is a need to end this enforced silence due to threats and the seeming coverup of the truth. There is a need for a thorough probe without the intervention of the Cavite local government, Philippine Economic Zone Authority (PEZA) or the HTI.”

Many HTI workers hailed from other provinces; it had workers from as far as Lanao del Norte. Baldonado said there is a strong possibility the relatives of the missing do not know yet about what happened to them.

Majority of its workers at the time of the fire in February 2 were also contractuals or agency-hired “regular” workers. Hundreds were feared dead. But because the export processing zone was closed to the public and the media during and immediately after the fire, there were only the accounts of witnesses that due to lack of fire exits, the survivors were forced to jump from the upper floors, and crawl over unconscious bodies of believed to be dead workers at the second floor.

“Violations will be commonplace as long as business interests are valued over the lives of workers,” said Rada. He explained that this is why on top of seeking justice for the fire victims, survivors and their families, they are campaigning also for the prohibition of all forms of contractualization.

“Like the Kentex workers who died in the factory fire, contractuals are the most vulnerable to violations,” Rada said.

Workers with insecure tenure on the job, even if they have worked for years under the same employers, face a lot of hindrances in forming unions. They can’t easily voice complaints and concerns such as the lack of occupational health and safety guarantees. These are the conclusions of workers’ groups in Kentex, in HTI, in Tanduay Distillers and in many other companies with more contractual workers than regular workers.

“Strong unions are the workers’ ultimate defense against all kinds of workplace hazards such as unsafe working conditions, irregular work and low wages. Through their unions, workers can fight for safer working conditions being denied by capitalists,” said De Leon of IOHSAD.

Seeking to criminalize violation of health and safety

In the furor over Kentex factory fire, IOHSAD said the struggle of the workers and their families were crucial in the passage of House Bill 64 in Congress last December 2016. However, its counterpart in the Senate still is yet to be passed. Senate Bill 1317, or the Occupational Health and Safety Standards Act was filed last February a few weeks after the HTI factory.

The consolidated bill on occupational health and safety (OHS) disallows self-assessment as a form of labor standards inspection and imposes stiffer penalties and longer periods of imprisonment for violators of workplace safety and health.

The Senate has included the OSH bill in its priority list, bolstering hope among factory fire survivors and labor advocates that it would be passed and signed into law soon.

Meanwhile, the Task Force Justice to HTI workers is set to file a petition for Congress inquiry at the House of Representatives on May 18. Baldonado hopes the country’s representatives would welcome the push for investigation into the HTI fire and a review of laws such as the Special Economic Zone Act of 1994, which, they said, authorized the PEZA to craft policies and regulations inimical to Filipino workers.