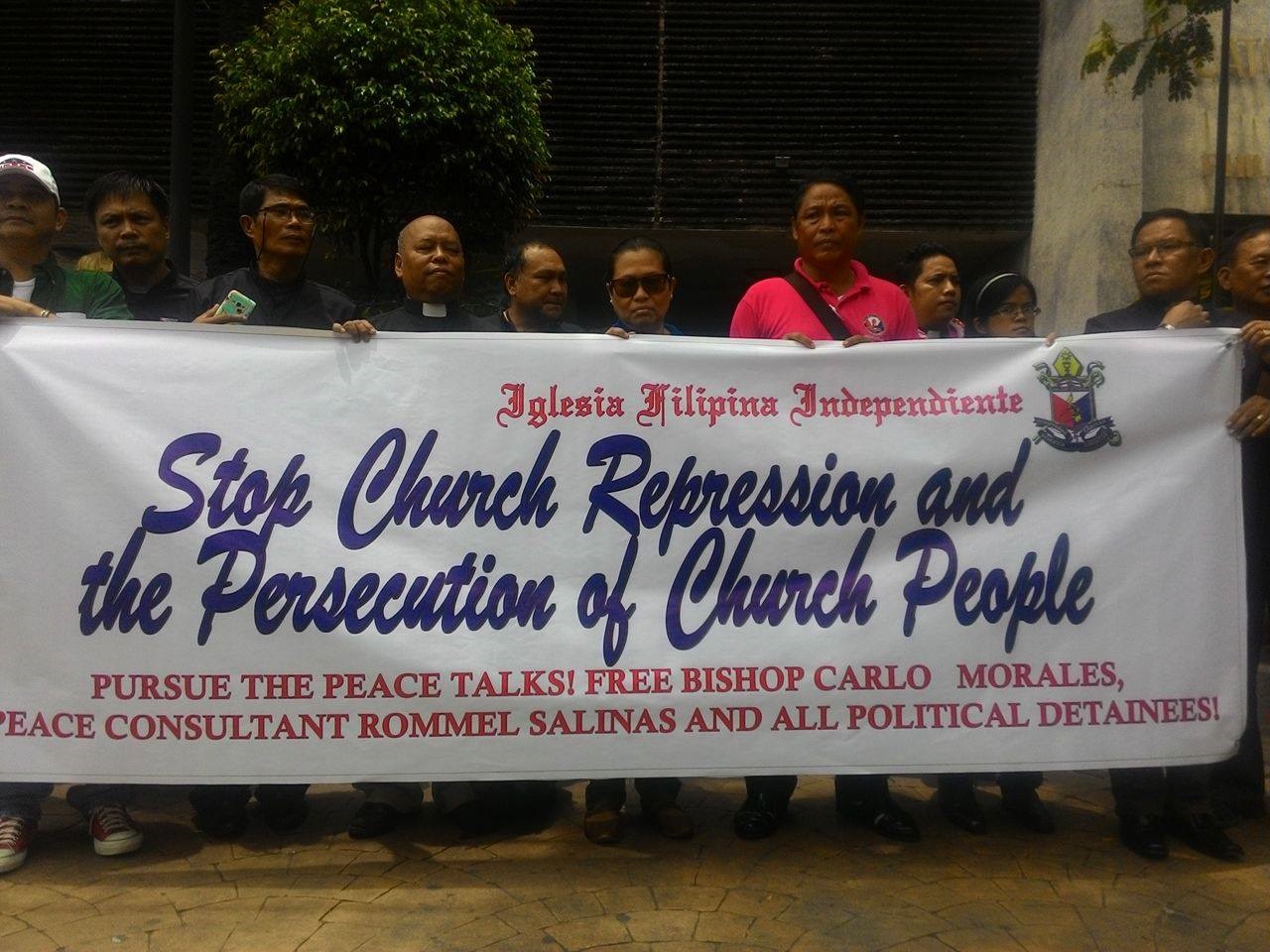 Bishop Carlo Morales of the Iglesia Filipina Independiente remains committed to the church mission of working for the attainment of peace.

MANILA – Church people and peace advocates gathered on May 23 to launch the campaign for the release of Bishop Carlo Morales, the Aglipayan leader who was arrested together with National Democratic Front of the Philippines (NDFP) consultant Rommel Salinas in Ozamis City, Misamis Occidental.

The Free Bishop Carlo Morales Movement will lead all church initiatives to strengthen their call for the immediate release of Morales, said Bishop Joel Porlares, general secretary-elect of the Iglesia Filipina Independiente (IFI).

Morales was transferred to the Ozamis City Jail from the police station according to Fr. Jonash Joyohoy, who recently visited him in detention. Joyohoy said Morales’s new detention cell may be better than the one at the police station where he was cramped with several other detainees, but the fact remains that he is still detained.

Salinas is a NDFP peace consultant protected by the Joint Agreement on Safety and Immunity Guarantees, which gives immunity from arrest to all those involved in the peace negotiations with the Philippine government. Police, however, slapped Salinas with trumped up charges together with Morales.

Joyohoy said Morales could have walked out of detention, leaving Salinas who is named in four existing warrants of arrest. But Morales chose to stay in jail in solidarity with Salinas.

He said Morales knows that the church is engaged in and supports the peace talks between the NDFP and the Government of the Republic of the Philippines (GRP). He chose to stay with Salinas because the latter plays an important role in attaining peace and social justice.

Porlares also said that Morales is resolved that he will stay with Salinas. “He has the opportunity to be free but he chose to stay,” he said during the program.

Obispo Maximo Ephraim Fahutagana also said that Morales’ morale is high. “It was inspiring to see how he had kept his high morale amidst the troubles that came his way. There, within the facility that restraints his freedom, he stood firmly, raising his clenched fist in the air in prophetic protest to state repression and harassment.”

“I saw him and talked to him, and understood how he sees his vocation being a companion of the poor among God’s people. True indeed, he is in prison for his readiness to face persecution because he values their vision for a just and peaceful world. My own faith has been strengthened by the way I have seen his steadfast commitment to the Gospel in such time of trial,” he said in a letter to bishops after his visit to Morales on May 17.

Fajutagana said demand they demand that the government drop charges against Morales release him immediately together with Salinas.

Bishop Dindo Ranojo of the Diocese of Tarlac said that since the administration of President Fidel Ramos, Aglipayan bishops have been independent observers and a third party depository in the peace talks. Among them were the late IFI Obispo Maximo Alberto Ramento and Obispo Maximo Tomas Millamena and now Bishop Felixberto Calang who is chair of the Ecumenical Bishops’ Forum.

Ranojo said church people too are not spared from different forms of harassments as they are in solidarity with the people’s struggle for land and just wages. Proof of this was the murder of Ramento, who was a staunch supporter of the Hacienda Luisita farm workers’ struggle.

Some of their members too became political prisoners like Fr. Jeremias Aquino who was arrested in 1979 and Revs. Noel and Emelyn Dacuycuy who were implicated with the killing of former priest Conrado Balweg. He said Morales was the first Bishop to be incarcerated.

But the church did not waver in their advocacy for peace and social justice for the people. “Jesus Christ is the prince of peace and the church must do what she can to attain peace. To attain and experience peace, we experience the Kingdom of God, he told Bulatlat in an interview.