Workers on 2-month strike harassed by soldiers in Mindanao

On May 27, the soldiers barged into the picket line of Shin Sun workers in ComVal. They asked the workers to pack up, go home, put an end to their strike so production at the fruit company can resume.

MANILA – As soon as Mindanao was placed under Martial Law, elements of the Philippine Army’s 66th Infantry Battalion turned up at Shin Sun Tropical Fruits company in Compostela Valley where a workers’ strike has been going on for nearly two months now. Compostela Valley is hundreds of kilometers away, nine to 11 hours’ travel by road from Marawi City where the Maute group is the official target of Martial Law. 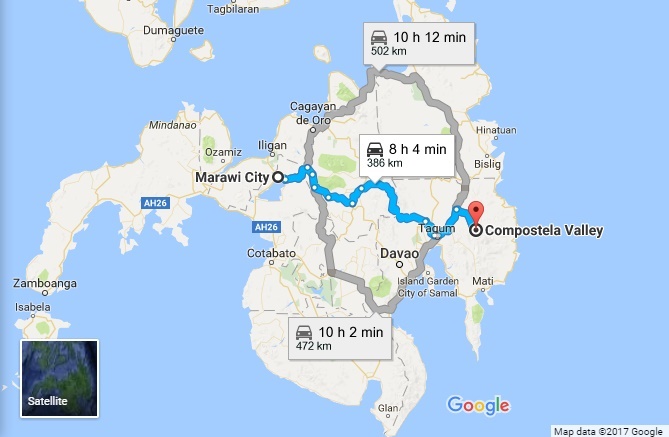 According to Danilo “Ka Daning” Ramos, secretary general of the Unyon ng mga Manggagawa sa Agrikultura (UMA), elements of the 66th IB made camp at the packing plant of Shin Sun Tropical Corp. since the evening of May 24. On May 27, the soldiers barged into the picket line of Shin Sun workers outside the plant. They asked the workers to pack up, go home, put an end to their strike so production at the fruit company can resume.

Jerome Atamosa, the spokesperson of Shin Sun Workers Union-NAFLU-KMU, told Bulatlat the soldiers even tried to convince the workers that ending the strike and vacating the picket line is good for their health. “But then the soldiers told us, also, ‘Leave now and don’t wait until we have to use force,’” Atamosa recalled.

The strikers held hands and together asked the soldiers to leave the picket line. The soldiers eventually went back inside the packing plant. Since then, defying the rule that the police and military ought to be no less than 50-meters away from a workers’ picket, the soldiers, armed with their high-powered rifles, maintained posts at the fruit plant’s gate.

According to UMA national council leaders from Mindanao, the soldiers told the workers they have orders to disperse the strike. Just before the declaration of Martial Law in Mindanao, the union members reported also of receiving death threats through text messages from persons who did not identify themselves.

“The military’s attitude against the organized masses – its default policy of brutal repression against unions and peasant groups — is now in full force under Martial Law,” Ramos of UMA observed.


Before this act of putting up a military outpost against the workers’ strike, the Philippine government soldiers have in the past figured in tailing and attacking unionists especially those allied with the Kilusang Mayo Uno.

Workers’ organizations report that non-regulars now equal or outnumber the regular workers in their member unions.

Government data estimated that a third of the employed in every establishment with 20 or more employees are non-regulars. The rate is higher among agricultural workers, where about half (49 percent) comprised the non-regular as of 2014.

The regional Labor Department found out that the fruit company is paying its workers less than the minimum wage, that it is not remitting the workers’ social insurance to SSS and Pag-ibig, and that the company and the ECQ manpower agency, which calls itself the workers’ employer, were engaged in illegal contractualization. 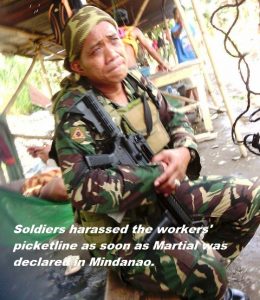 Atamosa said that after Shin Sun fired the workers who brought the Labor department’s assessment into the company’s practices, Shin Sun hired new contractuals. From 210 the workforce increased to 287.

The Shin Sun workers directly take care of the company’s plantation, harvesting its fruits, preparing it and then delivering it. Most workers have been with Shin Sun for two to 15 years now. But they are still non-regulars. As per the Labor Code, they should have been regular workers of Shin Sun if their jobs are considered necessary for its business and if they have satisfactorily worked there for six months or more.

The union welcomed the labor department’s assessment of Shin Sun’s illegal contractualization. But they did not become regular as recommended by the situation. Instead, Shin Sun “illegally terminated the contract of 81 long-time contractual banana workers, including thirty-four 34 unionized workers who demanded the labor inspection,” Ibon said in a report.

That termination order was issued without due notice to the workers, Ibon said. The management attributed the termination to “overmanning”. But as the workers said, that is not true because Shin Sun hired new contractuals through another manpower agency to replace the workers it retrenched.

As the fruit workers assert their right to picket in front of Shin Sun in ComVal, fellow workers from Metro Manila and Southern Tagalog expressed solidarity with them.

“The soldiers should have been operating in Marawi City where the Maute Group is sowing terror,” said a statement of Pamantik-KMU. It expressed support to the just strike of Shin Sun workers for regular employment.

Pamantik-KMU has numerous similar cases of contractual workers being told by the Labor Department that they should have been regular under the principal.

Similar to the strike launched by workers of Tanduay Distillers, Manila Cordage Company, Manco Synthetic, and Sorosoro Ibaba Development Corporation in Southern Tagalog, the Shin Sun strike also received a favorable ruling from the Department of Labor and Employment (DOLE).

The DOLE has also ordered Shin Sun to take back the striking workers and regularized the more than 200 workers. “But Shin Sun owner Mi Kyung Kwon instead allowed the elements of 66th IB Philippine Army to use the packing plant as a base for watching over and harassing the strikers,” said the Pamantik-KMU.

Atamosa of the striking Shin Sun workers urged Mi Kyung Kwon to heed the workers’ demands, saying their regularization and appropriate wage and benefits are not even a tenth of the plant’s profits.