People’s SONA 2017: Gone were the hopes of last year

Many protesters’ faces were set in a grim likeness, smiling-but-not-smiling, a kind of general resignation that this day, like so many others before it, might simply be another day of disappointment for all.

MANILA – “Ang init,” Kuya Mark remarked as he soldiered on through the heat with his placard held high and his head set straight.

It was around 12:45 noontime, and the many groups, communities, and individuals that had gathered thanks to the initiative of Bagong Alyansang Makabayan (Bayan) were marching along three northbound lanes of Commonwealth Avenue, Quezon City, on their way to Batasan Road to air out their grievances as close to the Batasang Pambansa complex as they could get, where President Rodrigo Duterte was set to make his second State of the Nation Address (SONA)

Some 40,000 marchers and their accoutrements – transports and supply jeepneys, vans, and the like – filled a huge chunk of Commonwealth Avenue and the whole length of Batasan Road from Sandiganbayan up to the stage set up in front of the Batasan Hills National High School.
The prevailing mood seemed to be cheerfulness, as many marchers could be seen smiling and joking with their buddies and fellow marchers.

The stifling noon heat – and later, intermittent rains – did not seem to deter the marchers and their programs any, as they used placards and tarpaulins, clothes and notebooks and anything that could be used as makeshift shade and umbrellas to shield them from the elements, all the while snickering as they did so.

“O di ba, multi-purpose ‘to,” boasted one of them, and his companions laughed.

But there seemed to be another feeling floating around, too, in the way that many protesters’ faces were set in a grim likeness, smiling-but-not-smiling, a kind of general resignation that this day, like so many others before it, might simply be another day of disappointment for all.

Kuya Mark, who was one of the members of the urban poor group Kadamay, captured the sentiment well: “Sana kasi may mangyari dito, kasi nakakasawa na.” (I hope something meaningful happens today, because all this is getting frustrating.)

‘We were let down by the government’

Many protesters, despite their general cheery mien, admitted to feeling more than disappointment at the Duterte administration.
Jocy Lopez, chairperson of Kadamay-North Triangle, said she was “angry” and felt “let down” by the Duterte government. She lamented that Duterte seemed to be only paying attention to the ongoing conflict in Marawi City, but not on the plight of urban poor communities.

Danny dela Fuente, 68, National Coordinator of Samahan ng mga Ex-Detainees Laban sa Aresto at Detensyon (Selda), said he felt somewhat disappointed because all that Duterte seemed to have done in his first year was to hasten the implementation of the Human Rights Victims Reparation and Recognition Act of 2013, of which he was a beneficiary, being a detainee during the Martial Law era of dictator Ferdinand Marcos for four years.

He also decried the continuing imprisonment of at least 392 political prisoners, some of whom are consultants of the National Democratic Front of the Philippines (NDFP) and should thus be protected by the Comprehensive Agreement on the Respect for Human Rights and International Humanitarian Law (CARHRIHL).

“Kaugnay ng karapatang pantao, bagsak pa rin siya, bagsak,” dela Fuente said. (Regarding human rights, he fails, big time.)
These feelings manifested in the groups’ burnings of effigies depicting their opposition to Duterte’s bloody war on drugs and what they saw as his increasingly fascistic side.


A group burned down a huge effigy depicting Duterte wearing military clothes and a cap with the word “Pasista” emblazoned on it while holding on to a missile they dubbed Martial Law.

One protester dressed up as the Grim Reaper, wearing a Duterte mask to show how the President seemed to be to so many Filipinos, with the thousands that had been killed under the Duterte administration war on drugs, which often seemed to target only the poor.

Later, the giant Duterte plywood effigy depicting his “leftist” and “fascist” sides were torn down by angry protesters.

What little violence happened throughout the whole afternoon came from brief scuffles between protesters from the transport sector, who were threatened with the phaseout of jeepneys, a project started by former President Noynoy Aquino and now being continued by Duterte’s officials in the Land Transportation Franchising and Regulation Board (LTFRB).


Some of these protesters – jeepney drivers themselves – hounded jeepney drivers passing by Commonwealth Avenue, throwing rocks and sandals at them, exhorting them to “fight with us, for all of us.” Some even accused the drivers of being too complicit with the whims and fancies of the government, and thus to blame for all jeepney drivers’ situation.

“Mga buwaya kayo,” screamed one protester, throwing one of his slippers at an oncoming jeepney.

“Nakaka-traffic lang kayo,” came the shouted reply of the jeepney driver as he slowed down his jeepney, honked his horn and with one hand gave the middle finger to the protester.

This was a sentiment shared by Jeffrey Cioco, 36, another jeepney driver plying the route from Binangonan, Rizal to Jose Rizal University (JRU) and nearby Ortigas Center.

Tensions flew in the air too between the marchers and a smaller gaggle of pro-Duterte groups who were holding their own “pro-Duterte rally” near Sandiganbayan building, just outside the entrance to Batasan Hills, with shouts of “Umuwi na kayo!” echoing from both sides. None of them came to blows over it.

The road is a marketplace

Residents along Batasan Road rushed out of their houses to bear witness to the protesters’ march. Many were children, and they watched spellbound as the large effigies of Duterte passed by. 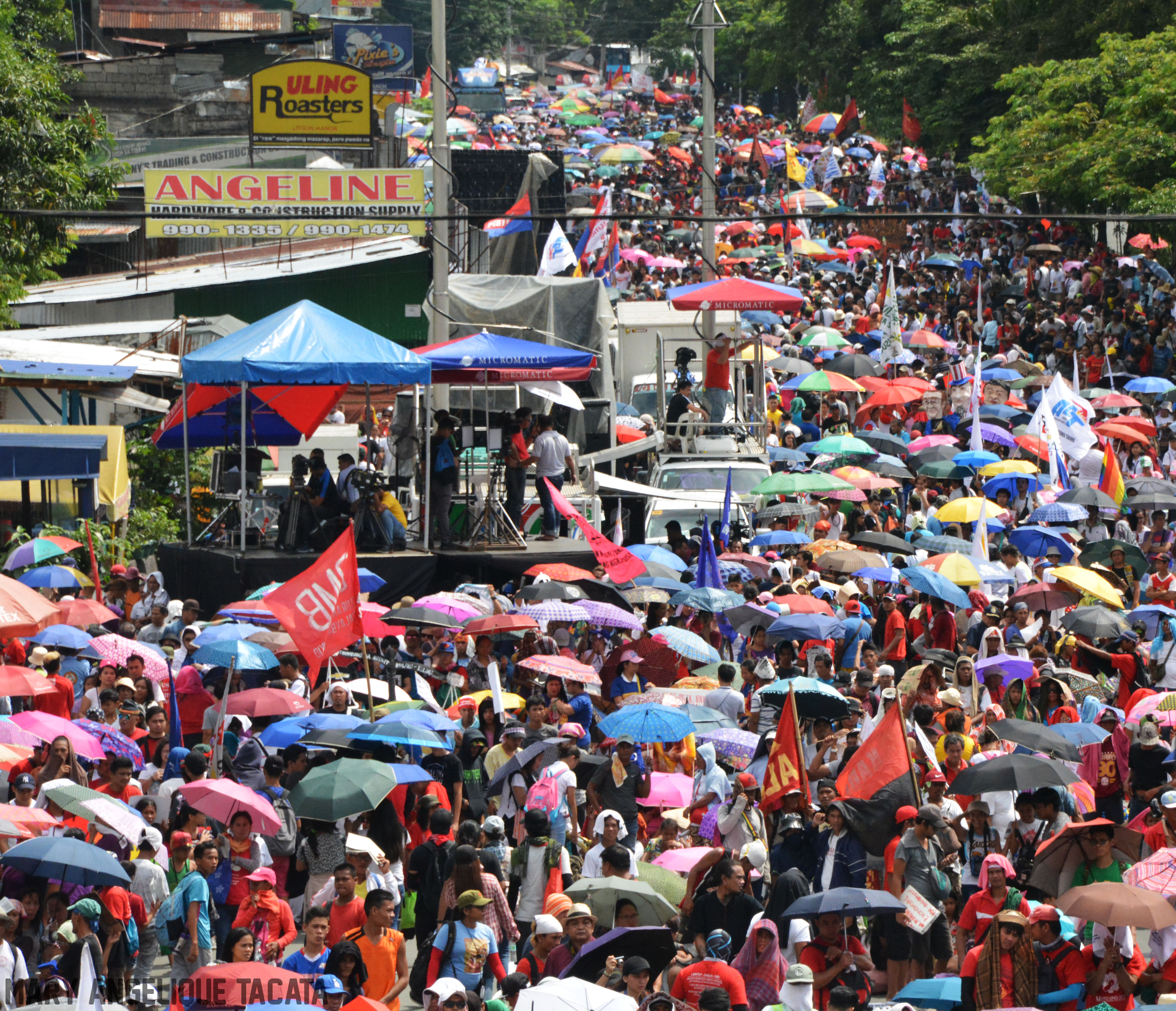 “Hala may naglalakad na Duterte o’,” one of the children, dressed in a brown shirt and red shorts, excitedly shouted upon seeing
a large effigy of Duterte cross the street.

Street vendors started popping up around Batasan, too, peddling everything from buko juice to popcorn to keychains and even clothes and hats. By the end of the day, many had probably made a killing in profits, such as ice cream vendors.

Many protesters – even during the march and after they had settled down to listen to the programs – appeared worried, and kept glancing over and over at the rows of policemen stationed along the sidewalks, standing tall and proud and, for many protesters, somewhat threatening in their crisp uniforms.

How could they not be wary? In the years before Duterte, these police personnel were the bane of their rallies, with their wooden batons and truncheons and riot shields and tear gas and fire trucks ready to hose protesters with jets of water.


But there was to be no violence between the two parties this year. The police, like in last year’s SONA, met the protesters not with weapons, but with civil, polite words and even some smiles here and there.

No ice candy-wielding policemen appeared either, though, a rough indication that police and protesters viewed each other with wary eyes.
When the protesters entered Batasan Road, the tune changed. Parts of the road thickened with police, and eventually military personnel dressed in fatigues and helmets and brandishing long-armed weapons started appearing in view.

Many protesters looked at these soldiers – posted in every floor of the school buildings on each side – with apprehension and some fear.

This, despite earlier announcements from no less than the Philippine National Police (PNP)’s chief Director Ronald “Bato” dela Rosa that there would be no weapons from government security forces in the SONA protests.

“Iba talaga ngayon, aba,” said another, with a subtle shake of her head.
Some protesters became almost confrontational, too.

“‘Kala ko ba walang baril? Mga siraulo ‘to ah,” a youth walking nearby remarked, cracking his fingers. His two friends walking beside him nodded to show their agreement.


Someone nearby shouted an expletive at a police officer standing by, who did not so much as flinch or look at the direction from where the shout came from.

It turned out that the beefed-up security was for the highest official of the land, who came out to talk to the rallyists after finishing his SONA in Congress. It was almost 7 p.m., and by that time, the heat, the rains, the long march and the whole year of frustration with unfulfilled promises had built up into the marchers a deep, surly mood that exploded when President Duterte appeared on stage:

Did the President even hear them? The press conference he held right after showed he, too, was in a surly mood. The rains poured on.