You Are Here: Home → 2017 → September → 1 → Indigenous peoples from all over the country hold Salubungan vs. Martial Law, attacks on peoples

Indigenous peoples from all over the country hold Salubungan vs. Martial Law, attacks on peoples 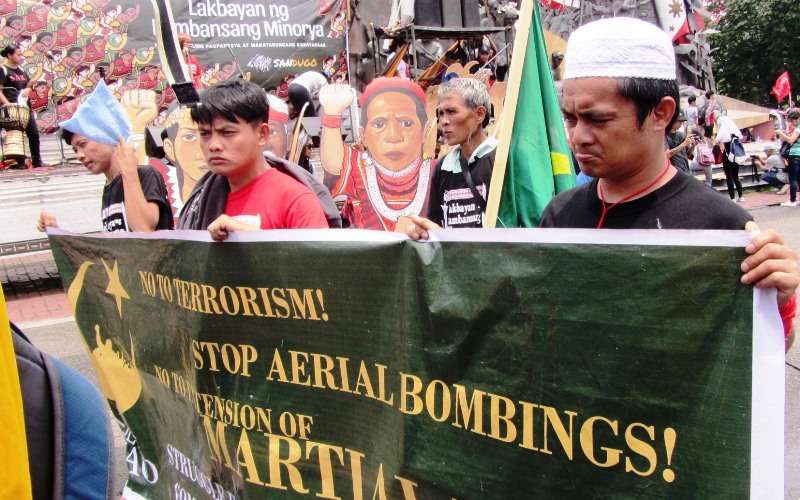 “All of Duterte’s wars are really against the people.”

MANILA – On the 100th day of the Marawi siege and martial law, Marawi survivors, Lumad, Cordillera peoples, Aetas, and national minorities from all over the country set foot in Metro Manila and met in a festive “Salubong” at the Bonifacio Shrine in Manila. With many wearing their best traditional attire, they cut a colorful picture of a motley of humanity speaking different languages but uniting under similar calls.

NCR-based people’s organizations joined them as they denounced what they described as “the US-Duterte attacks” on them and the people.

To most of the 2,500 plus Moro and indigenous peoples, the day’s “salubong” capped a nine-day journey where they braved through military checkpoints, pouring rain and blistering sun, hunger and bone-tiring movement from one place to the next, by caravan, by marching, and by boat.

Some failed to produce the martial law requirements of a “valid” ID, and were thus prevented from proceeding further. Some held days-long camp-out in various locations before getting on their way to the capital.

Their journey itself produced additional proofs why they have to bring their stories of struggle and resistance in a national Lakbayan. They reported various incidences of being waylaid, harassed, threatened on their way, discriminated against in checkpoints, kept under or threatened with surveillance and at some points even infiltrated by soldiers, “just because we are members of national minorities or bangsamoro.”

“As we were traveling to Manila, two of our kin have been killed by the Armed Forces of the Philippines,” said Jerome Succor Aba, a Moro Datu and spokesperson of Sandugo alliance of Moro and national minorities.

On August 23, a Mansaka farmer and member of Kahugpungan sa mga Mag-uuma sa Maco, Com Val (Farmers’ Federation of Maco, Com Val), Roger Timboco, was shot dead at a habal-habal terminal. He was an active supporter of the Lapanday banana plantation farmers during their land occupation campaign.

On August 27 another Lumad, Lomer Gerodia, was shot dead in Poblacion Maragusan. He was a member of a militant farmers group called Abante.

In Marawi where President Duterte and the military mainly based the declaration of martial law, the war against the alleged remnants of the Isis-inspired Maute continues to deprive the population of their homes and livelihood.

Thousands of their fellow Moro are still unaccounted for since the bombing of Marawi on May 23. Yet, the war that resulted in the daily dropping of bombs. Aba and other Moro leaders like Amira Lidasan questioned the military excuse of pursuing the alleged Isis among Moro communities.

In the program at Mendiola Bridge (now Chino Roces), Lidasan said it is frightening to hear those who do not understand what is happening in Marawi yet say that it is okay to bomb them out, because they’re terrorists, anyway.”

“Who are you to say the Maranao people of Marawi are ‘terrorists?” said Lidasan. According to Aba, the military is mostly harming the civilians in this war and they are just pursuing their interests in the city’s land and resources.

Since the US military’s 2002 visit in the Philippines, there sprung so-called terrorists among the Muslim such as the groups ISIS, Abu Sayyaf, and Maute. Lidasan said these groups have been part of the military excuses for bombing and launching wars in their communities.

After the grand salubong in Bonifacio Shrine, the Moro and national minorities marched under the intermittent rains with supporters from NCR toward Mendiola Bridge. There they slammed the US-Duterte regime.

Their experiences, the indiscriminate bombings, forced closure and continuing threat against Lumad schools, are more than enough reasons for the minorities and the public to conclude that there is no change. In a speech, Kerlan fanagel, leader of Lumad grup Pasaka, said Duterte has not changed the people’s conditions because he is just like if not worse than any of the previous presidents.