MANILA – In Batangas and Nueva Vizcaya, some communities live in fear these days of aerial bombing and military persecution just because they happen to live atop or near resource-rich lands which mining companies want to exploit.

In a forum hosted by the Miriam College Environmental Studies Institute Monday, advocates for the environment discussed what is happening in Batangas and Nueva Vizcaya and the overall worsening plight of environmental defenders in the country which the two provinces exemplify.

Organized by the Environmental Advocates against Repression and Tyranny in defense of Human Rights (EARTH), a newly formed alliance to protect the rights of environmental defenders, they expressed alarm that just this year in these two provinces there were two extra-judicial killings, 10 illegal arrests and trumped-up charges, and over 500 families displaced by intense militarization. All of the victims, they said, are environmental defenders.

The Kalikasan People’s Network for the Environment has already monitored 17 cases of environment-related killings under Duterte this 2017.

“Under the impunity perpetuated by the administration of President Rodrigo Duterte, we are well on our way to once again being the deadliest country in Asia for environmental defenders,” said Anna Kapunan, spokesperson of EARTH.

In the latest report on the killings of land and environmental defenders by international NGO Global Witness, the Philippines ranked third among the deadliest countries in the world for environmental advocates. It ranked as the worst in Asia. Covering the entire year of 2016, the report recorded at least 28 cases of environment-related killings in the Philippines. The first half of that year was under former President Aquino’s term, the latter half under Pres. Duterte. Considering that under Duterte, so far, there were 17 environment-related killings monitored by Kalikasan-PNE, the environmentalists warned that nothing much has changed.

Kalikasan-PNE is actively monitoring the developments in the indigenous communities in Kasibu, Nueva Vizcaya. There’s “a pitched battle” happening there right now against the communities and the Australian-Canadian mining transnational corporation Oceanagold. The latter is expanding commercial operations in the area.

The group noted that since Oceanagold gained a foothold in the Didipio mine in 2006, the host and adjacent communities have suffered human rights violations. These include the violation of Free, Prior and Informed Consent (FPIC), dispersal of communities’ barricades and demolition of their homes, extrajudicial killings, and militarization.

Meanwhile, in Batangas, they reported the aggressive mine exploration and development projects being opposed by communities who were not taken into account in the projects or consulted. The communities have been opposed to the projects but now they are finding themselves the target of increasing violence, a statement of Kalikasan-PNE said during the EARTH’s forum in Miriam.

They said mining tenements owned by Asturias Chemical Industries and Bluebird Merchant Ventures have recently bombarded the area with troops. Some of their leaders have been killed; some have been “illegally arrested,” and the military had launched aerial bombings, driving hundreds of families away from the area. 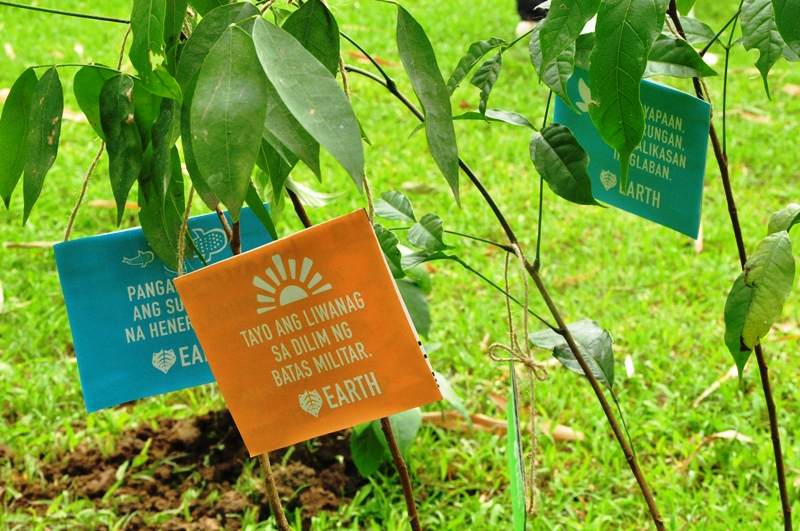 Anna Kapunan said the frontline communities blocking the big mines and other destructive projects are being besieged with rights violations to dissuade them from protesting.

“There is a stark dissonance between Pres. Duterte’s fierce proclamations of holding environmentally destructive projects accountable and the brutal repression the environmental defenders are experiencing under his investment defense programs,” Kapunan noted.