The National Union of Journalists of the Philippines called out Facebook for taking down separate anti-Marcos posts by a journalist and a blogger, calling the social media platform’s move as “a direct infringement on the users’ right to freedom of expression.”

In an alert, the NUJP said Cruz received a notice from Facebook at about 8 pm Tuesday that it has taken down his post entitled “Community Standards ng mga Kawatan.”

Cruz’s post denounced Facebook’s takedown of Badoy’s post containing photos of the alleged draft agreement between the government and the Marcos family. 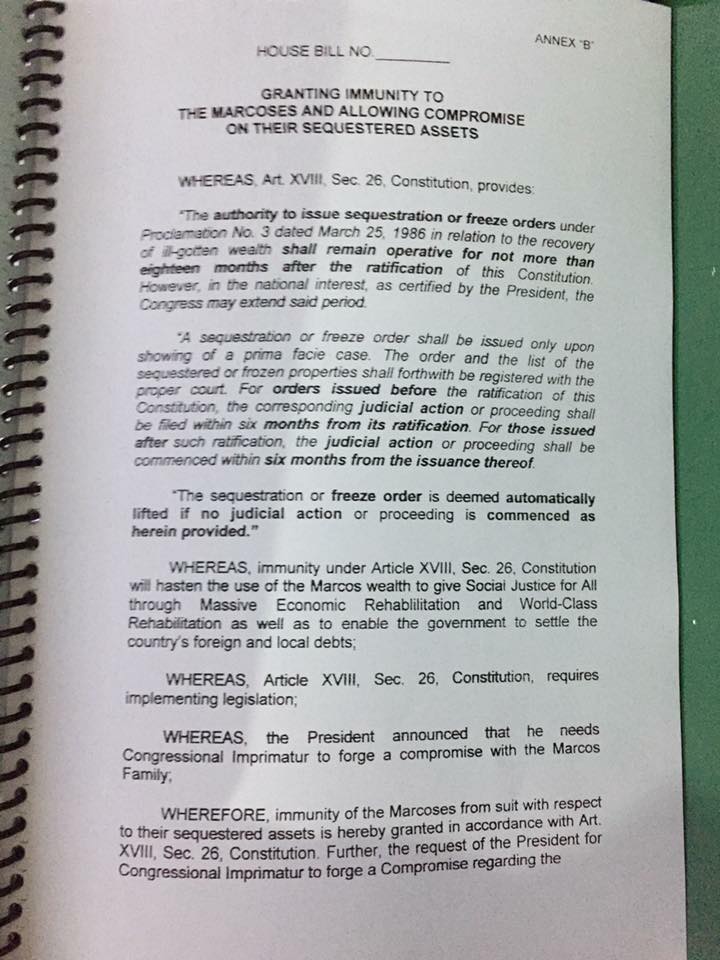 Badoy’s post prompted a reaction from Presidential Spokesperson Harry Roque denying the alleged deal, but confirmed the Palace had received a copy of it.

Badoy’s post was taken down by Facebook Tuesday morning for “violating community standards” but was restored at past 1 pm.

“We shall further study your suggestions,” Panelo’s letter to Lozano further read.

Lozano, through a draft House bill, sought immunity for the Marcoses from further sequestration or freeze orders of their alleged ill-gotten wealth.

Lozano cited that President Corazon Aquino’s Proclamation No. 3 of March 1986 “shall remain operative for not more than eighteen months” after the ratification of the 1987 Philippine Constitution.

In exchange for disposing all pending cases against the Marcoses, Lozano’s draft proposed an unidentfied percentage of the late dictator’s wealth to be shared with the government.

Lozano added that the Marcos wealth should be used by the Duterte government for “massive economic development and world-class rehabilitation” of illegal drug users, rebels and destabilizers as well as to enable the government to settle the country’s foreign and local debts.

In his draft compromise agreement, Lozana wrote that the monies may also address the devastation of Marawi, Tacloban and other places.

“Facebook has also prevented me from posting on its website and from accessing my Messenger account. The official reason they gave is that I violated ‘community standards,’” Cruz said in a statement sent to the NUJP.

Facebook has apologized to both Badoy and Cruz for “accidentally removing” their posts.

“The NUJP condemns Facebook’s baseless takedown of netizens’ posts critical of the government and institutions, as it is a direct infringement on the users’ right to freedom of expression,” the media group said.

“We call out Facebook for its arbitrary ‘community standards.’ which is often used as a basis for expurgating critical and thought-provoking commentaries,” NUJP said.

“We urge the social media platform to review its guidelines to ensure that it will not violate the people’s right to freely express themselves,” the group added. Reposted by