You Are Here: Home → 2018 → February → 20 → Workers camp out vs Duterte tack on contractualization

Workers camp out vs Duterte tack on contractualization

The consensus among labor groups is that contractual workers constitute at least half of the employed, and in many instances, up to eight in every 10 employed.

MANILA – Roderick Camacho, 37, has worked for eight years now in the electronics firm Nexperia (formerly NXP). Yet he remains a minimum wage-earner to this day. An agency-hired contractual, his hold on his job is tenuous. Any infraction, imagined or real, can get him a disciplinary action as what happened to fellow contractuals including the president of their association.

Nexperia is located in an economic zone in Cabuyao, Laguna. It changed name from NXP last year after the Dutch owner sold a division of its business to Chinese investors. Only the owners changed, the company continues to operate front-end manufacturing facilities in Europe and assembly and packaging plants in China, Malaysia and the Philippines.

As NXP or Nexperia, its contractuals work every day for four consecutive days, for 12 hours each day. Camacho says they have two days off and after that, they’re on to another 4-day work of 12 hours per day, followed by two days off. And so on.

Even though there is an 8-hour labor law, he and his coworkers were forced to submit to what amounts to a daily forced overtime. “We get disciplinary action and ‘explain yourself’ notices if we leave after just eight hours of work.”

Along with co-worker Enrico Marcelo who has worked also as contractual for the past seven years, they are among the delegates of Southern Tagalog workers who protested at Mendiola February 19 before they marched to the Department of Labor and Employment for a five-day campout.

Allied with PAMANTIK-KMU, they brought a list of big firms in the region that had been inspected by the Labor department and found resorting to LOC (Labor-only contracting). It covered 29,642 contractual workers, according to their estimates. LOC is considered illegal in the country. A decision declaring a company is engaged in LOC is expected to conclude with the workers becoming regular under their true employers. But PAMANTIK-KMU complained that most of these decisions so far are still only on paper.

Still no law or executive order to end ENDO, contractualization

On February 19, members of Pamantik-KMU and various contractual workers’ organizations held a picket at Mendiola Bridge denouncing the continuing contractualization in the country. They have anticipated its promised solution to the problem right from the first few months in power of the Duterte administration and Labor Sec. Bello. (See: Workers welcome new labor officials, ask penalties for erring employers.)

“It will also serve a warning to (Labor Secretary) Silvestre Bello that pretty soon, there might be a clamor for his ouster if he again issues a decision reversing the order for regularization on the job of contractual workers.” Amorado added that Bello and Duterte have done that to contractual workers of Alaska Milk Corporation. In the case of the Alaska Milk company, the Labor department initially ruled that the workers should have been regulars, but later, the department reversed it. 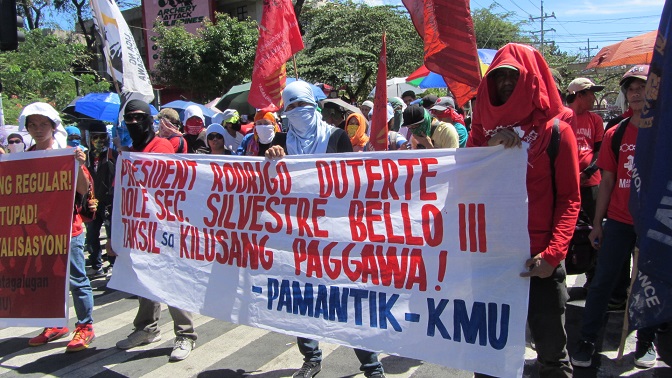 Contractuals of Alaska Milk, Nexperia and other big firms in Southern Tagalog receive lower salaries compared to the regulars. With low pay, they live mostly in rented houses. They could not even afford to bring their children to daycare — they just ask their neighbors or relatives to take care of their kids while they are at work.

Earlier, as the Southern Tagalog workers were pitching tents for their campout in front of the Department of Labor and Employment (DoLE), port workers under the Samahan ng mga Manggagawa sa Harbour Centre also arrived to protest the continuing contractualization being perpetuated by the Labor Department despite Department Order 174, which supposedly seeks to end contractualization.

There are varied estimates as to how many from among the employed today are contractuals or non-regulars. But the consensus among labor groups is that contractual workers constitute at least half of the employed, and in many instances, they report that up to eight in every 10 employed are non regulars.


Before ending their protest action near Malacañang this Monday, Pamantik-KMU members and allies ate lunch boodle style on the sidewalk near the statue of Chino Roces. They shared rice on banana leaves. Their main fare was sliced and sautéed puso ng saging (banana blossom). In their region, it appears that this is one of the few vegetables that they could afford with their meager wages.