“President Duterte’s order is clear, and we are going to implement that [ending contractualization] with Usec Joel Maglunsod.”- Labor Sec. Sylvester Bello III

MANILA – Progressive workers from Southern Tagalog experienced a first in recent memory at the Department of Labor and Employment’s headquarters last Thursday, July 7. “They were not allowed to enter before, now they’re allowed in,” as Celeste Maring of DOLE’s public information office told Bulatlat when asked what changes have started to come to their department since President Duterte assumed office.

Bello went down from his office and shook hands with the workers. The workers, in turn, came with warm greetings for his appointment by President Duterte as Labor Secretary. The workers also welcomed the appointment as Labor Undersecretary of Joel Maglunsod, a longtime labor leader from Kilusang Mayo Uno in Mindanao.


But the workers also said that since contractualization, low wages and union repression persist, they would still be conducting a picket in front of the Labor Department, clarifying during their program that they were not criticizing the new Labor chief, but the anti-workers policies that remain in force. In particular, they cited the lack of actual resolution in many of their long-pending labor disputes, despite some of it gaining favorable decisions from Labor Department agencies and the courts. Most of the disputes they brought to the attention of the Labor Secretary began – and dragged on — under the former Aquino administration. Some of it have won favorable rulings in Labor offices and courts, yet are not being enforced by the employers.

The workers said they welcome the possibility of these disputes being resolved soon under the new administration. They also looked forward to the realization of President Duterte’s promise to end contractualization.

They came with fact sheets on the ongoing labor disputes from at least 11 big establishments operating in Region 4-A, including Lucio Tan Group’s Tanduay Distillers Inc.

Later, ten workers’ representatives were invited up to one of the Labor Department’s conference rooms to discuss their labor issues. But Labor Secretary Bello had to leave five minutes after formally opening the talks. He just welcomed the labor leaders and said he had a prior appointment with employers.

“If I had known you were coming, I would have allotted more time,” Bello told the leaders of Pamantik-KMU.

In his place he introduced Labor Undersecretary Joel Maglunsod, saying the workers are likely “more comfortable” talking to him. He said, “Whatever you want to say to me, you could tell it to USec.”

With Labor Undersecretary Maglunsod was another appointee of President Duterte, lawyer and now Labor Assistant Secretary Ding Say. Other concerned officials from the Labor Department who have a say in the labor disputes brought to the table by Pamantik, such as the director of the Bureau of Labor Relations, and some labor lawyers, also attended the meeting.

It lasted three hours. In the end, the workers received assurances that the Labor Department will look into the matters they brought.

Maglunsod encouraged the workers to continue holding mass actions to hasten the resolution of long-pending cases. Ding Say, meanwhile, said they will get in touch with the employers named in the labor disputes and after that, they will meet again the following week with the leaders of Pamantik and representatives of the concerned workers.

As to the disputes where the Labor Department has previously issued its decision, such as in the case of the Tanduay contractuals, Labor Secretary Bello said that it is now up for implementation.

What the Labor officials pledged to do

Labor Secretary Bello assured the workers that it is clear the President has ordered them to put an end to contractualization.

“If we don’t do that, we will be kicked out by the President. He emphasized that when we talked,” Bello told unionists and leaders of Pamantik-KMU at the start of their meeting. 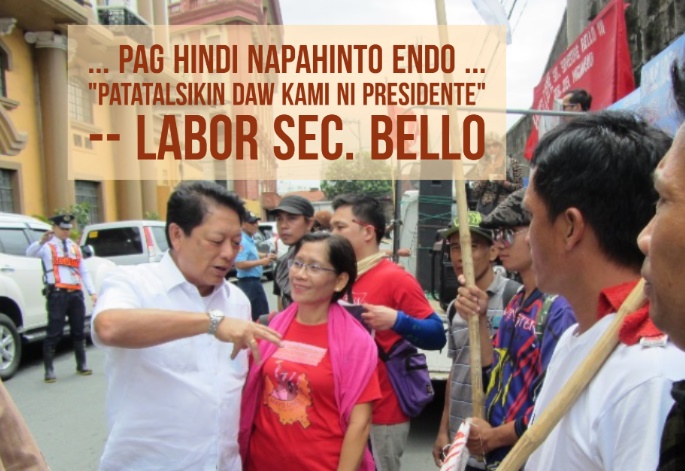 “President Duterte’s order is clear, and we are going to implement that with Usec Maglunsod. Help us on how to do that … help Usec Maglunsod with the drafting of a DO [department order] that will either revise or repeal DO 18-A,” Bello asked the unionists with Pamantik in Filipino shortly before he left to meet with employers.

DO 18-A is the Labor Department’s order, issued in 2011, which differentiates between illegal labor-only contracting and permissible job contracting. But the labor groups revealed that in practice, it only serves to guide employers on how to legally implement contractualization.

In the task of crafting a new policy on contractualization, Maglunsod shared that even as it is clear their marching order is to end it, how to do it or which mechanism to put in place is still being studied.

He said Bello has met with the regional directors on his first week as Labor Secretary, and also with those from DOLE attached agencies, to remind them of the task. So far, they have garnered some proposals.

Maglunsod said the Labor Department is also mulling about instituting a hotline where workers can report about contractualization.

The number 5-5-5 is associated with the endo (endo of contract) practice, where employers terminate a worker’s contract after his or her fifth month, to avoid his or her being regular on the job.

But asked what the Labor Department intends to do on cases where there are already findings the employers have been engaged in illegal labor-only contracting, Labor ASec. Ding Say said they would get in touch with the concerned parties. 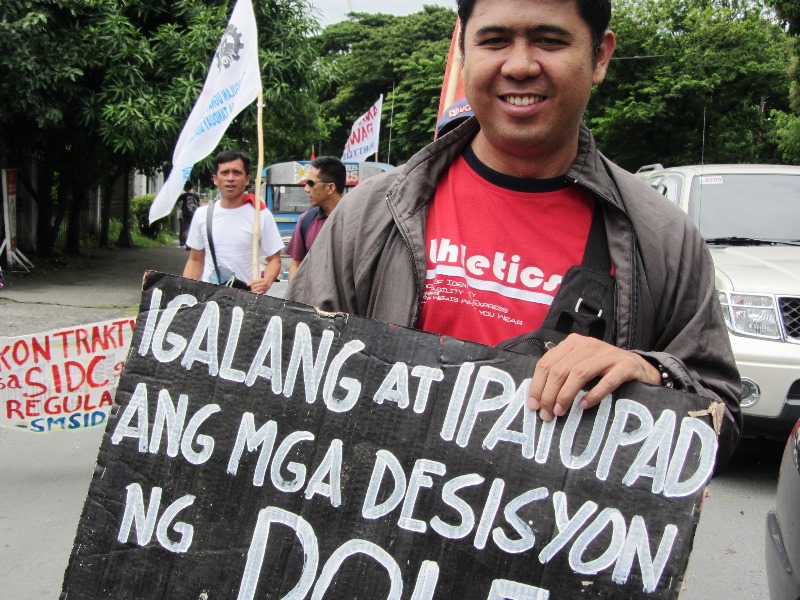 Lucio Tan’s Tanduay Distillers Inc in Laguna has been found to be engaged in the illegal practice of labor-only contracting (LOC), and his company has been directed many times by the Labor Department to comply with the law, to take back the longtime contractual workers it dismissed via labor agencies (cooperatives) and to accord them the regular status they deserve.

But to this day, the union of Tanduay’s long-time contractuals said the order to reinstate them has not been implemented. They are still on a picket protest across from the gates of Tanduay Distillers in Laguna. They sent representatives at last Thursday’s consultation with the new Labor officials in Manila.