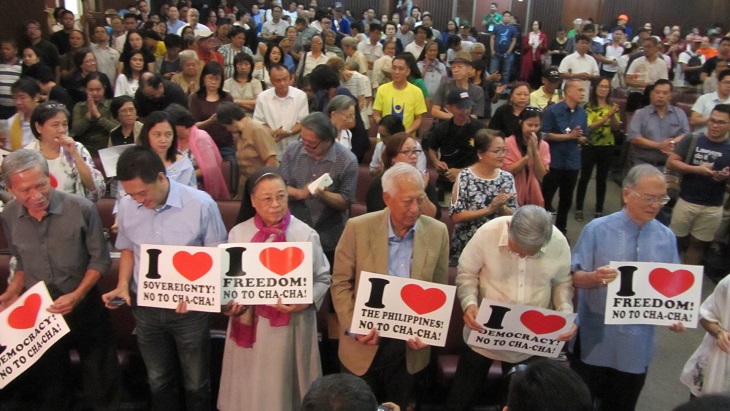 The proposed cha-cha will dismantle the Pro-poor and Pro-Filipino provisions of the 1987 Constitution.

MANILA – “Even if you love President Duterte, or you just fancy ‘federalism,’ you need to oppose the current moves to change the Constitution. The issue goes beyond the current president, and federalism is not the solution to the country’s problems.” These are some of the conclusions aired by Bayan Muna leader Neri Colmenares recently as more legal luminaries also disapproved of the proposed charter change. They founded the No to Cha-cha Coalition last week. This week they are inviting the public to join the EDSA anniversary rally to protest this cha-cha drive.

In a speech at the founding of No to Cha-cha Coalition, former COMELEC Commissioner Christian S. Monsod said the articulated purpose of the proposed charter change by the Duterte administration is the same as the six previous failed attempts.

He said the PDP-Laban draft Federal Constitution summarizes the reason for its proposal: ‘…Our system of government has resulted in a grave imbalance in the distribution of resources among regions and local government units.’ It dismisses the “highly-centralized form of government” and proposes the federal system.

But a look at the proposed cha-cha shows it won’t be addressing those problems of “imperial manila and of uneven and inequitable development,” according to Monsod. On the contrary, all these would likely worsen with the proposed cha-cha. Based on his study of these cha-cha proposals, the Duterte agenda in cha-cha is not addressing what it purports to solve.

What cha-cha proposes to do

The proposed cha-cha provides for at least two shifts in the system of government – a shift to a federal system and a shift from a presidential to parliamentary system. The proposed amendments also seek to replace what Monsod describes as the central theme of human rights and social justice in the 1987 Constitution into “the themes of Business.”

“The proposed cha-cha advocates foreign direct investments (FDI) by transferring the power to regulate foreign ownership from the Constitution to the Congress,” Monsod said. And with these, he adds, the proposed cha-cha will weaken the check and balance system of the government.

Colmenares of Bayan Muna and the Movement Against Tyranny have warned also that the current proposed cha-cha will bring back dictatorship and tyranny that EDSA and people power pushed back.

Moving away from the anti-dictatorship drive of the present Constitution, which was drafted right after Edsa People Power, the Duterte administration’s cha-cha proposals are seeking an increased concentration of power in the Executive, especially during the long transition period of at least 11 ½ years, Monsod said.

(Read former Comelec Chair Christian Monsod’s full speech at the No to Cha-cha Coalition founding assembly, entitled: “A Cha-Cha against the Pro-poor and pro-Filipino provisions of the Constitution”

“We must not only be well-meaning but correct,” Monsod said, referring to false or unsubstantiated promises of cha-cha. These include federalism and foreign investments, which the proponents are characterizing as answers to age-old problems. Colmenares has said federalism is just a smokescreen being used to direct scrutiny away from the unpalatable contents of cha-cha. In fact, Monsod pointed out, there is no mention at all of “federal” or “parliamentary” in the Philippine Development Plan 2017-2022 and Ambisyon2040.
On the other hand, the proposed cha-cha will dismantle the Pro-poor and Pro-Filipino provisions of the 1987 Constitution, Monsod said in the title of his speech against cha-cha.

Built-in the cha-cha proposals are anti-poor, anti-Filipino provisions that Colmenares said would consign the next generations to even worse poverty than today.

Among others, Monsod pointed out not just the proposed lifting of foreign ownership restrictions but also the power to regulate them. Cha-cha wants to bring it away from the Constitution and under Congress, instead.

And, if people question or launch protests as they invariably would as prices rise, wages fall, and livelihoods,lands, housing, services are all taken away from them, cha-cha is “downgrading social justice as a compelling principle of the Constitution,” Monsod said.

That is exactly the opposite of what should be done to address the core problems of mass poverty and gross inequalities, he added.

About federalism, Monsod said the expressed intention could just as well be reached with better implementation of the Local Government Code.
To former Chief Justice Hilario Davide, the “long and short of the rush to Charter Change at this time is tyranny.” He urged the proponents of cha-cha not to lure or entice the people to amend or revise our Constitution when surveys show a vast majority doesn’t want it revised or amended. He also questioned the proponents if they had read the Constitution well, if they have done their best to implement it, before they start thinking of “mangling or tinkering” with it.

Davide said that although the 1987 Constitution is not perfect — all things being not perfect – it is still quite the best and needs only to be implemented. “It is the only Constitution I know of which is pro-God, pro-Filipino, pro-People, pro-Life, pro-Family, pro-Marriage, pro-Poor, pro-Social Justice, pro-Human Rights, pro-Women, pro-Environment, among others. It contains sufficient provisions against abuse of power, and guarantees people’s active participation in governance, including the use of people power. It is the only Constitution in the world which institutionalizes the doctrine that a public office is a public trust.” (Read the full text of former Chief Justice Hilario Davide’s speech criticizing cha-cha: “Charter Change at This Time is Tyranny”)

Twice as hard struggle to defeat this cha-cha, but remember EDSA

A broadening coalition of critics and opponents cha-cha is forging consensus that the people must also defeat this cha-cha. Bayan Muna’s Colmenares decribed it as “the worst ever” compared to previous attempts.

Monsod acknowledged that compared to previous attempts to change the constitution, this one seems to be gaining traction because of Duterte. If the cha-cha moves are gaining headway, it’s mostly aided by smokescreens such as federalism and promises that things will be better. But then those promises are also touted in TRAIN tax reforms, planned jeepney phaseout, expansion of plantations, mining, and orders legalizing contractualization, among others.

Recent pronouncements by the President point to an escalation of attacks on the people, Bayan said in a statement. They warned that the Duterte regime wants to wage a bloody war against revolutionary groups and the people — disregarding international humanitarian law and closing all avenues for peace negotiations. Bayan said the state terror’s aim is to force the people into blind submission.
“In truth, the regime really wants to eliminate any and all opposition to its plans of imposing a fascist dictatorship through Charter change or Martial Law,” Bayan said.

But there are now increased concerns aside from drug killings that foreshadow Duterte’s eroding popularity. Various groups have been restive in the face of price hikes due to the administration’s TRAIN tax reforms. There are the drivers’ protests over the planned phaseout of jeepneys in favor of corporate-managed jeepneys; the continuing mining operations, expansion of plantations and destructive energy projects, the lack of safe, affordable and efficient public transport despite the billions of public funds plunked into it. Among workers, there are protests against the continuing contractualization of jobs.

In the coming EDSA anniversary and the days that will follow, the broad Movement Against Tyranny and No to Cha-cha Coalition are inviting the public to come out and join the planned protest activities.

“This year’s protests are imbued with a great sense of urgency as the Duterte regime pushes for Charter change, extends Martial Law and wages all-out war against the people,” the umbrella group Bagong Alyansang Makabayan (Bayan) said in a statement.

Almost every year since the EDSA people power, participants and Martial Law survivors strove to send a #NeverAgain message to Martial Law and dictatorship. Bayan says it is ironic that on the same month the nation is set to mark the downfall of the dictator Marcos, “President Duterte saw it fit to label himself as a dictator, and “his congressional allies are pushing for term extension ala-Marcos.”