“Let there be no doubt that harassing, punishing and terrorizing a free press are symptoms of a tyranny.”

On Feb. 20, Duterte banned Rappler reporter Pia Ranada from entering Malacañang Palace. The order came a day after Special Assistant to the President Bong Go accused Rappler and the Philippine Daily Inquirer of reporting “fake news” on the Navy project, during a Senate hearing on the Philippine Navy frigates deal.

Senior Deputy Executive Secretary Menardo Guevarra justified the move claiming that Rappler’s accreditation with the Malacañang Press Corps has accordingly ceased unless the Court of Appeals issues a restraining order against the Securities and Exchange Commission’s decision. In a ruling dated January 11, the SEC revoked the registration of Rappler alleging that the latter is “liable for violating the constitutional and statutory Foreign Equity Restriction in Mass Media.” The online media outfit maintained it is 100 percent Filipino-owned.

For the National Union of Journalists of the Philippines (NUJP), Duterte “has acted much like a petulant child throwing a fit.”

“…[w]hen the highest official in the land chooses to wage a personal vendetta against an individual, whether a journalist or a media outfit, it sends a clear and chilling signal that everyone else better report only what he wants you to or else,” the NUJP said. 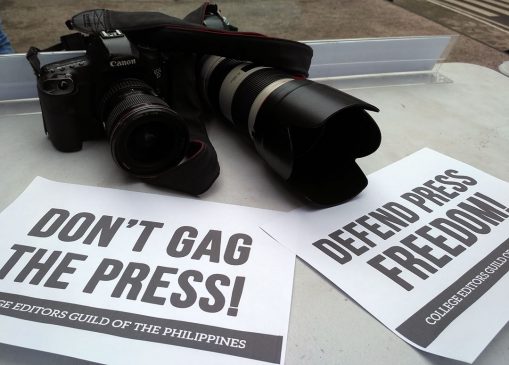 The Center for Media Freedom and Responsibility (CMFR) deems that the ban is a form censorship. The media watchdog stated it “is a clear abridgment of the Constitutionally- protected freedom of the press and is meant to silence critical and responsible press organizations.”

In a separate statement, media and arts alliance LODI (Let’s Organize for Democracy and Integrity) said the ban on Ranada reeks of vengeance and thuggery.

LODI vowed to bring this issue to the fore at the rally commemorating the 32nd anniversary of EDSA uprising on February 24 at the People Power Monument. The February 1986 uprising toppled the Marcos dictatorship which curtailed press freedom and civil liberties.

“Let there be no doubt that harassing, punishing and terrorizing a free press are symptoms of a tyranny. Tyrants are scared and insecure of independent-minded and critical journalists and citizens,” Inday Espina-Varona of LODI said.