Proposed amendments to the 1987 Constitution expand and deepen the control and scope allowed for foreign businesses.

MANILA – The controversial Mining Act of 1995 turned 23 years old last March 3. To mark the event, groups of indigenous peoples and environmentalists held a picket protest at the gate of Congress on Monday, March 5. They feared that under the Duterte administration’s proposed charter change, the already recorded destruction resulting from the Mining Act of 1995 will be a mere preview of things to come. For pushing charter change, President Duterte was depicted by indigenous groups during the protest as a ‘Dudirty’ Dragon. They viewed him not only as an agent of killings and of destruction but also of dirty energy and industry.


Duterte began his presidency critical of destructive mining operations. But Congress removed his first Environment Secretary, Gina Lopez, who at the time of her removal had mounted a 10-month mining crackdown highlighted by an unprecedented issuance of closure and suspension orders for 26 of the country’s 41 mines, and cancellation of 75 mining contracts. Former military chief Roy Cimatu replaced Lopez and subsequently started reversing her orders.

The Congress should have placed among its top legislative priorities the repeal of the Mining Act, said Leon Dulce, national coordinator of Kalikasan People’s Network for the Environment.

The repeal is the logical step to take, especially since, Dulce said, the Duterte administration has been complaining about policy deficiencies supposedly constraining them from implementing the mining crackdown started by former Environment Secretary Gina Lopez.

Why they want to repeal Mining Act

Kalikasan PNE blames the Mining Act for having allowed transnational corporations to “steal 79 percent of the country’s generated mineral wealth” since it took effect in 1998. On top of that, they said, the law gives these corporations auxiliary rights that allow it to clear out forests, divert rivers and springs, and in the process, push away the communities living at or near the mine sites.

As the affected communities resisted for their survival, they are dealt with violence by the mines’ guards and government troops. 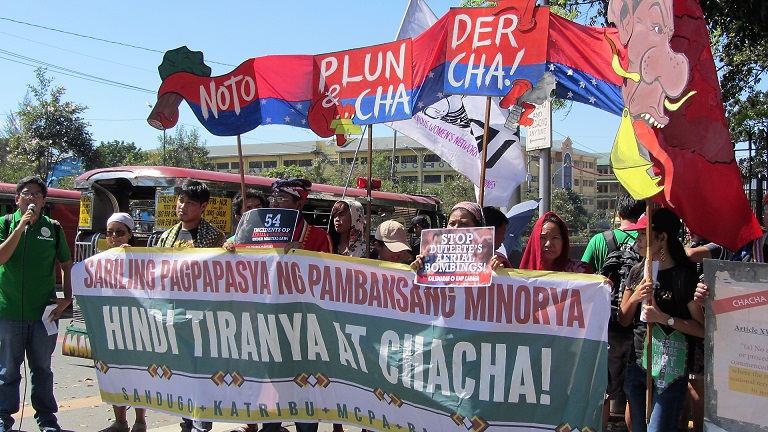 Under the proposed charter change being deliberated in Congress, the licenses being given to mining TNCs under the Mining Act of 1995 will be expanded some more. The indigenous peoples who are already bearing the brunt of these mining operations, through militarization, forced evacuation and loss of livelihood, anticipate a more difficult time ahead. They picketed the gate of Congress March 5 to take it to task for the enactment of the Mining Act in the first place and the cha-cha drive that they say would worsen it.

Among the proposed constitutional amendments under deliberation in Congress is allowing 100-percent foreign ownership of lands, including mineral-rich lands. This expands and deepens the control and scope allowed for foreign businesses.

As per the 1987 Philippine Constitution and as reflected in the Philippine Mining Act, foreigners cannot be majority owners of mining corporations. There is a required 60-40 Filipino to foreign equity ratio on companies that explore, develop and use the country’s natural resources. At present it is also the state and not the mining corporations who owns the country’s mineral resources – but the Mining Act details the ways mining companies can get their hands on these resources, via agreements and contracts with the government signed by the Environment Secretary.

Big, foreign-owned corporations had to allegedly resort to corporate layering and Filipino dummies to get a bigger, if not the entire stake, in the country’s mines. While critics of Mining Act have repeatedly called attention to the ways Mining Act has allowed large miners and foreign companies to circumvent the foreign equity cap, these ways are not being corrected but would even be expanded under the Duterte administration’s charter change.

In a statement, Sandugo noted that the 1987 Philippine Constitution “supposedly safeguards” the country’s land and resources. But it has also seen for itself how “big foreign entities collaborate with oligarchs, bureaucrats and politicians to circumvent these protections.” Now, they said, Duterte’s cha-cha is removing all barriers for the foreign ownership and brazen exploitation of land and resources.

Sandugo council members led a symbolic tearing up of copies of these cha-cha proposals during their picket in front of Congress. They agree that there is a need for comprehensive socio-economic reforms and system change. “But President Duterte’s charter change does not address the roots of poverty and social unrest,” they said in a statement.

“Our experience has shown the duplicity of his kind of talk,” Sandugo said. The group vowed they will continue the struggle for “a real system change”.

Dulce of Kalikasan PNE also urged everyone concerned with the environment to “defeat this single biggest move that could lead to widespread ecological collapse.” He warned that cha-cha aims not only to wholesale the country’s mineral and other natural resources but also to prop a Duterte dictatorship. The latter, he said, is for facilitating the plunder of nature and suppressing dissent.