‘Endo’ kings not in DOLE list are Duterte’s friends 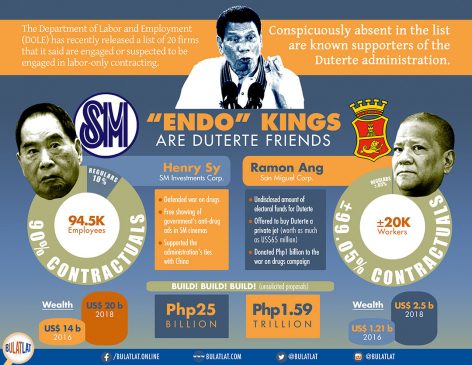 What could possibly explain the exclusion of these giant conglomerates – two of the biggest not only in the Philippines but also in the Asian region?

MANILA — The Department of Labor and Employment (DOLE) has recently released a list of 20 firms that it said are engaged or suspected to be engaged in labor-only contracting. Some of the country’s largest companies topped the list, including Jollibee (14,960 workers); Dole Philippines (10,521); and PLDT (8,310).

Conspicuously absent in the list are known supporters of the Duterte administration.

One is SM, which is known for its chain of malls that hires thousands of contractual workers. According to Labor Secretary Silvestre Bello III, SM was not included in the list because it promised to regularize a total of 10,000 workers. He said that they are “satisfied” already with the retail giant’s commitment. But still, such promise does not justify the absence in the DOLE list of perhaps the most notorious and known biggest employer of contractual workers in the Philippines.

By its own account, the SM Group has more than 94,500 employees which include various companies under the conglomerate engaged in banking, financing, property, retail, malls, hotel, resorts and entertainment. According to one estimate, nine out of 10 SM employees are contractual workers.

Another is San Miguel Corporation (SMC). The diversified conglomerate (with operations in food and beverages, packaging, fuel and oil, power, and infrastructure) is said to employ around 20,000 workers, of whom only about 1,000 are regular workers.

What could possibly explain the exclusion of these giant conglomerates – two of the biggest not only in the Philippines but also in the Asian region?
The obvious answer is their close ties with President Duterte.

Among the country’s major business groups, SM has been one of the most supportive to the current regime. Its top officials are among the select tycoons that share an intimate dinner or travel abroad with the President to look for business opportunities, and invited to government events to show support to centerpiece Duterte programs like the “Build, Build, Build”. Along with state-run banks, SM Group’s BDO Unibank is financing Duterte’s contentious modernization program for jeepneys.

Its officials have publicly defended the controversial war on drugs and also offered the free showing of government’s anti-drug ads in SM cinemas nationwide. They supported the administration’s warming up of ties with China even as the latter has occupied and militarized Philippine-claimed territories in the South China Sea.

SM was founded by the country’s only trillionaire Henry Sy Sr. who has been the richest Filipino for over a decade now. Sy’s already massive wealth has been rising astronomically under Duterte – from just below US$14 billion in 2016 to US$18 billion in 2017 and further to US$20 billion in 2018. That’s almost a 54 percent increase in just three years.

SM aims to cash in on closer Philippine-China ties under Duterte. China is the world’s largest consumer market and the second biggest economy that could soon topple the US as number one. For Filipino oligarchs, the potential for profits is vast.

On top of the already seven malls it has in China, SM is building a “supermall” in the major port city of Tianjin (said to rival the size of the US’s Pentagon building) as well as residential projects in various key Chinese cities. With closer bilateral ties, Chinese tourists are also flocking the country, benefitting SM’s interests in resorts and entertainment.

An even more vocal apologist of the Duterte administration is SMC, especially its head honcho Ramon S. Ang. The SMC president was among Duterte’s campaign contributors in 2016 giving an undisclosed amount and perhaps other forms of support as Ang wasn’t even listed in the official Statement of Contributions and Expenditures (SOCE). Ang also offered to buy Duterte a private jet (worth as much as US$65 million) that he could use as President while donating Php1 billion to the Chief Executive’s pet campaign, the war on drugs.

Like Sy, Ang’s fortune has also vastly grown in the past three years. From a reported net worth of US$1.21 billion in 2016, his wealth has more than doubled to US$2.5 billion in 2018. Duterte’s infrastructure push apparently also pushed up Ang’s riches, which also include interests in construction.

Like SM, SMC has been capitalizing on Duterte’s programs. SMC is among those most aggressive in expanding in Mindanao particularly in establishing vast plantations and constructing infrastructure. In partnership with Malaysia’s Kuok Group, the conglomerate is developing about 18,495 hectares of forestlands covering four Davao del Norte municipalities for oil palm production. Just last August 2016, SMC also opened a 2,000-hectare industrial estate in Malita, Davao Occidental that also has a 20-meter deep seaport that can accommodate container vessels.

SM and especially SMC are among the leading proponents in Duterte’s “Build, Build, Build” infrastructure development program, including through the controversial unsolicited route. SMC alone accounts for 53 percent (P1.59 trillion) of the cost of all unsolicited proposals (P3 trillion) that have pitched to the Duterte administration. These include the P700-billion New Manila International Airport; the P338.8-billion Manila Bay Integrated Flood Control, Coastal Defense and Expressway Project; and P554-billion expansion of the Metro Manila Skyway and the South Luzon Expressway (SLEX).

SM (together with the Ayala group), on the other hand, has submitted an unsolicited proposal to build a P25-billion 8.6-kilometer elevated toll road that will supposedly help decongest traffic along EDSA. But as SM itself admitted, the main objective of the toll road is to increase access to its Mall of Asia complex. Through its BDO Unibank, SM also aims to profit from the “Build, Build, Build” by lending to project proponents or operators.

One of the major campaign promises that Duterte made was ending “endo” (end of contract scheme or contractualization). But two years into his presidency, that promise has remained largely unfulfilled.

With the biggest employers of contractual workers like SM and SMC as Duterte’s biggest backers, that should not come as a surprise.