In the gathering, Public Interest Law Center managing counsel and counsel for the four, Rachel F. Pastores explained how the case against the four leaders are politically motivated.

She said history would show that those who dissent against the government and its policies are being targeted through the filing of fabricated cases, being subjected to harassments and worse, become victims of extrajudicial killing.

The Makabayan 4, as leaders of the progressive groups, were not spared.

In Feb. 2006, under the then President Gloria Macapagal Arroyo, a rebellion case was filed against the Batasan 6 together with the late Anakpawis Rep. Crispin Beltran who was arrested and placed under hospital arrest and former Bayan Muna Rep. Joel Virador. The five, with the exception of Beltran, sought refuge in the House of Representatives.

It was during that time when Arroyo declared a “state of national emergency.”

The Batasan 6’s counsel filed a petition at the Supreme Court to junk the rebellion charges. The High Court eventually decided in favor of the accused in June 2007.

The filing of fabricated charges against Ocampo and others did not end since then. In Aug. 2006, another case of multiple murder was filed against Ocampo, Rafael Baylosis, Randall Echanis and Vic Ladlad and other local leaders over a purported mass grave found in Leyte. Pastores said they filed another petition at the SC. The SC partially granted the petition by setting bail and issuing a temporary restraining order.

In Feb. 2007, a certain Isabelita Bayudang and Cleotilde Peralta, widows of Carlito Bayudang and Ricardo Peralta, filed a cancellation of registration against Bayan Muna Partylist before the Commission on Elections for allegedly committing acts of violence by ordering, together with the high officials of the Communist Party of the Philippines and the New People’s Army, the “liquidation” of those who oppose Bayan Muna. But this was also dismissed due to lack of merit on June 1, 2007.

In 2008, the widows once again filed double murder charges, one filed in Guimba and two in Palayan Nueva Ecija, against the four leaders. Pastores said the Guimba case was dismissed due to lack of probable cause.

Judge Turla, in a resolution in July 18, 2008 found no probable cause in the double murder charge in Palayan. But instead of dismissing the case, Turla reverted the case to the fiscal. The lawyers filed a petitionat the SC, but the high court remanded the case to Turla in 2017.

Come 2018, Turla issued a warrant of arrest against the four without further explanation. It was a bewilderment for them, lawyers as well as their clients as there are no additional evidences to the case. 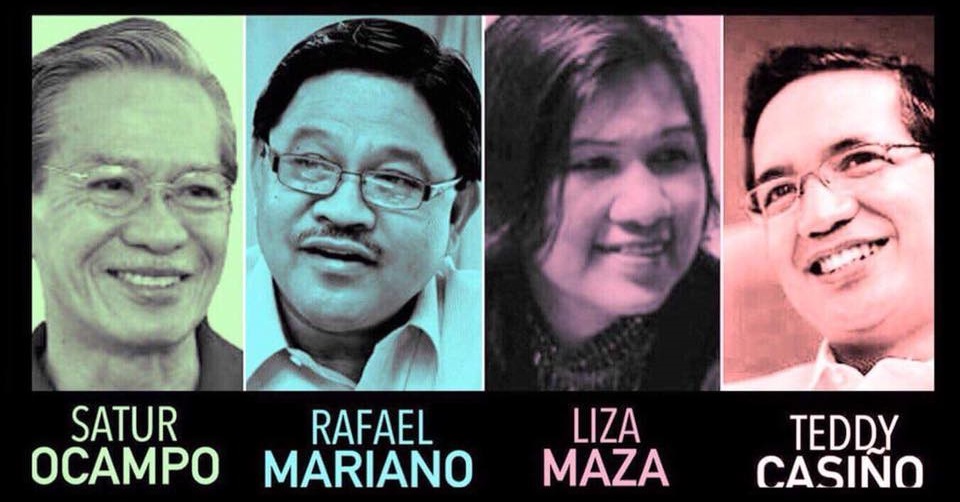 All these complaints, said Pastores, were initiated by the police and the military. Most of the complainants and witnesses are rebel returnees, members of the paramilitary that are in the custody and protected by the military.

All complaints also link them to the CPP-NPA, said Pastores. “And this have an effect to them; they can be arrested anytime or killed.”

All these efforts are pursuant to the policy of the government, said Pastores.

There was an Interagency Legal Action Group (IALAG), which was organized to investigate for the purpose of persecuting those they deemed as threats to national security. The IALAG was recommended to be abolished after a mission in the country of then UN Rapporteur on extrajudicial, summary or abitrary executions Philip Alston in 2007. The current administration crested an Interagency Committee for Legal Actions (IACLA) with also the same objectives, Pastores said.

“For the government, threats to national security are those who are critical of the government and those who voice out their dissent against the government and its policies. Many of them are members of progressive groups and activists,” she added.
But amid the curtailment of the people’s civil and political rights, Pastores said, what is evident is that they stand against all forms of political persecution and challenged them in court.

“All cases against them were dismissed,” she said adding that the support of the people is instrumental in proving that there is no truth behind the allegations against them.

On Aug. 13, the PILC received the decision of Palayan Regional Trial Court Acting Presiding Judge Trese Wenceslao dismissing the case against the four due to lack of probable cause and quashed the arrest warrant against them.