(1st in a series of 3: DENR in Mock Battle for Manila Bay rehab?)

This is one of the reports in a series produced by Bulatlat.com with the Asia-Pacific Forum on Women, Law and Development (APWLD) Media Fellowship. The series aims to report on linkages between gender, ecological conflicts and climate change.

MANILA – If there are groups of Filipinos whose daily life confronts the most immediate impact of climate change, the fisherfolk are among those at the forefront. Their families live by the sea, on the banks of rivers and on islets that shrink or expand with the tide.

They are the first to face the consequences of sea levels rising more than usual, when the typhoons that brew from the seas are more disastrous, or when currents are hitting the land more brutally after some natural guards or breaks had been defaced. For example, after 600-plus old-growth mangroves were cut in April last year, there were changes in the water and they felt it immediately in their reduced catch.

How the poor fisherfolk cope with changing climate

In the coastal communities fronting Manila Bay in Bulacan, “climate change” is not a household word but they grapple with coping solutions in their daily life. One ready example, they have to more frequently repair and raise their embankment or their “waterwalk”.

Living on narrow strips of land above water, dry space is scarce and to extend the living areas they build houses on stilts, connected by walkways fashioned from strung-together poles of bamboos. Less than a meter in width, the walkway loops around their island-homes, their collectively-built adjustment to the fact that the island is not wide enough.

From another sitio or sub-village, in a separate interview, an elderly woman recalled how, years earlier, they had more earthen embankments. The sitios were connected by more levees unlike today. “We could walk from one sitio to another in those days,” said Flor P. Salvador, 77, a resident of Taliptip since 1969. Now they have to ride a banca just to visit neighboring sitios.

In the bigger island-village of Binuangan, Obando, the walkway is more easily worn out not just by the trudging feet but by the higher water levels and stronger currents. Similar to what they have to do with their houses, they have to raise it by piling more wood or bamboo on top of the old parts.

Some families rebuilt their home using concrete and cement. It protects them better during storms. “Our houses don’t just get swept away or destroyed,” an old fisherman told Bulatlat.

But such a house on islands barely above water can also sink faster if the ground underneath it is liquefying faster than its neighbors.’ 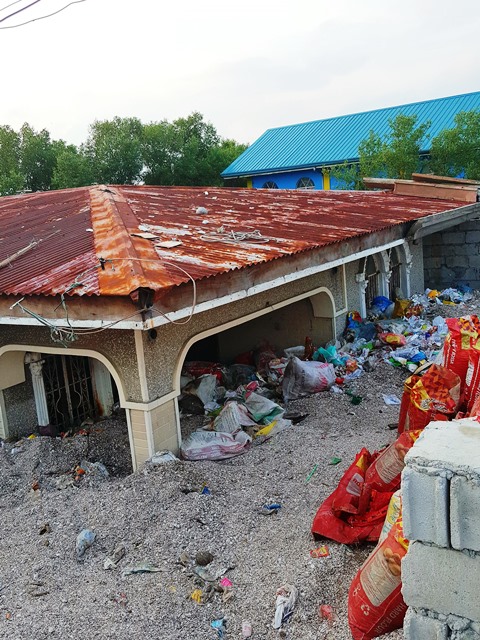 In the coasts of Bulakan, Bulacan, the communities are scattered over rivers and shallow loam soil narrower than Salambao or Binuangan of Obando.

Despite all these, the people here have adjusted to living with the river and the bay. They are proud to say they are feeding themselves and their families, sending their children to school without asking much from the government. They contribute to the country’s need for relatively affordable fresh fish, shells and crabs.

They are in position to raise the alarm when the precarious balance of this ecosystem of rivers, islets and the bay was tinkered with, like when about a hectare of mangroves was felled in April last year. In the following visits of typhoons, they reported its worrisome results. Various sitios of Bulakan, Bulacan suffered unprecedented flooding and soil erosion.

Years before, these fisherfolk had fought to stop the privately owned but government-backed “sanitary landfill” from operating by the coasts of Manila Bay in Obando. It was a fierce struggle that older residents now say only the reign of terror of former army major Jovito Palparan under the former Gloria Macapagal-Arroyo administration enabled its forced operation. Some fisherfolk leaders and organizers in the area had been reportedly abducted, tortured and killed. The residents petitioned against it in court but in 2014 the Court of Appeals junked their petition and allowed the dumpsite to continue.

Kimberley Lazaro, 31, a resident of coastal Obando since birth, said that since the dumpsite was allowed, their fish catch has dwindled. They lost the mussels and crabs that used to abound at the muddy banks of the river. For a fisherwoman like her, it means spending more to go farther out on the river or the bay itself to catch fish.

“If you didn’t start out living around here, you could not endure the stench and the flies. You will eat under a mosquito netting,” she told her fellow fisherfolk as they convened the network opposed to the planned reclamation in Bulakan.

A lesson they have learned through years of forced landfills and reclamation along Manila Bay: this exacts a price and some are not as predictable as worsening pollution and dwindling fish catch. Their part of the coast in Obando now stinks, the river is more polluted, their communities are more vulnerable to flooding, erosion, and subsidence. Worse, these same poor fisherfolk are frequently the government’s scapegoat whenever they seek to push their brand of development of the bay.

Now the coastal communities’ initial efforts to cope, by themselves, with direct impact of climate change and worsening pollution while they shore up their communities and sources of livelihood are coming into conflict with government thrusts concerning the bay.

Ironically, while the government is riding on the popular call for cleanup of Manila Bay and harnessing free labor of volunteers for fishing out thrash that washed up in Manila Bay, it is, on the other hand, disproportionately blaming the poor and seeking their demolition in favor of reclamation plans and other real estate development.

Environmentalists Kalikasan PNE and national fisherfolk group Pamalakaya cited the study of Ocean Conservancy in 2015 that 74 percent of plastics that ended up in the sea came from previously collected garbage. Another cause of pollution in Manila Bay, they said, is the failure of government itself to provide a significant water and solid waste treatment and management.

In the coastal areas and rivers in Bulacan, there are 23,051 “informal settler families (ISF),” said the Manila Bay Coordinating Office (MBCO) of DENR in Central Luzon during a scheduled Manila Bay cleanup held in Obando.

But the DENR has been silent about the National Economic Development Authority (NEDA)-approved proposal of diversifying giant, San Miguel Corporation, to build an international airport on rivers, fishponds and mangroves in Bulacan along Manila Bay. This is more massive than the trash or the presence of ISF. It means burying the coast under million cubic meters of engineered soil and rock-cement. It means bringing in machinery for mega-construction and reclamation after the fisherfolk communities have been driven away.

It is not clear if the fisherfolk targeted for displacement by SMC’s reclamation project are also among the ISF complained by the MBCO in Region 3. What is clear is that since the locals began hearing about the San Miguel Corporation projects, the government and SMC have all but ignored their demands for information and a say in the future of the fishing grounds and the bay.

The locals say they would hear warnings that the SMC has a deep pocket and that they couldn’t win their demand to retain the fishing grounds as such. From October to November last year, a contractor company of SMC called Silvertides conducted surveys and interviews in coastal villages of Taliptip and Bambang. Around the same period, the locals were being told by this or that local government executive that they shouldn’t join groups criticizing the project.

The locals would only learn this February that the surveys and interviews of 30 “fishpond caretakers” Silvertides said they conducted were requirements for the SMC contractor to get the DENR nod for reclamation.

Despite the fact that the fisherfolk were receiving news affecting their future only in trickles, in October some of them braved it out to establish the Network Opposed to Reclamation/Aerotropolis.

In November, fisherfolk, church workers, and environmental activists from Bulacan to Cavite gathered at the Department of Environment and Natural Resources (DENR) to file a Manila Bay-wide complaint calling on the Duterte government. They asked the DENR to deny erring land reclamation projects their environmental compliance certificates (ECC) and area clearance permits.

In a statement, Leon Dulce, national coordinator of the Kalikasan People’s Network for the Environment (Kalikasan PNE), said, “not one of these reclamation projects have passed key international human rights guidelines such as the UN Guiding Principles on Business and Human Rights and the OECD Guidelines.”

These guidelines for businesses include compliance to civil, political, and socio-economic rights policies in the Philippines, adopting internal human rights policies and contributing to the implementation and development of State policies, conducting due diligence in assessing and addressing rights concerns, and cooperating with legal remedy mechanisms.

Gauging from reports of affected locals from Cavite to Manila to Bulacan, the reclamation projects, said Dulce, have apparently grossly bastardized the public participation mechanisms and environmental regulations of the Environmental Impact Assessment process. The group also blasted the reports that critics of reclamation were being harassed.

Asking the DENR to side with the fisherfolk against reclamation, they reiterated that “There is no reason not to respect democratic procedures, even for the aerotropolis that is an unsolicited proposal not yet governed by the formal regulatory process of the State.”